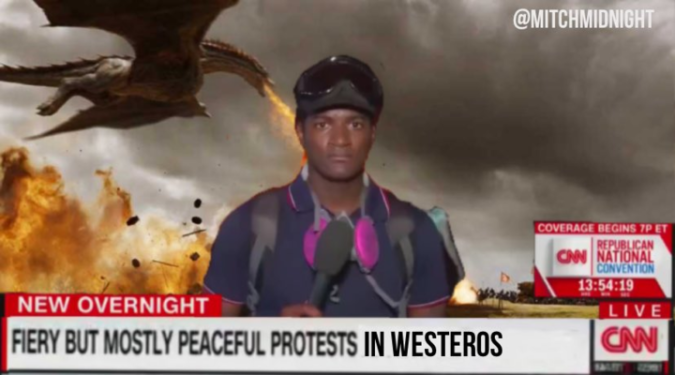 (I told you there would be more)

1. Kudos to luckyesteeyoreman, the venerable EA commenter who exactly predicted what Joe Biden’s ventriloquists would have him say about the riots, aka “the angry genie the progressives will never get back in the bottle”: The violence is “Donald Trump’s America.”  Lucky bested me: I never thought even the Democrats could be that incompetent. By claiming that the riots are the President’s fault, he sends exactly the opposite message from the one he needs to send,which is that the riots are not being blamed on Trump, but on the Democrats. Biden’s argument, “he made me riot” is one that the campus Left has been justly mocked for, and nobody but cowering college administrators and indoctrinated students regard it as anything but risible.

2. Speaking of things the Democrats and media are having no luck blaming on Donald Trump, Issues and Insights published five charts that nicely debunk the “The pandemic in the US is worse than anywhere!” talking point.  These are the best:

Of course, nobody in their right mind or who isn’t a Times reporter or  works for CNN believes the figures from China, Iran, or Russia.

Then there is this.

3. ‘Oh! Is a black person making such a ridiculous argument? Then we agree completely!’ But seriously, folks, I don’t understand how anyone can let someone get away with this. The Whitney Museum of American Art  canceled an announced exhibition after “artists of color” objected to the museum obtaining their work charity sales “largely meant to benefit racial justice charities.” The artists accused the museum of “trying to capitalize on their work without properly compensating them.”

What? The artists placed their works on sale for a price. The museum paid the price asked. That is “proper compensation.” I know you all are Marxists, but jeez, read a book.

The exhibition was to be called “Collective Actions: Artist Interventions in a Time of Change,” and would  feature work by artists who participated in projects responding to the Wuhan virus  pandemic and Black Lives Matter demonstrations.

About 80  artists received emails saying that their work would be included in the exhibition, which was scheduled to open on September 17. When one artist learned in the email that the museum had obtained an untitled print that she had made available to See in Black, a coalition of Black photographers that sold artists’ work at the reduced rate of $100 per print (Usually she sells her print for much more) to benefit Black communities, she was outraged.He  intention behind donating her work was to put art in the hands of people who weren’t typically able to afford it, but The Whitney, she reasoned, was able to afford it. The artist wrote back, “Not that you even deigned to ask me, but NO you cannot exhibit my work without my permission.”

Yes, you idiot, it certainly can, just as I can drive my used car without getting permission from the previous owner. You sold the work. It’s not yours any more. As a non-profit operated by donated funds, a museum is obligated to spend as little of its money as possible. If an item is put up for sale at a discount, anyone can purchase it, and there is no “exploitation” involved.

The Whitney, by giving any credence to this crazy complaint, is engaging in Affirmative Action of Bad Ideas.

The impulsiveness and grandiosity, the bullying and vulgarity, were obvious from the beginning; if anything, they accounted for Donald Trump’s anti-establishment appeal. For the nation’s  unpopular conservative elites, his energy and theatrics made him an enticing partner when he became President… But anyone who thought — that he would rise to the occasion or be hemmed in by it, becoming a dignified statesman who sought compromise — was summarily purged from the system that conservatives assumed they controlled. An utter impossibility had become the indomitable reality.

I’m sorry—that’s not quite accurate. Where I wrote “Donald Trump,” the actual paragraph reads “Hitler.” Where I wrote “the nation” it reads Germany, and instead of President, Szalai wrote “Chancellor.” The review is titled in my print edition, “The Lethal Final Years of a Liar, A Tyrant, and Braggart.” (The online version plays it straight, calling the review, “In the Second Volume of ‘Hitler,’ How a Dictator Invited His Own Downfall.”)

5. I hearby pledge and swear...If I am ever in a D.C. restaurant, and a mob of Black Lives Matter assholes burst in shouting “”silence is violence,”demanding that I and everyone else raise their hands to indicate solidarity with the goals of BLM, I will NOT raise my hand. I will stand up and loudly tell everyone in the room that they must not comply with such bullying, and if the owner of the establishment does not do everything possible to protect me and other diners, I will empty my savings to make sure the restaurant suffers for it. I will not kneel before dictators and tyrants, which is what these thugs aspire to be, and shame on any fellow citizens who will.

Those who have been meekly complying with these totalitarians are a disgrace to the nation. The proper response to bullies is to tell them to go to Hell, and have the guts to face them down.  Writes Robby Soave at Reason,

“This is the Evergreen College model of social justice deployed off-campus. Readers may recall the infamous 2017 episode involving a progressive professor who was forced to leave campus after drawing the ire of activist students. These students then essentially physically cornered the president of the college and refused to let him leave a meeting until he accepted their demands. In 2020, these theatrics are by no means confined to a college campus: Last night, activists walked the streets trying to bully people into submission. It’s a poorly considered tactic almost perfectly calibrated to breed resentment toward the very cause it purports to serve: racial justice.”

How does forcing someone to say they support you serve any cause, other than acquiring power? I won’t repeat the whole spiel again, but such protests advance no legitimate causes at all. In my view, the current bullying tactic by the presently virtue-anointed mobs of violent assholes continues a spectrum begun in 2016 by the cast of Hamilton, when it ambushed Mike Pence. Fairness and civility mean nothing to such self-righteous individuals, and those who actively or passively support them and their tactics should, and I think will, pay a high price.

The usually respectable Soave grovels a bit in his critical article, calling Jacob Blake’s shooting the “horrific and unjust police shooting of a black man.” I’ll give him a pass on “horrific,” but it is irresponsible and unethical to call the shooting “unjust.” Blake was resisting arrest and trying to flee The officers had already tazed him. If he reached into the car in what appeared to be an effort to grab something, the police had reason to shoot. It doesn’t matter whether there was a gun or not: that’s pure moral luck. The police deserve the presumption of a righteous shoot.