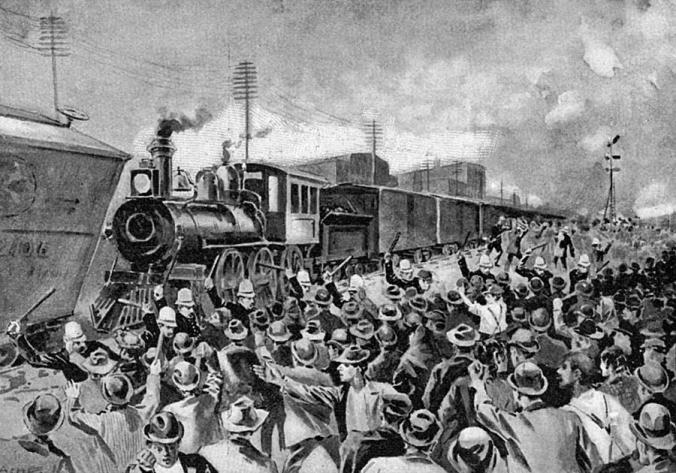 It may be hard for Americans to get inspired to celebrate Labor Day for what it is supposed to honor, especially with teachers unions working to keep America locked down and students barely educated in pursuit of a partisan political agenda, and pro athlete unions bullying sports leagues into ruining their product by turning them into political propaganda vehicles, and the postal workers union partisan bias eroding trust in the upcoming election. Nonetheless, there is a good reason to celebrate Labor Day.

This Ethics Alarms post from 2012 explains what that reason is.

Labor Day commemorates one of the great ethical victories of American society, and not one in a hundred Americans know it. Labor Day marks the end of summer, and a time for retail store sales, and the last chance to get away to Disney World, but few of us think about the real meaning of the word “labor” in the name, and how it is meant to honor brave, dedicated men and women who fought, sometimes literally, the forces of greed, political influence, wealth and privilege in this country to ensure a measure of safety, consideration, fairness and justice for the hardest working among us.

Today labor unions are controversial, and with good reason. Many of them have been run as criminal enterprises, with deep connections to organized crime; many operate in a blatantly coercive and undemocratic fashion. Union demands and strong-arm tactics, while providing security and good wages to members, have crippled some American industries, and limited jobs as well. Today the unions  get publicity when one of them tries to protect a member who should be punished, as when the baseball players’ union fights suspensions for player insubordination or even drug use, or when school districts are afraid to fire incompetent teachers because of union power, or when the members of public unions protest cutbacks in benefits that their private sector counterparts would be grateful for. It is true that today’s unions often embody longshoreman philosopher Eric Hoffer’s observation that  “Every great cause begins as a movement, degenerates into a business and ends up as a racket.” *

That not what Labor Day honors, however. It is celebrating the original labor movement that began at the end of the 19th century, and that eventually rescued the United States from an industrial and manufacturing system that was cruel, exploitive, deadly and feudal. Why the elementary schools teach nothing about this inspiring and important movement, I do not know. I suspect that the story of the American labor movement was deemed politically dangerous to teach during the various Red Scares, and fell out of the curriculum, never to return. Whatever the reason, it is disgraceful, for the achievements of the labor movement are every bit as important and inspiring as those of the civil rights movement and the achievements of our armed forces in the protection of liberty abroad.

One could argue that the movement began in 1886, when a peaceful labor rally in Haymarket Square in Chicago suddenly turned violent after police arrived and ordered the meeting to end. A bomb was thrown into the crowd—no body knows by whom—and the police reacted with gunshots shooting and by beating the crowd with clubs. Within minutes, eight people were killed, and over 120 police and onlookers were injured. The police seized the opportunity to arrest eight so-called “anarchists” (that is, pro-labor advocates), and authorities charged them with conspiracy to commit murder, though there was little evidence and the police themselves had sparked the riot. One of those arrested, Oscar Neebe, made a speech at the trial that provides a partial picture of  the status of the American worker at the time:

“I saw the bakers in the city were treated like dogs. I helped organize them. That is a great crime. The men are now working ten hours a day instead of 14 or 16 hours…that is another crime. And I committed an even greater crime than that. I saw in the morning when I drove away with my team that the beer brewers of the city went to work at 4 o’clock in the morning. They came home at 7 or 8 o’clock at night…they never saw their families or children by daylight. I worked to organize them. That is a great crime.”

Neebe and six others were sentenced to death after that trial—one of the jurors was a relative of one of the dead police officers—and the war between business and labor was officially on, with the newspapers and government firmly allied to business. Labor organizers were regarded as criminals.

In 1893, the Pullman Railroad Car Company responded to a recession by cutting wages 25 per cent to preserve its huge profits. Pullman’s workers were living in an infamous town built by George Pullman and run like a medieval manor, with Pullman as king. He owned everything, the stores, even the churches and libraries. One Pullman worker said, “We’re born in a Pullman house, fed from the Pullman shop, taught in the Pullman school, blessed in a Pullman church, and when we die, we shall be buried in the Pullman cemetery and go to Pullman Hell.”  The workers went on strike, and when it began to wain, and Eugene V. Debs’ American Railway Union ordered a full-scale national strike in its support. By the summer of 1894, 125,000 railroad men were on strike across the country, freezing transportation on twenty railroads in 27 states. The  railroads demanded federal intervention, and the courts obliged, issuing injunctions banning the strike as unlawful. Federal troops arrived to enforce the injunctions in Chicago, the railroad industry’s center. There were riots, fires, shootings, and 34 deaths, most of them victims of the troops. But the violence was spun by the news media, and it turned public opinion against Debs and the workers. The strike was broken. Naturally, they indicted Eugene Debs.

He was defended by Clarence Darrow, 40 years before the Scopes Trial and at the beginning of more than a decade as the nation’s top crusading pro-labor lawyer. He told the jury,

“This is a historic case which will count much for liberty or against liberty. The charge of conspiracy, from the days of tyranny in England down to the day George Pullman used it as a club, has been the favorite weapon of every tyrant. It is an effort to punish the crime of thought….It is an effort to keep the powerless in chains, by denying them the right to make up in numbers what they lack in wealth. Oh, there is a dark conspiracy here, have no doubt of that. There is a conspiracy against Eugene Debs, a conspiracy sinister and far-reaching. The conspirators are George Pullman and the legislators he buys; the conspirators are the courts, which twist and warp our laws to protect the guilty; the conspirators are the soldiers and the police, who use deadly means against those whose only crime is to be hungry.”

Debs went to jail, but a little progress was made, and there was more to come. Also to come: more strikes, riots, indictments, trials and deaths…also more courage and sacrifice. Over the next century other martyrs and heroes joined Neebe, Debs, and Darrow: Albert and Lucy Parsons, John L. Lewis, Mother Jones, Cesar Chavez, Jane Addams, Samuel Gompers  Rudy Lozano, Joe Hill,  A. Phillip Randolph, Addie Wyatt, and many others, some whose names are lost to history. Those dediacted Americans and the citizens who followed them personify what Labor Day commemorates, for they won us a nation without child labor, with fair wages and reasonable work hours, with employee benefits and genuine concern for employee safety, and where greedy, cruel and unjust employers are restrained by laws and regulations, not protected by them. How this was achieved is an epic story that all Americans should know and take pride in, on this day and every other.

That we do not is a national shame.

* This is how Hoffer’s quote is commonly paraphrased today. What he actually wrote (In his 1967 book, “The Temper of Our Time”) was “What starts out here as a mass movement ends up as a racket, a cult, or a corporation.”

10 thoughts on “From The Ethics Alarms Archives: “The Forgotten Meaning of Labor Day””