Apropos to this morning’s post: I just read a thread on Facebook entirely populated by people I knew, some of whom have befriended me. They are mostly lawyers, and after reading what was written, I could only comment that their conversation was deranged. I didn’t feel like arguing with people who could really write that if the Democrats didn’t win in November, Americans would lose their civil rights (when it is the ideological compatriots of these individuals who are stripping away the rights of free speech and association, championing race-based policies, and condemning the President for insisting that universities observe due process when a student is accused of sexual misconduct. How can they write that? What happened to them? Then there was the section of the thread in which they discussed that the President was certain to refuse to leave office if he is defeated, and my personal favorite, the assertion that those defending Kyle Rittenhouse are racists.

These are lawyers. They were taught about the requirement that every individual has a right to a fair trial, which means that he or she must not be pronounced guilty in the court of public opinion before all the facts are known, and proven guilty beyond a reasonable doubt. They should know, as I do, D.C. Rule of Professional Conduct 1.2 (b), which says, “A lawyer’s representation of a client, including representation by appointment, does not constitute an endorsement of the client’s political, economic, social, or moral views or activities.” Moreover, it is very likely that Rittenhouse, if he is ever tried, will be found not guilty. Did these deranged lawyer watch the video? I hope not, or they have really lost it. Rittenhouse acted in self-defense, and appears to be in the process of being railroaded by a racially biased justice system in Wisconsin, driven by the media and uninformed public opinion. I’ve seen the video. I’ve also been a prosecutor. I would not charge him, just as would not charge the officer who shot Rayshard Brooks in Atlanta. I’ve also been a defense attorney, and  I would take on Rittenhouse’s defense confident that I had a winning case.

I also was struck by the snide comment about those who object to “Black Lives Matter” signs being obvious racists. I flagged that group as being a racist hate group when it first raised its ugly, divisive head, and damn right I object to seeing signs extolling a group responsible for riots, arson, and terrorizing diners in D.C. by demanding that they raise their fists.

Finally, these formerly rational professionals—who were once even as you or I! —-had the gall to talk about how Republicans and conservatives were promoting violence and a civil war. Yes, the end of the spectrum that includes the antifa, the rioters, and a party that has worked for four years to undermine our democratic processes, is really accusing others of seeking division and violence. This warrants FOUR standard Ethics alarms clips: This one,

…this one, of course,

…I have to use this one, though these people one were not morons…

1. Speaking of Ethics Estoppel...CNN’s Don Lemon told Mediaite that he’s “embarrassed” because Fox News isn’t objective. Don Lemon, the only news anchor in broadcasting history who has appeared on the air drunk on the air, who has been a shill for the Democrats and progressive agenda items repeatedly, who recently rationalized rioting until, as he said, they began to affect the polls, and who works for CNN, which has now become a full-fledged voice of “the resistance,” is embarrassed for another network.

Well, I guess it’s good to know that something can still embarrass him.

2. Not that I expect any credit or anything…around an hour ago, both Legal Insurrection and Ann Althouse made the same observation I did last night in a post, 15 hours earlier, about how Fox News did not “confirm” the rumor about the President denigrating fallen U.S. soldiers, but only confirmed that anonymous soldiers said he did. 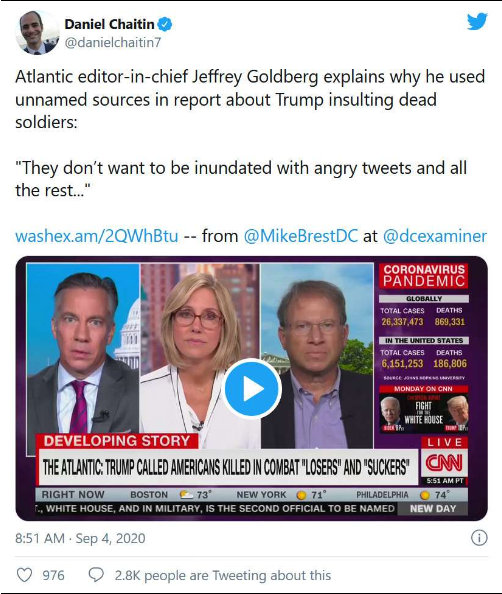 I would expect that any source, especially of dubious information, doesn’t want their name attached to it because they fear something. Too damn bad: if you won’t stand behind your claim, shut up, and if a news source can’t get a source to go on the record with a story, there is no story. And if you are trembling in terror over mean tweets (Wasn’t that a famous Scorcese film, “Mean Tweets”?), then get off Twitter…

4. And while we’re on the topic of that apparent Big Lie,

5. Good! From CBS: “President Trump is ordering federal agencies to stop funding training on topics including “critical race theory” and “white privilege” with taxpayer dollars, according to a memorandum from the Office of Management and Budget Director Russell Vought that was released on Friday.”  My question: What took him so long?

“It’s absolutely astonishing how critical race theory has pervaded every institution in the federal government,” Chris Rufo, research fellow at the Discovery Institute, told Fox News’s Tucker Carlson earlier this week. No it’s not! That was Barack Obama’s doing, as part of what we now see was the most destructive, retrograde, divisive race relations policy since Woodrow Wilson.

Since I have been a bit rough on Ann Althouse of late, I should note that this bit in the Washington Post report, apparently made her non-partisan head explode:

M.E. Hart, an attorney who has given hundreds of diversity training sessions for businesses and the federal government for more than 20 years, said] “If we are going to live up to this nation’s promise — ‘we hold these truths to be self-evident, that all men are created equal’ — we have to see each other as human beings, and we have to do whatever it takes, including taking whatever classes make that possible… These classes have been very powerful in allowing people to do that, and we need them more than ever. There’s danger here.”…

Why didn’t The Washington Post find someone better than Hart to quote about the value of training federal employees in Critical Race Theory? It’s Hart’s business to sell this training. That’s the ultimate bias. Instead WaPo pads its article with prods to think of Trump as some sort of racist:

“Trump has put himself at the center of intense national debates about race, police tactics, the Civil War and the Confederate flag. Democrats have long taken aim at Trump’s comments about race, including his false assertion that former president Barack Obama was not born in the United States. And this year, as numerous Black Lives Matter protests occurred around the country after police officers killed or shot Black Americans, Trump has sharply criticized social justice protesters and called for law enforcement to crack down.”

Trump has sharply criticized social justice protesters? When did he criticize the protesters? Is WaPo using the word “protesters” to refer to the rioters, looters, and arsonists? Here’s a higher level question for WaPo: Do you understand Critical Race Theory deeply enough to know whether it would include rioters, looters, and arsonists in the category “protesters”? Please show your work. I’m tired of the mushy insinuations. I’m reading WaPo this morning after taking a break from it and so far it’s making me sick.

Ah! Thank-you, Ann, for reminding me why I stopped subscribing to the Post.

19 thoughts on “Saturday Morning Ethics Warm-Up, 9/5/2020: Welcome To The No Nervous Breakdown Zone!”