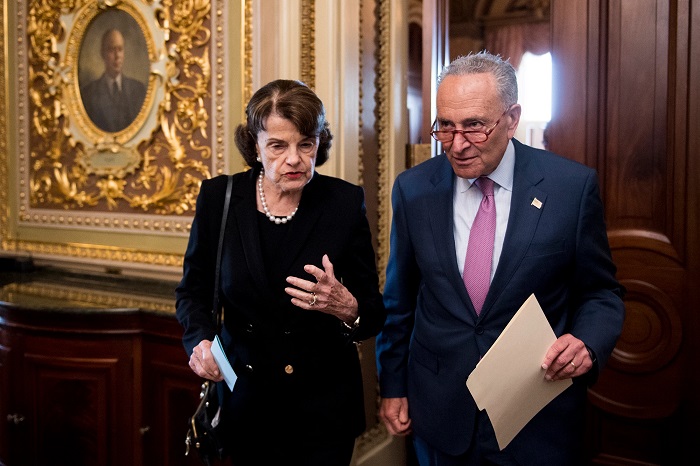 As the election draws nigh, I am thoroughly sick of writing, “If the Democrats had any integrity, they would…” and I’m sure you, faithful ethics fan, are sick of reading it. Quite obviously the current Democratic party cares no more about integrity than they do about process, the Constitution, civility, or trying to avoid dividing Americans.

But I admit, as an ethicist, the flagrant hypocrisy I have seen virtually every day since the Democrats decided that destroying a President was more important than preserving American democracy is depressing, and often frightening. Yesterday, Joe Biden raised the specter of Joseph Goebbels in reference to President Trump, when it is his party—and he—who have used the Goebbels’ Big Lie tactic repeatedly, as Ethics Alarms has documented extensively. The fact that Biden is his Party’s nominee is as gross an example of hypocrisy as ever witnessed in American political history: the same party that spent two years insisting that sexual assault and sexual harassment disqualified prominent men for positions of power in all fields, and that women had a right to be believed when they accused men of abusing them, chose a man whose habit of sexual harassment is decades long and a matter of photographic record.

Last week, it again was the feminist base of the Democratic Party that was abused, but never mind: clearly these women have no more integrity or ethical principles than the men they pimp for. They are in the right party, obviously—they one that postures without meaning what it says.

At the conclusion of the Amy Coney Barrett Judiciary Committee confirmation hearings, ranking Democratic Senator Dianne Feinstein, foolishly believing that statesmanship, comity and collegiality were still values the Senate was supposed to embody, commended Committee Chairman Lindsay Graham for his leadership and said it was “one of the best” hearings she’d ever been a part of. She then hugged him.

Yet yesterday, as if that was all a mirage, there was Feinstein standing submissively behind Chuck Schumer on the steps of the Supreme Court, as the Minority Leader Chuck Schumer said that his fellow Democratic Senators  had boycotted the committee vote because it was an “awful, awful hearing.” Schumer had, we were told, had a little talk with the oldest Senator in the body, apparently warning her to expect a horsehead in the bed if she didn’t meekly toe the party line, even though she thought she was doing that. Remember “when they go low, we go high?” Remember all of Feinstein’s party’s blathering about Democratic norms? Restoring bi-partisanship in Congress?

I guess I imagined it all, but I didn’t imagine Feinstein’s salute to Graham and the hug; after all, it was in the same week. It’s not like Joe Biden denying that he accused Trump of being “xenophobic” when he curtailed flights from China, or that he said he would ban fracking,  After all, those statements were made a while ago, and Joe can’t remember that far back.  Is even older than Joe, but she hasn’t shown quite his level of cognitive decline; she knew that she was being humiliated, the message being sent that she was wrong and foolish to praise the hearing, and had been forced to recant.

The scene put me in mind of the moment in “Jaws” when the toady Amity medical examiner, who had officially decreed that the half-eaten torso of a young woman on the beach showed evidence of a shark attack, casts his head down after being obviously worked -over by the mayor and says that she was the victim of a boating accident. But that character was weak, old and irresolute: Feinstein is a U.S. Senator, and as a woman in the Senate, supposedly an example and a role model. The Democratic party and its allies have also been grandstanding over “the patriarchy,” indeed, that was part of the assault on Comey.

Why, look! It’s Mandy Patinkin, back on Ethics Alarms for the second time in 24 hours!

It’s flagrant patriarchy when a woman makes her opinion known, and a man forces her to flip-flop. I’m not always reminded of movies; sometimes I’m reminded of real life. In 2017, Mitch McConnell used a Senate rule prohibiting personal attacks on other Senators to shut down typical Elizabeth Warren demagoguery aimed at the character of Jeff Sessions, then a Senator and seeking confirmation of his nomination to be Attorney General. “Sen. Warren was giving a lengthy speech,” the GOP Senate leader explained. “She had appeared to violate the rule. She was warned. She was given an explanation. Nevertheless, she persisted.” Wrote the Washington Post,

[A]n off-the-cuff phrase meant to end a debate was instead turned into a badge of honor by the other side. #ShePersisted, #LetLizSpeak and “Silencing Elizabeth Warren” were among Twitter’s top trending topics in the United States by Wednesday morning. Women in particular bristled at the sentiment — essentially, to sit down and stop talking — and noted it was hardly unfamiliar to them… “She was warned.” Words every strong woman has heard from a man at some point in her life.

Democratic feminists evoked the Suffragettes, Rosa Parks, Harriet Tubman, Malala Yousafzai, even Princess Leia in a series of memes. Literally thousands of tweets repeated, “She was warned. She was given an explanation. Nevertheless, she persisted.” But Feinstein didn’t “persist.” That is because, like so many other gleaming principles her party pretends to stand for when it is expedient and means scoring political points against the presient of Republicans, rejecting the patriarchy, as well as avoiding blinding hypocrisy, are not principles the current Democratic Party cares about.