1. It’s not only the obvious hypocrisy and double standard, it’s the fact that they are so shameless about it. Of course, the average low-information voter (or the average partisan hack who likes applying double standards) cheered on Al Gore and the Democrats when they challenged the 2000 election using a shifting set of theories—remember the “butterfly ballot” that sparked the first legal challenge from Al’s lawyers? Then it was the hanging chads. The 2020 election isn’t over and the race isn’t won until every re-count is completed and there is a credible and trustworthy result. The results so far in multiple states are spiderweb thin, and even relatively small instances of voter fraud could change the winner.

As I have already written here more than once since Tuesday, President Trump has an obligation to oversee responsible investigations into questions regarding irregularities in the vote counting and mail-in voting. He is, after all, President for two more months at least. But the Axis of Unethical Conduct is, as it has from the beginning of his term, claiming that what is virtuous and justified when their favorite politicians do it is sinister when Republicans do the same. I have a complete library of asshole tweets to the effect that the latest Democratic coup attempt should be granted instant legitimacy before all of the issues are satisfactorily resolved. Here are two samples,

If you have problems with my characterization of “coup” just now, sorry, I’m not retracting it. The election was not held on even ground, between the news media’s open bias and the use of the pandemic to justify early and inherently corruptible mail-in voting. It is certainly possible that Joe Biden would have won in a fair election, but we will never know that. The price of the party’s “ends justify the means” strategy is that this election can never be regarded as decisive or fair, and expect the Right to act accordingly.

The fact that a news organization or a decision desk has declared Biden the winner doesn’t mean that he is the winner, and if there are valid legal issues and voting questions to be settled, we should settle them now, because we know they won’t be addressed once the Democrats have the Presidency. I also endorse the point made in this tweet…

2. Why is the Smithsonian…allowed to run lightly coded ads urging viewers to  become activists on  issues that “matter” now that the election is “over”?  The election is no more “ over” at this point than the 2000 election was, and maybe I’m paranoid, but I don’t want to see “matter” in a political ad until Black Lives Matter sinks into the earth.

3. What happened to “the Biking Vogels”? I saw my delightful next door neighbors saddle up with their young kids for a biking expedition this morning and suddenly had the unpleasant flashback to the couple I wrote about here ( and on Ethics Alarms’ dead-on-the-web predecessor, the Ethics Scoreboard), who pulled their twin boys out of school to join them on a forced biking trip around the country while the parents collected swag from sponsors. I called it child abuse because that’s what it was, and that would be the case even if, through the mysterious ways of pure moral luck, both boys grew up to be mentally and emotionally healthy and productive members of society. Such stories that were extensively covered by the news media usually have “What ever happened to..?” follow-ups by this time (it’s been over a decade), but there is nothing. The family’s self-promotional Facebook page is down, and Nancy Vogel has me blocked on Twitter, although I never tweeted her.

If anyone knows how the boys are doing, I’d love to do a “the rest of the story” post—especially if the twins overcame their exploitation and abuse and are happy, well-adjusted adults..

4. Interesting ethics observation: My wife noted, as she tossed away a New York Times front page in disgust that had a headline referring to the President’s “spurious” allegations that the Boston Globe managing editor portrayed in “Spotlight” lectures the staff on keeping adjectives out of headlines, explaining that every adjective diminished the credibility of the paper.

5. I see that Nancy Pelosi has claimed that Democrats now have a “mandate.” That’s funny. Back in 2000, when Bush said he had a “mandate” despite losing the popular vote, Democrats suggested that he was obligated to defer to the opposition in policy matters. Well, as Mr. Montoya liked to say,

A mandate occurs when one party and its Presidential candidate wins in a unequivocal landslide. Biden had no landslide, even assuming that his win survives the recounts and lawsuits, which is likely. The Democrats lost seats in the House, and failed to take over the Senate. The claim of a mandate is further evidence of the Orwellian turn Pelosi’s party has taken.

6. And while we’re on the topic of totalitarianism, there is this… 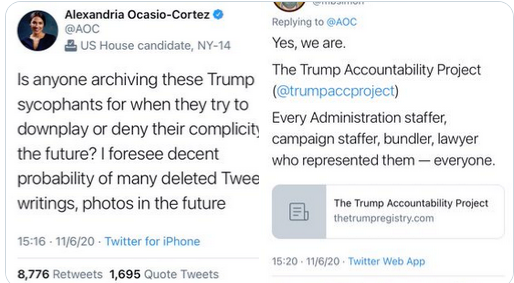 You can explore what the “Trump Accountability Project” proposes to do to take revenge on the President’s supporters here.

7. This just in, from Althouse:

From “The Presidential Endgame” by the editors of The Wall Street Journal (no pay wall). They want a gracious concession — after the counting and litigation — but they never mention how ungracious the Democrats were when Trump won in 2016. Did they ever concede that Trump won and stand back and acknowledge that he legitimately held the power of the presidency?

Of course, Ann could have voted in the swing state of Wisconsin to express her disapproval of the AUC’s treatment of this President, but she abstained.