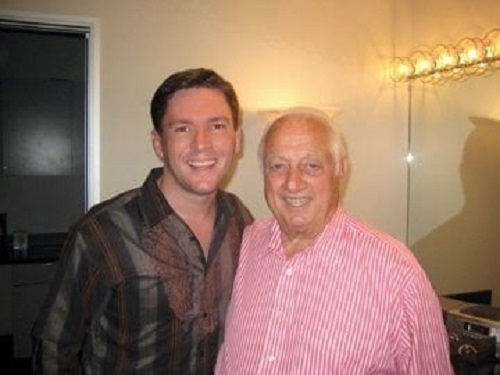 I wrote about my friend Brian Childers, a brilliant actor, singer, and all-around great guy, in this post, “An Act Of Kindness, Danny Kaye And Me : An Ethics Case Study,” from five years ago. It’s worth reading, if you haven’t already or don’t remember it. Brian continues to have a thriving career in New York City, with a successful album, roles in plays and musicals, and periodically, thrilling audiences with his dynamic recreation of Danny Kaye’s legendary one-man performances, the legacy of an adventure he and I set out upon over two decades ago.

I was recently tagged in a Facebook post by Brian, who related for the first time a revealing encounter he had with Tommy Lasorda, the Hall of Fame manager of the LA Dodgers for many years and legendary for his leadership abilities, lovable personality and positive attitude. Tommy died recently at the age of 93, and baseball fan that I am, I had been trying to justify mentioning him in an ethics post. Well, Brian took care of that with his usual flare.

He wrote in part,

I had the enormous privilege to meet this sports legend while performing at the Hollywood Bowl for 3 nights in 2008. The event was called “A Ball at the Bowl” and it was celebrating 50 years of the Dodgers in LA. I was there to sing Danny Kaye’s “D-O-D-G-E-R-S” song and one other with the LA Philharmonic.

Tommy’s dressing room was right across the hall from mine. On the first night, Tommy, whom I had never met, surprised me by knocking on my dressing room door. He introduced himself and was incredibly friendly. When he asked what I was doing in the event, I said I would be singing Danny Kaye’s Dodgers song with the orchestra.

While I was performing, I could hear Tommy in the wings yelling and clapping. When I walked off stage, he pounded me on the back, shouting, “Great job! You hit a home run buddy!”

The the next night, Tommy knocked on my dressing room door again. I opened the door and just like the night before, he started coaching. “ OK, Last night was great, but you can do even better tonight!” he said. “You gotta go out there and really show these people what you got! I’m rooting for ya, man! Keep your focus and bring it home!” And again, he stood in the wings, clapping and yelling and cheering me on.

The third night came around, and…you guessed it! Knock, knock, knock…”YOU GOTTA BE BETTER THAN THE OTHER TWO NIGHTS, YOU GOTTA KEEP TOPPING YOURSELF! I DON’T KNOW HOW BECAUSE YOU HAVE BEEN KILLING IT, BUT YOU GOTTA GIVE THAT AUDIENCE THEIR MONEY’S WORTH! And while I sang that final night, Tommy Lasorda again yelled, cheered, and clapped from the wings like the inspirational manager he was. When I got off stage, he gave me a big hug.

Tommy was such a fan of my performance that he lobbied the Dodgers into inviting me to come back to Dodgers Stadium that season to sing the National Anthem as well both of songs I sang at the Hollywood Bowl.

It was a great thrill to have met him and be coached by this living legend. Rip Tommy. I know you are cheering me on from that Dugout in the Sky.

My great thanks to Brian for allowing me to post this.

What my friend experienced was a kind man and instinctive leader who set out to help a stranger succeed by applying the special skills he had developed over a long career, even though it might have seemed to some that he was overstepping his authority. This kind of generosity and unfiltered good will is, unfortunately, rare, and it is especially rare coming from “the rich and famous.”

Lasorda also was fortunate in his choice of coaching targets. There are many performers—believe me, I know— who would not have appreciated the old manager’s unsolicited advice, but Brian is a kind and empathetic man, and also smart. He recognized a gift when he saw one, and behaved ethically. And he was rewarded for it!

Such spontaneous interactions make all participants better and happier human beings, and multiplied millions of times, can make the world a far more pleasant place for us all.

Leave a Reply to Rich in CT Cancel reply