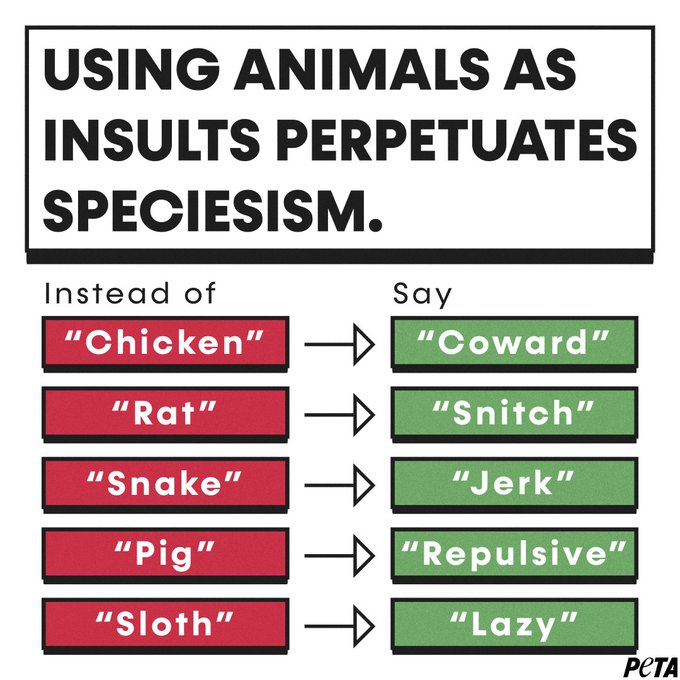 It doesn’t matter what words, phrases or expressions politically-motivated censors try to eliminate from the language, be it gender pronouns, “retard,” fuck,” “nigger” (or “niggardly”), “bitch,” “Karen,” or “master; ” “a chink in the armor,” “sexual preferences,” “Illegal aliens,” or “anchor babies.” The intent is to limit the ideas that can be expressed, and, eventually, thought. The principle is pure Orwellian linguistic: what the brain can’t express, it can’t imagine. The technique is unethical; worse, it’s a weapon against democracy and freedom of thought.

PETA, the U.S. organization that most egregiously misuses the word “ethical” in its name (with CREW, Citizens for Responsibility and Ethics in Washington is a close second) would like to erase the boundaries between human beings and animals in law and culture. Thus it must have seemed like a natural progression to them to come up with “speciesism,” a form of alleged bigotry in which humans view themselves as superior to animals, just because they are. Hence the new directives above. PETA wants dictionaries to excise from the language derogatory metaphors involving certain animals. “Animal-related slurs used to debase humans reinforce inaccurate and harmful characterizations of animals,” PETA says.

“Oh, shut up and get a life, you silly people,” Ethics Alarms says. Animal metaphors and comparisons contribute to the richness of language and literature, and unlike negative characterizations of human individuals and groups, nobody’s feeling are hurt, because, see, one of the reasons humans are superior is that they can read and understand complex language.

The group didn’t give this latest effort to get publicity very much thought. Why are only the animals above—chickens, dogs, rats, snakes and pigs singled out? Why not cats (Scaredy!), foxes (Sly!), mules (Stubborn!), plus sheep, hyenas, lions, …heck, there are more than a hundred of them. All of the metaphors aid in communicating ideas and images. Losing such expressions simply makes our language less rich and useful, and comprehension of the world more difficult to define.

PETA hasn’t considered how it will distinguish an “inaccurate,’ representation either. Is “drinks like fish” offensive to fish? Does anyone think it is a literal description of what fish do? “Skunked” means to defeat decisively. How does that even relate to the animal? Are positive metaphors OK with PETA, even if they are inaccurate too? Wise as an owl? Owls are dumb. Loyal as a dog? It’s usually true, but it demeans the dog as some kind of blind follower. Are such metaphors negative because they are stereotypes?

I don’t think whoever made that chart knows what the metaphors using the animals chosen are. “Rat” doesn’t just mean “snitch,” it also means a traitor, or a mean person. “Pig” doesn’t just mean “repulsive”—it may mean a misogynist or a glutton. Who uses “snake” to mean “jerk”? “Snake” is generally used to describe someone who is untrustworthy and diabolical; it’s a literary allusion to the Bible story of Adam and Eve. Many of the animal metaphors are based on myths, legends and folk tales. Banning the metaphors leads directly to banning the stories.

PETA is obviously making its move as the ascendant progressives try to make censorship and thought control acceptable, and ultimately mandatory.

What a bunch of jackasses.

20 thoughts on “Yet PETA’s Campaign To Limit Speech Is No More Unethical Than Other Attacks On Freedom Of Expression, Just More Self-Evidently Stupid…”