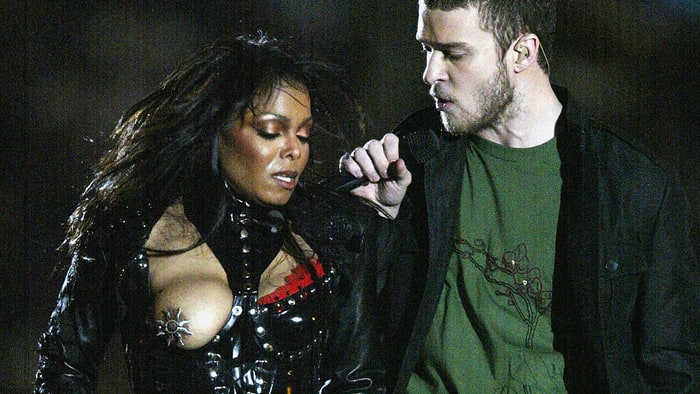 Today is the anniversary of Nipplegate, which, you probably recall, is when Janet Jackson and Justin Timberlake executed their juvenile plot to get cheap publicity by flashing her breast during the 2004 Super Bowl XXXVIII half-time show (back when I watched the Super Bowl in my ignorance of just how vile the NFL was) and began lying about it. By the time the dust cleared, the Federal Communications Commission had received 540,000 complaints about the incident. Viacom, CBS’ parent company, received the maximum fine the FCC could issue for such offenses, and paid $3.5 million to settle indecency complaints about the broadcast.

Ethics Alarms has featured two reflections on that incident. One was a rebuttal, an easy one, of pop culture pundit Emmanuel Hapsis’s ridiculous analysis, declaring the episode as exemplifying America’s “patriarchy,” “racism” and “sexism.” I wrote then, tongue piercing my cheek, that “obviously no white singers flashing ten-year-olds in TV land would be criticized, and no male singer who decided to let Mr. Wiggly make a guest appearance would be similarly pilloried.” I received a wave of really nasty comments on that one, highlighted by someone named Troy whom I honored, sort of, with a Comment of the Day in 2018. I’ll revisit it with pleasure now, since it’s short, funny and stupid. He wrote,

Madonna’s white ass has been showing her boobs, coochie and anything else that is of a sexual nature all through the late 80’s up until today…and though she got criticized for her antics, even pissing off the Catholic Church with her attention seeking ways, as soon as a black woman gets’ exposed by a this privileged white boy, then the whole white world screams OMG, OMG, hang her, nail her to the cross…blame her, blame her…this whole fiasco is reminiscent of how whites back in slavery times would lynch blacks for solely being black and then again in modern times how white people can cuss a police officer out, spit in their face, fight them and get taken to prison to cool off with only a slap on the wrist…but a black person get’s pulled over and by a white officer for having expired license plates or a busted tail light and they never make it to jail, they are taken straight to the morgue, because like what White Boy Privileged Justin did to Janet, it becomes a black issue and she was the only one who got blamed, black balled and even her apology was not enough for the privileged whites, she had to PAY and pay dearly. So for all those white privileged reading this article, and saying she does not deserve an apology, I GET IT, you all want her HANGED…It’s what you all believe to be punishment to the full extent for this black woman, who has NEVER, EVER been in any trouble, caused any drama and had been low-key, and private all of her life until that one millisecond to be torn to shreds by the white privileged…well for those of us who are WOKE, we see What Madonna has made a career of doing, Janet should get the death penalty. So white privileged of you all.

“Madonna’s white ass has been showing her boobs” might be my favorite phrase to appear on this site in ten years.

It’s also disturbing to realize that Troy could probably be elected to Congress today with that level of analysis. But I digress.

The unexpected reappearance of The Ethics Scoreboard online now gives me the opportunity to re-post the commentary there about “Nipplegate” written shortly after it all occurred. So, in commemoration of that ethics train wreck, and also because I wouldn’t change anything I wrote then, here is an encore, slightly edited, of “The Breast,” from February 11, 2004.

Has too much been written and spoken about Janet Jackson’s Superbowl surprise already? At the risk of annoying those who want to scream “YES!!,” I must weigh in on what can only be called an ethics train wreck. Let’s recap the culprits, and their ethical offenses:

These are the obvious villains in this drama, but the more lasting damage may have come from a different source: the commentators, writers and pundits who have taken the position that all the breast-beating over Jackson’s choreography is much ado about nothing. “Cross-Fire” combatant Paul Begala was typical of this group, ridiculing FCC Chairman Michael Powell’s vow to seek penalties. “Americans are dying in Iraq, people are out of work, and the administration is worried about a naked breast? Come on!” he bleated.

Thus do some always relegate matters of propriety, public demeanor, manners, gentility, dignity and regard for others to the back of the line. There are always matters of life and death, and so there is scant conduct so objectionable that they will not advocate “letting it go” and “moving on” to the really important things: world peace, the poor, the environment, racism, crime. And these are really important things, but so are maintaining societal values, communicating them to our children, and reinforcing them by expressing clear and unequivocal disapproval when they are undermined.

Decades ago, the late Daniel Patrick Moynihan took off from James Q. Wilson’s observation that the failure to fix a broken window could accelerate a neighborhood’s slide into urban decay with his own phrase, “defining deviancy down.” The Jackson debacle was an attempt to do just that, and is like a broken window in our neighborhood of values, which has too many of them already. The alternative to fixing it is the slippery slope: constantly escalating violations of taste and propriety until community values are permanently eroded, and the community itself is more coarse, more selfish, more brutal. Conservative talk-show hosts would have us believe that this is the agenda of Paul Begala and his ilk (whatever his “ilk” is). Nonsense. They mean well; they are just wrong. But their lack of bad intentions doesn’t make their embrace of ethics laissez-faire any less destructive.

Thanks to Jim Hodgson for correcting my 16-year-old mistake confusing Moynihan with Wilson.