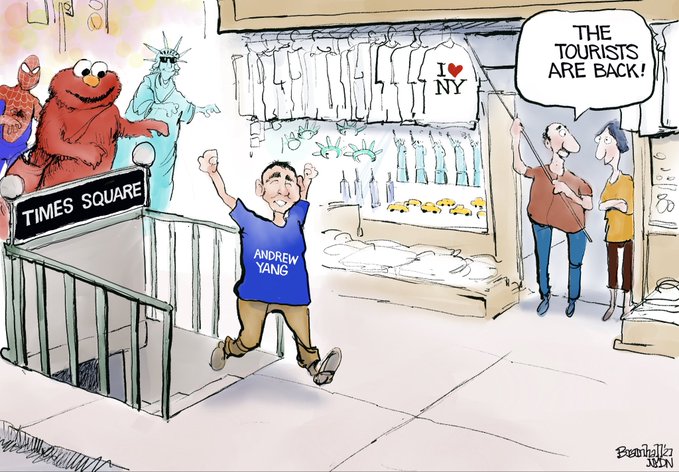 Some day, in a more mature and enlightened America, we will have non-male and non-white candidates for elective office as well as elected officials whose supporters do not use the politicians’ race or gender to unethically intimidate critics by crying “Bigotry!” when there is none. Some day. Or maybe not. Right now, it is clear that such politicians and their supporters just can’t help themselves. It’s cheap, it’s unfair, it’s dishonest, but as Harry Reid ( or Niccolò Machiavelli) might say, “It works!”

It needs to stop working. I consider the routine use of that tactic to stifle legitimate criticism as an valid, if not necessarily decisive, reason not to support female or minority candidates.

The latest despicable example of the practice arrived in New York City, where a mayoral race is heating up. Evelyn Yang, wife of candidate Stephen Yang, attacked New York Daily News’ cartoonist Bill Bramhall for a characature she called a “racist disfiguration” of her husband.

Bramhall, a boringly predictable progressive cartoonist who draws Donald Trump to look like he ate Orson Welles, mocked Yang by exploiting the common complaint that he’s not a real New Yorker, but a carpetbagger who is naive about the ways of The Big Apple. Mrs. Yang, however, tweeted,

“I can’t believe my eyes. To publish this racist disfiguration of @AndrewYang as a tourist, in NYC where I was born, where Andrew has lived for 25 years, where our boys were born, where 16% of us are Asian and anti-Asian hate is up 900%.”

Wow. I can’t wait to hear what Evelyn says after Yang is elected and starts getting serious criticism. Her tweet is hysterical. First, the caricature of Yang is mild in comparison to how he draws everyone else, like himself…

In fact, the cartoon even looks like Yang, unlike…well, here’s a test: who is this supposed to be? 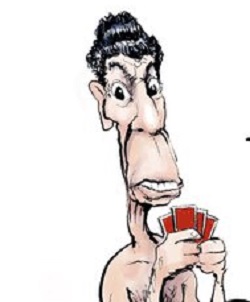 Give up? That’s Gov. Cuomo, but because he’s not black, Asian or female, he just has to take it. Yang’s caricature at least looks like him, unusually so for a political cartoon:

Distorting faces and forms is what political cartoonists do, but the Yangs think that Asian-Americans should be immune. If he were a conservative or a Republican, of course, it would be a different matter.

The rest of the tweet just piles on irrelevancies. The cartoon was inspired by Yang’s tone-deaf comment that his favorite subway stop was in Times Square, a common tourist opinion. It couldn’t matter less that Mrs. Yang was born in New York City. And she’s seriously suggesting that the cartoon risks triggering “anti-Asian hate”? Ridiculous. And she got even more ridiculous, tweeting this:

OK, we get it: it’s bigotry to ever make fun of an Asian-American, just like it was racist to not worship Barack Obama, sexist to make fun of Hillary’s laugh, and is now racist AND sexist to point out what a grotesque empty suit Kamala Harris is.

I’m waiting for Bramhall, being a good progressive adept at double standards and terrified of being “cancelled”, to grovel an apology to the Yangs and the race-baiters. If, however, he has the integrity to tell her to stuff it, I will move him to the top of my political cartoonist respect list. It’s very short, since I think political cartoons are just bad punditry and anachronisms, but still: he’d be #1.

3 thoughts on “Political Cartoon Ethics: No, There Was Nothing “Racist” About Bill Bramhall’s Andrew Yang Cartoon”