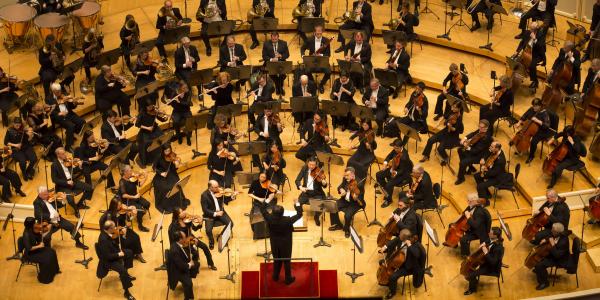 The Comment of the Day that follows by David Rohde is welcome for many reasons. First, he is a professional musician, and a skilled one. Second, he defends the author of piece I criticized vociferously (and will continue to). Third, I think this is an important issue. Fourth,, a new voice here is always welcome, and we haven’t been getting as many as I would like of late. Finally,, as required for COTD, it is well written and worthy of considerations and debate.

Not that I agree with it, but that has never been a criteria for Comment of the Day honors. Here’s David Rohde’s Comment of the Day. on the post, “The Classical Music Critic Of The New York Times Thinks That Symphony Orchestras Should Choose Members According To Race, Gender, And “Other Factors” That Have Nothing To Do With Music.”(I’ll be back with my reaction at the end.)

It may be that using blind auditions has elevated the performance level of symphony orchestras. Or it may be serious overkill in an era of a supply-demand imbalance for classical musical talent. But either way, simply rolling this issue into what I know is this blog’s current obsession with – in other words, against – identity issues misses a lot that’s going on here.

First of all, you have to admit that hiring people without knowing who they are in ANY field is kind of strange. In particular, you certainly wouldn’t use blind auditions to cast people in a show, now would you? I know I know, different genres, different requirements. Roles in theater are individual, while 30 or 40 violinists in a symphony orchestra are doing much the same thing.

But I would argue that live classical music IS showbiz, and the sooner that people in that field realize it, the better. If the product is just “the music,” and many people assert that the overall technical performance level is higher than ever, then why is classical music struggling at all?

Second, I think you have to remember what the main impetus of blind auditions was in the first place. While I’m oversimplifying, the essential problem was (or shortly became) the inability of women to secure places in symphony orchestras. A quick check on YouTube of recent orchestra performances now versus 30 or 40 years ago will demonstrate the resulting change. Part of Tommasini’s argument is not to let solutions to problems become so institutionalized that they run past their sell-by date while different problems fester.

Third, you’re caricaturing Tommasini’s valid argument that different people may bring different skillsets that blind auditions by their very nature ignore and bury. Why shouldn’t certain people’s aptitude or talent for communication and outreach to younger and different audiences be a factor in hiring? In classical music, organizations from symphony orchestras on down often do a superficial form of “outreach” that I personally consider worse than doing nothing at all. Kids of all backgrounds know when they’re being patronized.

I’ve witnessed classical musicians who thrive in this sort of environment, and those who look like they wish the ground would open up and swallow them. If an ensemble is actually called the Anywheresville Symphony Orchestra, how is consistent and comfortable engagement in the real community of Anywheresville not a valid consideration in hiring?

Finally, I think that the usual analogy to sports is off when considering the specific issue of staffing a symphony orchestra, compared to other slots in classical music. In particular, basketball is a poor analogy because of the lopsided nature of won-lost records in that sport and the reality that superstars consistently and predictably do outshine mere stars. If we were talking about soloists performing violin and piano concertos with orchestras, then I could possibly understand the connection and the analogy. But interestingly, there seems to be far more developing diversity in those slots than in the staffing of the orchestras as a whole, so it’s valid to wonder why it doesn’t seem to be filtering down.

I don’t know if I agree with Tommasini, and many people in the instrumental classical world – including even minority musicians – doubt his argument and say either that “blind” auditions end up not being entirely so or that it remains hard to get past the filtering that puts certain candidates and not others in the pipeline. But the assertion that at least considering what he’s saying will automatically make orchestras “worse” is cheap and unsupportable and elides other issues that classical music needs to address to grow its market. I hope this helps.

I know David and respect him. People are always accusing me of being too harsh on new commenters, and I certainly don’t want to discourage him from commenting here often and on a diverse (!) set of issues. On the other hand, I don’t want to prove that I treat friends differently than how I treat commenters I have never met (although, I admit, I have in the past.)

Does it help? Getting a well-articulated rebuttal always helps. It also helps me realize the power of peer group marinating, because the vast majority of those in the arts have a knee-jerk reflex to agree with really bad ideas like Tommasini’s from the Land of Woke. David’s smarter than most of them, thus he is only at the “I don’t know if I agree with Tommasini” stage. There is hope for him. But to be blunt, I still don’t see a valid argument here. Let me examine each of the points raised.

“First of all, you have to admit that hiring people without knowing who they are in ANY field is kind of strange…. “

That’s a straw man. Orchestras don’t hire a complete cipher and throw a hood over his/her face. The musicians get the chance to audition based on a review of their experience and qualifications. If they have a record of leaving other orchestras after short periods, that will be a red flag. If a background check reveals that they are escapees from the Federal Pen, they don’t get hired even after their audition is aces. Presumably if someone “wins” a blind audition and it is discovered that they play the viola with their toes, they still won’t get the job.

“But I would argue that live classical music IS showbiz, and the sooner that people in that field realize it, the better. If the product is just “the music,” and many people assert that the overall technical performance level is higher than ever, then why is classical music struggling at all?”

I’m not certain what his point is here. Sure, it’s show business: is that supposed to mean that symphony orchestras should hire according to appearances? Beauty? Bust size? It’s not a visual art, for the most part: an orchestra that looks great and sounds lousy has no appeal whatsoever. The implication, I think, is the increasingly frequent “audiences want a cast/show/ Presidential Cabinet/jazz band that looks like them” argument. That is itself an anti-American, anti-plurality, anti-democratic mindset that has been weaponized to justify discrimination and bias, and if that IS part of David’s argument, the goal should be to stop encouraging people to think that way. That’s encouraging and validating tribalism. If someone really is less likely to enjoy an orchestral performance of the Carmen Suite because there are not enough Hispanic musicians playing (or too many Asians), then that person doesn’t belong in a concert hall.

“If the product is just “the music,” and many people assert that the overall technical performance level is higher than ever, then why is classical music struggling at all?” There are lots of reasons, and I would put “the racial identity of the musicians” around 7,654 on the list, if it makes the list at all. Schools don’t teach classical music education like they used to. Parents don’t play recordings of Beethoven and Mozart like they used to. The music is old. Modern orchestral compositions, with a few exceptions, have never reached the popularity of the classics of the 19th, 18th and 17th centuries. Orchestras are expensive, thanks to the musicians union. That makes tickets expensive. Live performance arts are declining in all genres, as the public becomes satisfied with electronic and remote–and inferior—equivalents. Hoping, as the comment does, that having “diverse” musicians will make a dent in these impediments is the Mother of All Hail Marys.

On David’s second point: “Huh?” Why is the lack of female musicians a problem, if there 1) aren’t sufficient numbers of them and 2) if they aren’t good enough to succeed in a blind audition? This is a tell: David believes, or has been conditioned to believe, that demographic variations in certain pursuits and occupations due to human preferences and proclivities are a problem that needs fixing. It isn’t. Most dentists are male, because women aren’t drawn to dentistry as often as men are. In the law, most litigators are male, most domestic law specialists are female. Is that a problem? The only problem occurs if lesser qualified and talented people are shoehorned into challenging jobs for the wrong reasons—their chromosome mix or their melanin content.

The third argument, “Why shouldn’t certain people’s aptitude or talent for communication and outreach to younger and different audiences be a factor in hiring?”, deserves the response, “Why should it be?” Orchestras have staffs, fundraisers, PR experts and more. They have their primary jobs. Musicians’ primary job is to play music—and again, I reject the idea that we should encourage a society where people, including kids, must always be taught and communicated to by those who “look like them.” That’s programming bigotry. Unethical…and foolish.

Again, with the fourth point, I’m neither persuaded nor sure I understand, or hope I don’t, what David is getting at. What do won-lost records have to do with anything? In pro basketball, a majority white spectator base supports, and pays for, teams that are 95% black. They care about whether the team can play basketball, not what color the players are, and that’s as it should be. An orchestra is no different. His question evincing suspicion of “why it doesn’t seem to be filtering down,” unless I’m misreading it, seems to be the classic, “Never mind that we can’t see what it is, if there isn’t diversity, there’s racism involved somehow,” in which the intellectually dishonest assumption is that “unequal results” are sufficient to prove systemic injustice. Presumed racism again.

Yup, this blog is focusing on that a lot, because its a society-killer.

But the assertion that at least considering what he’s saying will automatically make orchestras “worse” is cheap and unsupportable and elides other issues that classical music needs to address to grow its market. I hope this helps.

I didn’t say that “considering” Tommasini ‘s argument will make the orchestras worse. Considering is fine: I consider lots of terrible arguments, every day. No, he wrote, “To Make Orchestras More Diverse, End Blind Auditions.” That means that making diversity a priority over demonstrated skill is desirable. If diversity is given priority over ability, then orchestras will sound worse, meaning they will be worse. I guess the scare quotes around “worse” means David thinks, like Tommasini does, that a more diverse orchestra can be better than one that sounds better.

That’s woke nonsense, or if it isn’t, neither Tommasini nor David has made the case that it’s not.

16 thoughts on “Comment Of The Day: “The Classical Music Critic Of The New York Times Thinks That Symphony Orchestras Should Choose Members According To Race, Gender, And ‘Other Factors’ That Have Nothing To Do With Music””