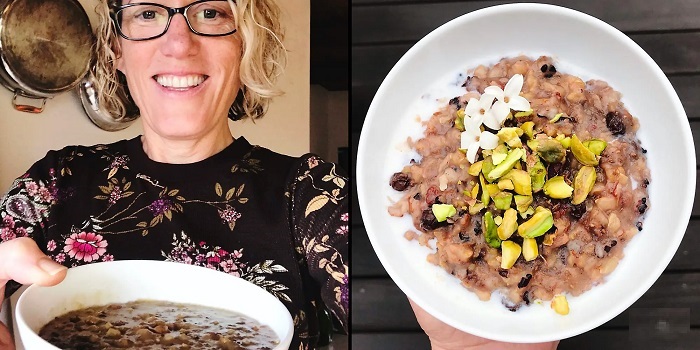 Breakfast Cure, an Oregon company, was attacked on social media by Asian Americans and the Woke Mob of culturally-appropriating congee, a traditional Asian rice porridge. The company sold its version of the dish in pre-packaged meals, and asserted that they were yummy. The problem is that the company was run by…a white woman.

How dare a white woman’s company claim to make a version of congee to fit the ” modern palate” and “improve” a recipe beloved by Asian cultures for centuries? So, as we have come to expect. company exec Karen Taylor begged for forgiveness:

“Recently, we fell short of supporting and honoring the Asian American community and for that, we are deeply sorry. We take full responsibility for any language on our website or in our marketing and have taken immediate steps to remedy that and educate ourselves, revising our mission to not just creating delicious breakfast meals, but becoming a better ally for the AAPI community.“

Power play accomplished! This wasn’t about congee; this was about establishing one group’s power to make another group grovel. As has been the case so many times, a cowardly member of the group being bullied fell right into line. This will, in turn, embolden the bullies and imperil more Americans who only want to exercise their freedom to be creative, and to borrow, use, and improve on other cultures and traditions, as they have every right to do.

Congee is a staple for Asians. There are different versions cooked by nearly every Asian country. In the Chinese tradition, it is a dim sum comfort food with flavors like thousand-year-old-egg, pork, or duck. Taylor’s version adds flavors like apple cinnamon and uses ingredients like oat groat. The only thing she would have to apologize for is if her innovation tasted terrible to everyone. Funny, I don’t recall Italian-Americans threatening the kiss of death for anyone who put pineapple on pizza. (Yecch.) I’m Greek, and Greeks own and operate a dizzying range of restaurants that offer all sorts of cuisines. I had lunch at one in Manhattan that was called “Cuban Falafel.” It was fantastic If some Japanese woman wants to start a business featuring sushi moussaka, I wish her luck, and I hope it’s delicious.

Like so many of those threatening Americans, and especially white Americans, for doing what America is supposed to let them do, the people intimidating Taylor object to the basic founding principles of American culture. One of them is that everyone here is free to borrow, adapt, improve and embroider whatever anyone else brings to the metaphorical smorgasbord. A Jew wrote “White Christmas” and “Easter Parade.” A white man wrote the story of “Porgy and Bess.”

The “cultural appropriation” police put all that at risk, and so do traitors to the American values we have fought hard for, traitors like Karen Taylor. Blogger Amy Alkon, who flagged this story, writes sympathetically, “It’s very hard to stand up to a mob when you’re afraid for your business and basically standing alone. So I understand why she and others apologize, but it’s really wrong that this is demanded of them, and I hope more people will tell the mob to fuck off.”

Well you know Amy, more people will tell the mob to fuck off if we stop making excuses for those who don’t. Keeping a democracy and a culture that protects human liberties is also hard, and citizens who don’t have the stomach for it undermine everyone’s freedom, including Asian Americans. Weenies like Taylor should be made just as afraid for her business when she sells out America, capitalism and innovation after anti-American, anti-white, anti-independence assholes like Nadia Kim, a professor of American Studies at Loyola Marymount University, make fatuous pronouncements like,

“…Congee has long been a dish for commoners that is often eaten in times of need because it requires only a few ingredients. By contrast, Breakfast Cure’s slow-cook meal packs cost $14.95 per pack… Taylor’s profiting off of congee, particularly as a white woman, erases the humble nature of the dish….She’s essentially making a large amount of money, or could potentially make a large amount of money, based on taking common people’s Asian food. She is claiming that congee is not good on its own, and she as a white woman has found a way to make congee much, much better, meaning that it serves a white people’s palate.”

What? Kim is talking nonsense, and racist nonsense. OK, she thinks Breakfast Cure’s version costs too much. Nobody’s making her buy it! Only particular races are allowed to profit by making a variety of Asian food? What country does she think she’s living in? She really teaches students with that brain? A white woman has as much right to profit by selling congee as anyone else: Kim is promoting racism, straight up.

Wait…if the price is too high for Breakfast Cure’s congee, how can Taylor make “a large amount of money”? See, if people like it and will pay for it, she has every right to make money. She’s not “taking” anyone’s food. By what bizarre definition of “taking” is selling a kind of food “taking” it? She also has every right to say that congee isn’t good on its own, and if she can make it taste better to a white person, a black person or anyone else, good for her.

It isn’t Breakfast Cure or “cultural appropriation” that Professor Kim and the others attacking the congee adaptation object to. It’s the United States of America, the “melting pot,” and individual rights.

Kathy Taylor is a watery-blooded American who just announced herself as their allies. She’s as dangerous as they are.

19 thoughts on “Cowardly, Culture-Betraying Grovel Of The Month: Karen Taylor Of Breakfast Cure”