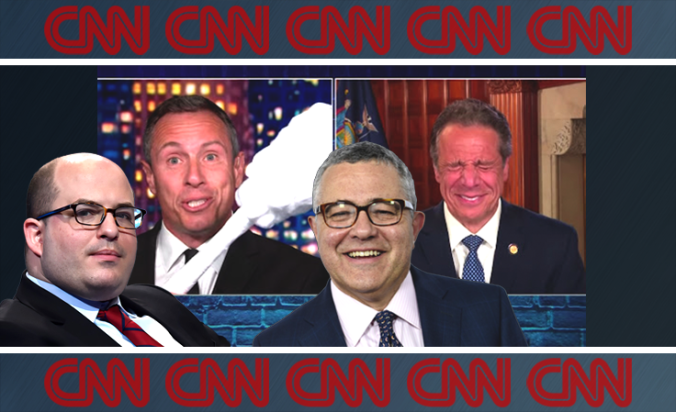 And it, meaning its unethical and unprofessional leadership, management and employees, was allowed to manipulate public opinion, national politics, and the nation. Think about that.

We didn’t need more to know CNN President Jeff Zucker was a slimy, ruthless hypocrite—his network was proof enough— but the unfolding scandal has certainly provided spectacular confirmation. You need to thoroughly update yourself at the links, but here are some basics:

Who knows what employees, or female or minority employees, were passed over so Zucker could advance his lover’s career? That’s a major reason why the boss having affairs with subordinates is always wrong, always destructive, and must be addressed.

The punishment does fit the crime.

That’s amazing: Stelter is even a bigger hack than I thought.

An outside observer might say, ‘Well, it looks like Chris Cuomo succeeded. He threatened Jeff. Jeff said we don’t negotiate with terrorists. And Chris blew the place up. How do we get past that perception that this is the bad guy winning?

Because Zucker is a worse guy, Jake. (What’s the matter with you?) Good guys don’t allow organizations they head to rely on unprofessional, untrustworthy, unethical characters like Cuomo, Don Lemon, Jeffrey Toobin, Stelter and Navarro. Good guys don’t build bad cultures, or news organizations that routinely lie. The metaphorical organizational fish really does rot from the head down. Your own statement shows that Zucker corrupted you.

In a typically no-holds-barred report/rant about the CNN meltdown, guilty pleasure Ace of Spade writes,

By the way, can NeverTrump drop the fainting couch act about Trump violating the precious norms of DC now? NeverTrump are mostly political/media operators living in DC and the media echo chamber who knew all this shit and chose to remain silent about it. They also probably all knew about the Cuomos’ love of using blackmail-type information to punish information.

And they’re fine with all that. But how they pretend to be scandalized by Trump’s connections to the National Enquirer. Oh, their virgin ears, their innocent eyes…!

Fuck you, you lying monsters.

10 thoughts on “The Jeff Zucker Scandal’s Emerging Details Confirm The Long-Time Ethics Alarms Verdict: This Is And Has Been A Corrupt, Untrustworthy News Organization”