A nearly completely lost week for me, ProEthics, its clients and Ethics Alarms mercifully comes to a close. One positive note: yesterday I spoke at the first live, face-to-face seminar I have participated in since March of 2020, though I had to do so while stuck in my Godfather impression. At least there was more audience interaction than with the far inferior Zoom versions of my presentations, but it was disheartening to be so worn out by a mere 75 minutes on my feet. Another good sign: nobody in the room wore a mask.

I also had an encouraging conversation with my cab driver, whose name is Duke; it was also my first cab ride in two years. He was an immigrant from Ghana, and launched into spontaneous an eloquent speech about how much he loved living in the U.S., “the greatest country in the world.” I gave him a 35% tip for cheering me up and giving me the boost of enthusiasm I needed to get through my program. Thanks, Duke. I needed that.

1. A Times opinion column today includes what should be an unnecessary headline: “It’s Possible to Learn the Right Thing From the Wrong Person.”

My initial reaction was that the op-ed is about four years late, and should have been plastered on the Times front page when the Left started pulling over statues and re-naming college dorms. Writer Margaret Renkl initiated her piece by referencing an ethics exemplar dear to my heart and that of Ethics Alarms: Sir Thomas More, who was simultaneously inspiring and brutal. She concludes,

But part of living comfortably in a complicated world means recognizing the complexity of human beings — their inscrutability, their ever-changing priorities, above all their capacity for self-contradiction. Much as we might prefer it to be otherwise, it is possible for a person to do unforgivable things and also things that are remarkably beautiful and good. We do human wisdom a great disservice when we expect it to be perfectly embodied in a flawed human being.

Perhaps even more important, we profoundly misunderstand the very nature of art when we think we know in advance what readers — or audience members or gallery visitors — will derive from it. Or, worse, when we presume to tell them what they should derive from it.

Whether it’s a painting or a film or a play or a dance or a poem or a novel or a sculpture or a symphony or any other artifact of creativity made by a restless, curious, questing human mind, a great work of art finds its completion in the restless, curious, questing mind of the person who encounters it. And there is no predicting how that act of transformation, that experience of utter intimacy, might unfold.

Great art of every kind allows people to place themselves, safely, into the larger world. It is transformative precisely because it is one way we come to understand our own part in the expansive, miraculous human story. A great work of art reminds us that our own lives, which too often feel small and insignificant, are part of a story that can be full of cruelty and suffering, yes, but that can also be astonishing. Very often it is magnificent.

When someone tells me that a book should no longer be read — or a film should no longer be screened or a painting hung or a play performed — because of some problematic history attached to the work or its creator, I think of the girl I was in 1980, discovering a truth I desperately needed to find, in just that moment, from a story that might or might not be true about a human being who might or might not be good. A human being who, I know now, was almost certainly both.

2. Appealing to her own authority, former “Blossom” star and part-time “Jeopardy” hostess Mayim Bialik (who also scored by playing Amy Farrah Fowler, Sheldon’s girlfriend and the female nerd on “Big Bang Theory”) begins an ad for “Neuriva” by telling us how smart she is.

You know, kind of like Donald Trump, or Fredo. My basic “rule of brain” is that if you feel the need to tell someone how brilliant you are, you’re not. But the actress’s hucksterism is worse than just narcissistic, it’s misleading. She claims,

Neuriva Plus is backed by strong science — yes, I checked it myself — and it combines two clinically tested ingredients that help support six key indicators of brain health.

Bialik holds a PhD in neuroscience, but there seems to be no evidence that she ever actually worked as one. The product she’s hyping has yet to be clinically tested with reliable rigor, according to one medical skeptic‘s investigation. Bialik is just doing what thousands of celebrities and actors have done since the dawn of hucksterism: accepted cash to hype a product that they never used nor have valid reasons to believe in.

2. Luckily, she made her remark after the Oscar votes were in. In an acceptance speech at the Critics Choice Awards last weekend, “The Power of the Dog” (Hated it.) director Jane Campion referenced tennis superstars Venus and Serena Williams and said, “You are such marvels. However, you do not play against the guys, like I have to.” Oopsie! Campion is white, the sisters are black, and her awkward comment was blasted from all over social media. Campion quickly groveled an apology the next day, but as we have seen, apologies don’t work. Campion has been hailed as a feminist icon, but now she is branded as a white feminist icon who claims superiority to black feminist icons. Many think she will be the Oscar-winner in the Best Director field, but now, if her name is announced, the response is likely to be muted. Do I think voter would have tended to vote against her had this incident occurred earlier? I do. In fact, I’m certain of it, though Campion’s directing achievement should be irrelevant to her foot being lodged in her mouth.

3. And speaking of women competing against the other sex, sort-of… 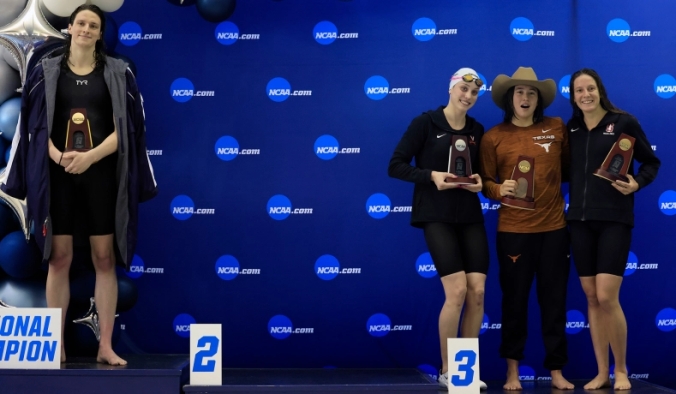 That’s Penn swimmer Lia Thomas on the left, after she won the women’s 500-yard freestyle championship on Thursday to become the first transgender NCAA champion in Division I history. Looks fair to me! (Thomas was booed by the crowd at the award ceremony.)