Well, it looks like this is going to be All-Race Wednesday. Sorry: I wanted it to be “Don’t Say Gay” Wednesday, but I don’t completely control these things. Incidentally, I know everyone is thoroughly sick of the Will Smith matter. However, the cultural implications of what should have been a meaningless blip are significant, and both this morning’s first post the comments to it are worth reading.

The last time I relied on the Washington Free Beacon, I was hoaxed by an inappropriate “satire” article that, was subsequent events have sadly proved, was too close to reality to signal that it was fake. So I checked this Free Beacon exposé on Georgetown Law Center, my disgraceful alma mater, particularly carefully, hoping it was a bad joke. It isn’t.

Ironically, just yesterday two old friends emailed me about whether I would be attending the class reunion next month, a major one. After reluctantly telling them that I could not, for the many reasons I have discussed here and here, most lately the Dean’s suspension of  professor Ilya Cohen for daring to suggest that limiting a Supreme Court nomination by race and gender was not the best way to ensure the most able jurist would replace Justice Breyer, I started having second thoughts. Was I just being an old poop, one of those alums who are bitter that things aren’t like the old days? Why not just accept it all and party with pals?

Then I saw the report. That graphic above is a slide from a First Year mandatory property course, one of many re-published by the Free Beacon. It reports in part,

Students in professor Madhavi Sunder’s mandatory first-year course learn on day one that the history of American property law is “the history of dispossession and appropriation,” according to videos of the course reviewed by the Washington Free Beacon. Lecture slides from the first month of coursework trace the “birth” of modern property law not to English courts, but to “Native dispossession and the enslavement of African Americans.” “Possession,” one slide asserts, “is a legal term of art for a settler capitalist society.”…These legacies of oppression “continue in contemporary doctrines” of property, Sunder said on the first day of class this semester. For example, her slides explain, “Intellectual Property has a cultural appropriation problem,” especially when it comes to black choreographers: Their dance moves were allegedly appropriated by the popular video game Fortnite, and by white influencers on TikTok. To help her students conceptualize the problem, Sunder quotes the “antiracist” author Ijeoma Oluo, who defines cultural appropriation as the “adoption or exploitation of another culture by a more dominant culture.” Students are then asked to apply this definition to intellectual property law… 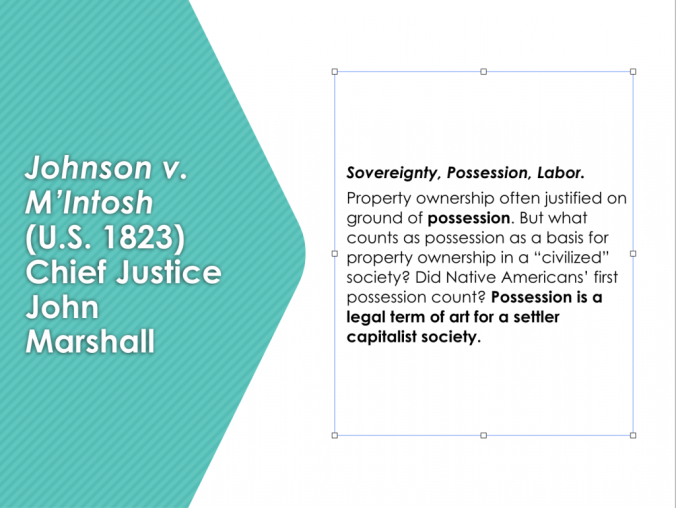 You can view them all here.

My alumni magazine was strategically mum about it, but apparently a sweeping CRT-based transformation of the law school curriculum is underway. Last Fall 2021, Georgetown Law’s faculty voted to adopt a new “institutional learning outcome”: All students will be expected to graduate with the “ability to think critically about the law’s claim to neutrality and its differential effects on subordinated groups, including those identified by race, gender, indigeneity, and class,” according to a faculty motion. These themes are “foundational knowledge” that “should be advanced throughout the entire first-year curriculum.” To that end, the motion directs administrators including the “Associate Dean for Equity and Inclusion”to “identify first-year professors” who already “advance the new institutional learning outcome” in their courses.

In addition to the required woke indoctrination contained in the first-year curriculum, students must also take an elective course that “has been certified” to “focus on the importance of questioning the law’s neutrality.” The certification process will “require a detailed examination of the course’s syllabus” by the associate dean for academic affairs, “in close consultation with the Associate Dean for Equity and Inclusion.”

This isn’t the description of a legal education. It is a commitment to ideological force-feeding, and part of the Left’s increasingly open effort to program rising generations to ensure the takeover of American institutions, government, and values.

I don’t know what I am going to do yet. I am tempted to organize an alumni protest, not that I have anything else to do.

I sure as Hell am not going to ally myself with the school by attending my reunion.