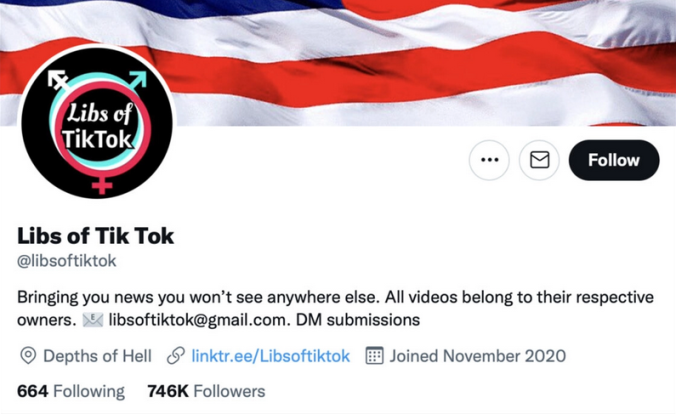 Let me begin by saying I hate this story. I hate it because it is, in part, web nerd inside baseball, and the answer to the retort, “Oh, who cares?” is hard to get out before the person asking has left to organize their sock drawer. Yet I have to write about it, not just because the conservative web is obsessed with it (that, and the fact that the mainstream media is ignoring it, thus branding the ugly mess as a “right wing story”—you know, a fantasy”) but because it explains just a bit more about how genuinely unscrupulous and ruthless the Warriors of Social Justice have become, at least to anyone who doesn’t know that already.

Ethics Alarms had posted a couple of the videos highlighted by the Twitter account Libs of TikTok, but I never focused on the account itself or its purpose, and because Twitter is an unethical platform that eats brains and censors opinions, I don’t hang out there. Ann Althouse is inexplicably fond of TikTok, which is a Chinese-owned social media platform on which members post videos. Now, thanks only to the current mess, I know that Libs of TikTok posts, often without comment, outrageous, crazy, hilarious or funny videos by radical progressives who are apparently unaware that their common sense, ethics alarms, and self-awareness have, in the immortal words of the Ghostbusters, “gone bye-bye.” This exposure holds the posters of these videos, as well as the ideologies that have rotted their brains, up for well-earned ridicule among the rational population. Progressives can’t stand that. The anonymous woman who posts as Libs of TikTok has also been a frequent guest of Tucker Carlson on Fox News, causing all Carlson-haters except critics like me to react to her mission like the hysterical lady from “The Birds”:

And so it was that the Washington Post—Nah, there’s no mainstream media bias!—assigned or allowed its tech reporter, Taylor Lorenz (formerly of the New York Times, which fired her as Ethics Alarms discussed here) to write and have published a furious attack on a humorous, if horrifying, Twitter account by a regular human being, even as you or I, because it regularly held ridiculous progressives up to well-deserved exposure and ridicule. An excerpt:

Libs of TikTok reposts a steady stream of TikTok videos and social media posts, primarily from LGBTQ+ people, often including incendiary framing designed to generate outrage. Videos shared from the account quickly find their way to the most influential names in right-wing media. The account has emerged as a powerful force on the Internet, shaping right-wing media, impacting anti-LGBTQ+ legislation and influencing millions by posting viral videos aimed at inciting outrage among the right.

The anonymous account’s impact is deep and far-reaching. Its content is amplified by high-profile media figures, politicians and right-wing influencers. Its tweets reach millions, with influence spreading far beyond its more than 648,000 Twitter followers. Libs of TikTok has become an agenda-setter in right-wing online discourse, and the content it surfaces shows a direct correlation with the recent push in legislation and rhetoric directly targeting the LGBTQ+ community.

Now, a responsible, ethical editor would stop reading right there and send the proposed article to the shredder. What is doing all of the dastardly things Lorenz is shouting “Fire!” about is not the account, but the deranged people who post the videos highlighted by the account. Libs of TikTok doesn’t call for action, or legislation, or anything but a smile or a slap to the head from those who watch what she found. Her posts seldom, at least the ones I’ve seen, include any commentary at all.

Then Lorenz “doxxed” the Twitter account’s creator, publishing her address after Lorenz traced her identity “through a complex online history.” Then the reporter appeared at her home to confirm the address. Doxxing is, as you probably know, an unethical method of online intimidation, especially since Left Wing mobs are prone to show up on the doorsteps screaming when someone allegedly does or says something they don’t like. Respectable news organizations don’t engage in the practice.

1. The Washington Post is not a respectable news organization. After criticism for the unethical report poured in, the Post issued this: 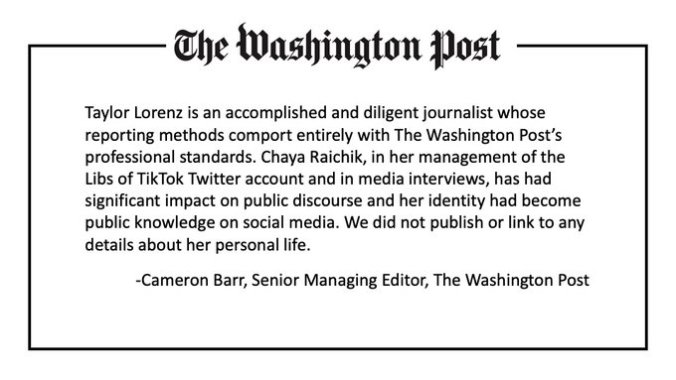 What a crock. First, this is self-anointing virtue: because the Post says Lorenz is a such a fine journalist, what she does must be “professional.” In this case, it wasn’t. Doxing a private citizen for the crime of exposing progressive wackos isn’t ethical journalism.  Moreover the last sentence is a lie. The original article  included a link to @libsoftiktok‘s private work details (her real estate license listing) and address. The Post later deleted them, but the damage was done. So the paper denied it did what it did anyway.

2. Lorenz is a hypocrite of epic proportions. Less than two weeks ago, Lorenz went on MSNBC—what does that tell you?–and claimed to have “severe PTSD” over online bullying and doxxing, which she claimed was based on sexism. Lorenz said she had endured a “smear campaign” that had “destroyed her life.”Lorenz’s track record made this lament ridiculous at the time, even before her latest hit job.

3. What Lorenz did was unequivocally unethical journalism. Glenn Greenwall, who was justifiably horrified, expressed the problem in a series of tweets of his own:

Fucking unbelievable: @TaylorLorenz, after sobbing on national TV 2 weeks ago, claiming she’s the victim of “harassment,” showed up at the house of the relatives of the citizen behind @libsoftiktok and badgered them, according to @libsoftiktok The bullies claim to be bullied.

Yes, liberals worship giant media corporations and think their resources shouldn’t be used against powerful institutions like the CIA or NSA or Pentagon but against private, anonymous citizens with bad politics. That’s what they think “journalism” is.

4. Incredibly, or maybe not so incredibly, many progressive journalists defended the Post and its reporter. Read this, for example. Imagine being so smug and obnoxious while rationalizing such unprofessional, malicious and unethical conduct. Better yet, consider how much hypocrisy can a commentator stuff into his head extolling unethical journalism by the same news media that buried Hunter Biden’s laptop story without having his head explode like an infected bubole…

I guess Lorenz (and WaPo) think this doxxing is acceptable — and good journalism — because the person is opposed to the left and giving visibility to its TikTok videos that might otherwise escape notice. There’s this implicit justification for doxxing:

The popularity of Libs of TikTok comes at a time when far-right communities across the Internet have begun doxing school officials and calling for their execution.

Some people on the right dox, so we — a prominent and elite newspaper — can dox a particular individual who isn’t accused of doxxing anyone but is popular with people on the right.  Libs of TikTok has been especially effective in showing teachers who are proud of teaching children about gender and sexuality. Is it nefarious to show their videos to people who think this teaching agenda is wrong? WaPo seems to be saying: Yes. But if the answer is yes, that means this teaching agenda can’t stand the light!

Here’s what I see as an attempt to wriggle out of that implicit admission that these sex-and-gender lessons must not be dragged out into the sunlight:

Members of the LGBTQ+ community who still attempt to use platforms like TikTok to educate people on gay or trans issues are subject to intense online abuse, causing a chilling effect.

“[Libs of TikTok] is playing on fears and misunderstandings of who trans people are, while amping up extreme rhetoric and normalizing portraying queer people as inherently dangerous to children,” [said Gillian Branstetter, a media strategist for the ACLU]. “It’s hard to stoke moral panic without main characters, and the role Libs of TikTok is playing is finding those characters.”

The more offensive the teaching is, the more the teachers will be abused if their work is exposed. Libs of TikTok is only drawing attention to material that has been posted on TikTok. So what is the standard for doxxing? I’d like to see WaPo state the answer to that question explicitly. Are they saying that those who highlight vile speech deserve to be stripped of their pseudonymity? Or are they saying — say it clearly, WaPo! — that when speech WaPo likes is exposed to people who don’t like that speech, it becomes acceptable to dox whoever exposed that speech?

Notice that WaPo poses as concerned about chilling the speech of the original TikTokker, but it is actively chilling the speech of those who draw attention to that speech. The original TikTokker chose to make something public, Libs of TikTok then shared that public speech, and WaPo publicized what had not been public, the identity of the pseudonymous sharer.

I challenge WaPo to explain its ethics in viewpoint neutral terms. I’m not saying there’s much chance that its ethics are viewpoint neutral. I just want to see it take the problem seriously and either try to demonstrate the neutrality of its ethics or, alternatively, defend its non-neutrality forthrightly. I’d like to know the rule that it purports to follow, because I want to be able to use it in the future.

5. This is a shining example of the progressive establishment’s desperate effort to reject res ipsa loquitur––the apotheosis of the epidemic “It isn’t what it is” tactic in the face of progresivism’s own obvious failure. It’s somehow wrong to re-post the actual statements and speech of the Left’s most extreme advocates, because such communications reveal too much—like the truth, and the public can’t handle the truth. Here’s

The account “Libs of TikTok” is a treasure trove of content that gathers and posts bizarre videos from radical leftists and protected groups that fall under their intersectional umbrella. They don’t edit it in any way, they just rip and post. The most they add is a little blurb for the tweet.

They don’t need to add anything, anyway. The content speaks for itself…

It shouldn’t be a surprise that the left is horrified by its own ideas being exposed to the world in such a way, and so it set out to shoot the messenger. Twitter suspended it for no legitimate reason, leading many to surmise that the real reason was that it was effective at helping the left expose themselves.

6. The episode also stands as a vivid example of how the operative ethics standard on the Left now is “the ends justify the means.” Journalists know doxxing is unethical, but at this point, they don’t care. Anything to keep the public from figuring things out.

7…which is what makes this all so stupid as well as unethical. More people have learned about Libs of TikTok from Lorenz’s attack and the response to it than ever would have without the controversy. It’s the Streisand Effect. Now The Babylon Bee has offered the doxxed proprietor a full time job with the conservative satire site.