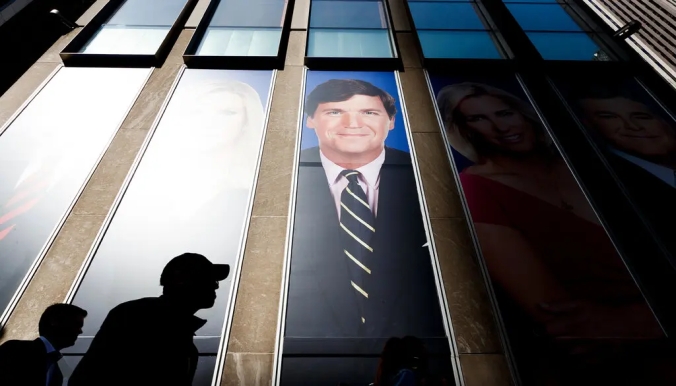 So many things jump to mind as Ethics Alarms considers the astounding front page attack on Fox New pundit Tucker Carlson in today’s Sunday Times, preceded by the article’s online release yesterday, first among them being “Stop making me defend Tucker Carlson!” Tucker Carlson is an unethical, dishonest, ambitious and cynical pundit whose sincerity and and integrity are ephemeral at best. I learned this long ago when he was still wearing bow ties to signal his conservatism, engaged in such activities as falling asleep on “Fox and Friends” and seeding his conservative news and commentary website The Daily Caller with soft porn to goose traffic. I won’t watch Carlson’s show unless I have to for Ethics Alarms purposes, and then only via videos.

Carlson has increasingly become a demagogue as his ratings have soared. Yet Ethics Alarms has condemned the efforts by progressives (you know: anti-free speech advocates) to bring him down and end his ability to counter the 95%-5% mainstream media pro-Left bias by employing boycotts of his sponsors. I am confident that Tucker, like Bill O’Reilly, Keith Olberman, Melissa Harris Perry, Dan Rather, Glenn Beck and other ethically inert media supernovas will eventually be exposed, disgraced, or self-destruct in an overload of narcissism and arrogance. It is almost inevitable.

Nevertheless, the unrestrained Times piece is the Dean Scream of progressive mainstream media fury over the fact that it no longer can control what Americans know and think. It is headlined in the print edition “American Nationalist,” which the Times appears to assume its readers will respond to as they would to “American Nazi.” Nationalism is commonly defined (by sources that are not politically committed to making the definition repugnant) as promoting the interests of one’s nation  and the goal of maintaining that nation’s culture, independence and sovereignty. The Horror. The fact that the Times is so certain that being identified as a nationalist is so damning might be more significant than the attack itself.

The sub-head is “How Tucker Carlson Stoked White Fear to Conquer Cable.” The article takes up 25% of the Times Sunday front page, then continues inside the A Section for six—-SIX!—more full pages. This is the first time since the Russian invasion of Ukraine that the Times has devoted more ink to any news event but the invasion. There were only a couple of editions during the peak of the Times panic-mongering over the Wuhan virus that its pandemic coverage was so massive. Yes, Tucker Carlson is thought to be as dangerous and sinister by the flagship Democratic Party propaganda organ as a world-wide plague , or a deadly unprovoked invasion.

But wait, there’s more! As insanely excessive as today’s assault is, it is only Part 1! There is also a Part 2 and a Part 3,  which the Times will roll out in its print edition starting tomorrow.

Here is the tenor and substance of Part I in this section of an early paragraph:

…Mr. Carlson has constructed what may be the most racist show in the history of cable news — and also, by some measures, the most successful. Though he frequently declares himself an enemy of prejudice — “We don’t judge them by group, and we don’t judge them on their race,” Mr. Carlson explained to an interviewer a few weeks before accusing impoverished immigrants of making America dirty — his show teaches loathing and fear. Night after night, hour by hour, Mr. Carlson warns his viewers that they inhabit a civilization under siege — by violent Black Lives Matter protesters in American cities, by diseased migrants from south of the border, by refugees importing alien cultures, and by tech companies and cultural elites who will silence them, or label them racist, if they complain.

The Times states these issues, which Carlson does often focus upon, as if they are the fever dreams of a madman. In fact and in truth, the United States culture and values—“civilization” if you prefer—are under siege: most of the news media sees its role as denying and dismissing that reality until the siege has succeeded. Black Lives Matter rioters (not just protesters) have intimidated American cities with threats of violence and actual violence. Illegal aliens (the current cover-word being used as “disinformation” is “migrants”) from south of the border are a health hazard, but more crucially an assault on the rule of law and American sovereignty);  refugees importing alien cultures are a problem worthy of alarm ever since the process of assimilation began being undermined and attacked during the Carter administration, and tech companies, universities, social media, and other institutions–you know, “elites”?— are attempting to silence opposing voices or label them racist.

Talk about lack of self-awareness! The Times tars Carlson as racist even while mocking his contention that the progressive forces the Times is allied with responds to criticism by labeling dissenters as racists. Wow.

Here’s another of the many mixed blessings of writing ethics alarms: the claim that Carlson’s show could be “the most racist show in the history of cable news” is so outrageous that I would quit reading and use the paper to wrap Spuds’ morning ablutions if Ethics Alarms didn’t beckon. Carlson’s rhetoric has occasionally smacked of racism, or at least bigotry, as in the episode I wrote about in March.

However, Carlson doesn’t even run the most racist show on cable right now, much less in “the history of cable.” CNN and MSNBC are teeming with anti-white racism that is so malign and intentional that the regular outbursts by Don Lemons, Joy Reid, and others can’t be excused as mistakes or gaffes. They are routine and unapologetic. They just don’t count because the slurs are directed at whites.

The Part I hit job is filled with slimey advocacy masquerading as reporting. There are a lot of graphs and charts, with slanted and intellectually dishonest analysis. A chart showing that Carlson’s opening monologues—a bit he lifted from previous Fox News Bloviating Champ Bill O’Reilly, but Carlson is better at it—have grown longer is supposed to demonstrate that his show is an “echo chamber.” It highlights Tucker’s longest opening statement, which was “railing” against “The Black Lives Matter protest movement.” Racist! Except that we now know the “movement” is a racist, Marxist scam that has cost billions, killed many, and further divided the nation. Carlson deserves credit for figuring this out so quickly. It should have been the longest monologue. Good for him.

Moreover, the fact that the opening statements are longer than they were when he started reflects the fact that 1) he’s gotten better at them  2) his audience likes them, and 3) they stir up controversy. Rush Limbaugh’s show was nothing but a monologue. So what? And perhaps it is unkind to mention it, but when a Times chart purports to show that Carlson’s “monologues have grown longer yet the longest was two years ago (and second and third place more than a year ago), a verdict of confirmation bias is warranted.

Even more dishonest is the “echo chamber chart” showing that fewer and fewer guests on Tucker’s show disagree with him. This is because Carlson is a better debater than any TV pundit, for the first three years of the show, he made progressive guests look foolish. These were popular and triumphant moments for Carlson that built the viewership, and the word went out that challenging him on the air was too risky. Does the Times seriously think Tucker or his producers are at fault for Jen Psaki, or Adam Schiff, or Hillary Clinton, or Nikole Hannah-Jones, or Dean Baquet, or Paul Krugman not being guests on the show?

Well, I read it so you don’t have to, but go ahead if your sock drawer is in order.

A few of those other thoughts that went through my mind…