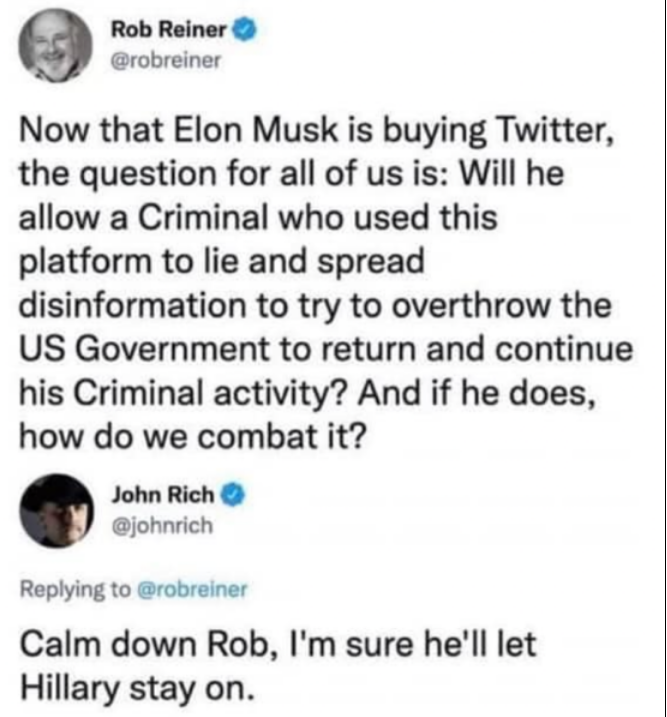 1. What happened to Rob Reiner? How did he get that way? I’ve asked my wife to swear that if I ever start writing or saying things this stupid and ignorant, she will hit me over the head with a brick.

2. Declaring Trump a criminal is on the cusp of libel, and capitalizing “criminal” is unethically illiterate for someone with so many followers.

3. The tweet deceitfully implies that using the platform to spread misinformation is unique to Donald Trump. What is significant is that virtually only conservatives and Republicans (and the Babylon Bee) get punished it. Chris Cuomo, to name one of many examples from the news media, tweeted that “hate speech” wasn’t protected by the Bill of Rights, and that it would be illegal for anyone but journalists to read Wikileaks leaks of classified documents. He’s a lawyer (how did THAT happen?), and the public assumes he knows what he’s talking about.

4. Nothing Trump tweeted ever threatened to overthrow the government by any definition: Reiner’s tweet is disinformation!

5. Nothing Trump ever tweeted was “Criminal activity” either. Also disinformation, and yet on Twitter Carl’s deranged son remains.

6. It is clear from Reiner’s tweet that he believes that political opponents’ criticism of his party and political allies should be stifled and blocked if possible. That marks him as hostile to democracy…like increasing numbers of Americans and politicians of his political persuasion.