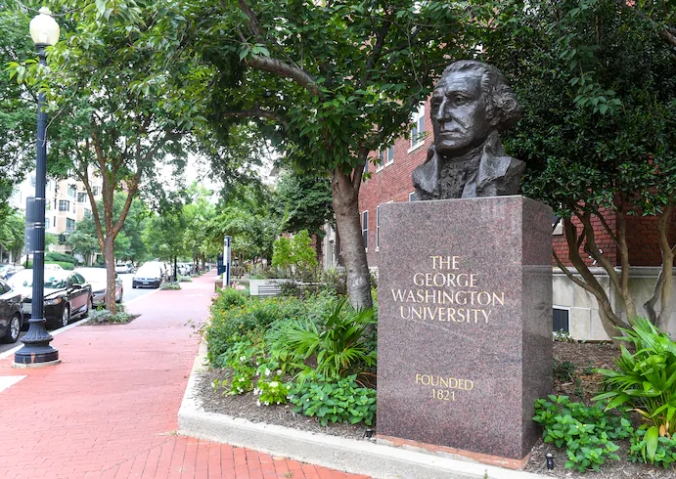 A black college senior named Caleb Francois who is currently attending George Washington University in Washington, D.C. persuaded the Washington Post to publish his op-ed of surpassing ignorance and stupidity. His thesis (or theses)?

The racist visions of James Madison, Winston Churchill and others are glorified through building names, programs, statues and libraries that honor their memory.

The controversial Winston Churchill Library must go. The university’s contentious colonial moniker must go. Even the university’s name, mascot and motto — “Hail Thee George Washington”— must be replaced. The hypocrisy of GW in not addressing these issues is an example of how Black voices and Black grievances go ignored and highlights the importance of strong Black leadership.

The Post is being roasted in various conservative forums for publishing the 800-word essay.  One pundit (at Breitbart) writes,

The arrogance of the Post knows no bounds. Publishing this editorial is just another troll from the Post, a way for the Post to stick its finger in the eye of its critics by relishing the hypocritical double standards the former newspaper now lives by.

I hate to defend the Post, but I don’t think for a second that the paper finds the student’s argument persuasive. It’s just provocative, and like other off-the-wall opinion pieces published by both the Post and The New York Times (remember the op-ed recommending that children and babies get to vote?), publication doesn’t imply endorsement. Yet the author in this case isn’t a historian or a crackpot professor; it’s a maleducated, indoctrinated young black man imbued with the 20-something’s unique certitude that he has everything figured out. If Caleb learns anything after graduation, I think it is very likely that he will want change his name and keep a bag over his head. Should a national newspaper help a young man to make a fool of himself?

Predictably, even the Post’s progressive readership entered an overwhelmingly negative verdict on the piece (which the author will surely dismiss as more racism and white supremacy.) Here is the “most liked” and the most representative of the over 1200 comments:

History professor here. If GW was only known for being a Confederate General or a slave owner, cancel away and rename away. But he was not. He is known for so much more… one of the biggest things is the idea that a president is not a king. And the office is not for life. Without him, our country would not be free. He kept order at a time when fractions would have torn us asunder. For God’s sake, do not rename George Washington University… I’m a liberal, and I believe in equality for all. But this is just stupid.

Stupid indeed. But isn’t the op-ed also illuminating? Doesn’t it reveal how black American youth have been alienated from their own nation’s history by toxic indoctrination? Does it not show how miserably inadequate our public school education is, especially in history?

And thus your Ethics Alarms Ethics Quiz of the Day is…

Was it ethical for the Washington Post to publish “George Washington University needs a new name“?