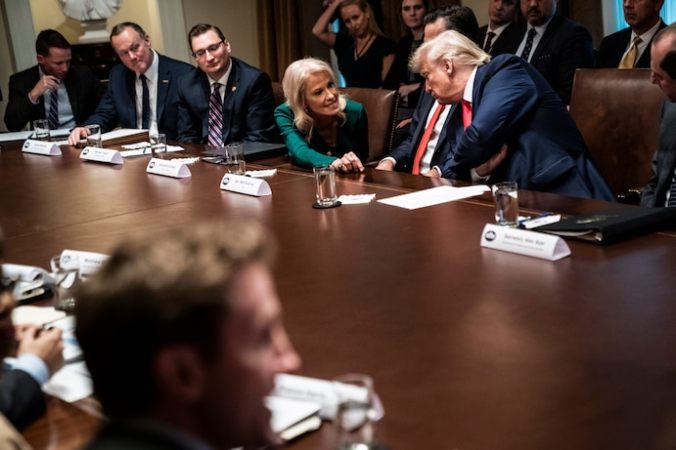 In this recent post, Item #4, I pronounced “Here’s the Deal,” former Trump campaign manager, PR flack and advisor KellyAnne Conway’s 500 page memoir of her White House days, an unethical betrayal of trust and professional ethics. According to the Washington Post,, Conway’s “tell-all” doesn’t do her former boss dirt, just other co-workers, like Jared Kushner and Anthony Fauci.

This post is to make a clarification: It doesn’t matter. Conway is still cashing in, and her book is still unethical. Workplaces do not work without mutual trust, and that means that no one can be candid, honest and spontaneous while thinking that what they do or say might be made public by an undeclared spy, mole, or blabber-mouth. Those like Conway who write books and get them out before the main characters have retired, died or faded from memory damage the workplace, politics, government, and human relations. They are ethics corrupters. They are selfish, destructive, betrayers. All of them. It doesn’t matter whether their fame arose from politics, Hollywood, the business world, journalism or someplace else. Such authors betray the trust of others for their own gain, unless every single individual mentioned by name for what they said or did has given advance consent.

As for Trump, here is an example noted by the Post in which Conway is not intending to denigrate her former boss:

In the waning days of his presidency, Conway also writes that, during a discussion with Trump on pardons and clemency, he turned to her and asked, “Do you want one?”

“Do you know something I don’t?” Kellyanne asked Trump, she writes. “Why would I need a pardon?”

“Because they go after everyone, honey. It doesn’t matter,” Trump replied, according the book.

“I politely declined,” she concludes.

That conversation was still confidential. Trump did not expect it to be made public. There are many ways the episode could be seen as reflecting negatively on the President, including his calling a 40+ year-old professional woman “honey.” If she did not specifically get his permission to relate that exchange, it was unethical to put it in the book.