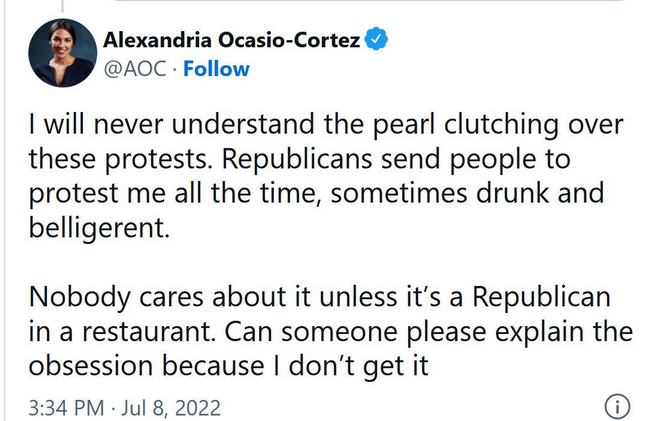 Eschewing, for the nonce, a detailed explication about how long the list is of things AOC doesn’t “get,” this tweet was issued just a few days when an obnoxious comedian and right wing troll named Alex Stein ambushed the perpetually clueless socialist Congresswoman as she was going up the steps of the Capitol, gleefully calling out that she was his favorite “big booty Latina” and saying that even though she wants to “kill babies,” she looked “sexy” in her dress. AOC reacted thusly to his camera operator, and Stein later posted the episode on his YouTube channel.

Of course, Stein’s conduct was disgusting, and his treatment of the Congresswoman qualifies as sexual harassment in form and substance despite being legal. I also qualifies as a protest. But Ocasio-Cortez was not amused, tweeting in succession…

There is no evidence from the video that she was “walking over to deck him,” but never mind: what’s telling is repeat observations that “no one will protect us” from public expressions of dislike and disagreement, and that it’s regrettable that “the institution” allows the peasants to annoy their betters.

Note the obvious distinction between the Kavanaugh harassment that AOC shrugs off, and the catcalling “comedian.” Kavanaugh is a SCOTUS justice, and not properly influenced by public opinion, so the targeting of him was based on a Court opinion was nothing more than angry vengeance. AOC is a Congresswoman who represents the public, and protests aimed at her are exactly what the Founders had in mind. Kavanaugh was not engaged in his official employment while dining at a restaurant; AOC was on the job. Kavanaugh was on private property; AOC was on the steps of the Capitol. Other people were negatively affected by the mob harassing Kavanaugh. AOC alone was the target of Stein.

Yet the New York rep declares that she doesn’t believe annoying protests like Stein’s should be permitted. Why? Obviously it is because a good politician—her—is the target. Bad people like Kavanaugh deserve to be harassed, so it’s OK.

In fact, both the harassment of Kavanaugh and the cat-calling mockery of AOC were unethical. Stein’s act was definitely protected speech; the verbal assault outside the restaurant is a closer call.

Earlier, Pete Buttigieg displayed his embrace of the same double standard, but less directly, as he was engaging in his specialty, double talk. He was asked to defend his husband’s tweet mocking Kavanaugh’s experience, which was…

Yeah, good one, Chasten. None of those dining decisions included killing anyone, so your implied analogy is flawed.

But I digress. The DOT Secretary replied,

“Look, when public officials go into public life, we should expect two things. One, that you should always be free from violence, harassment, and intimidation. And two, you’re never going to be free from criticism or peaceful protest, people exercising their First Amendment rights.”

ShutDownDC, the activists targeting the five Justices who voted to overturn Roe, is offering up to $250 for every sighting of the justices that allows the group to track them down and harass them, just like they did Kavanaugh when he went to Morton’s Steak House. Before the Dobbs opinion ever came down, Senate Majority Leader Chuck Schumer publicly warned Kavanaugh, saying, “I want to tell you Kavanaugh. You have released the whirlwind and you will pay the price. You won’t know what hit you if you go forward with these awful decisions.”

That was a not even thinly-veiled invitation for the progressive mob to engage  harassment and intimidation, and that’s what the mobs outside the justices’ homes and Morton’s engaged in. Other progressives have directly called for intimidation and harassment. Harvard clinical instructor Alejandra Caraballo argued that “The 6 justices who overturned Roe should never know peace again.”  Caraballo  called for people to “accost them every time they are in public” as the “civic duty” of every American.

The Democratic Party is devolving into one that only believes in free speech that benefits its interests. Fairness and decency are increasingly regarded as impediments to its agenda.