Nice! There has been a recent outbreak of further uncivil, undignified speech and communication from members of Congress, who are, unfortunately role models and set help societal standards. The recent outburst have come from Democrats, though the phenomenon is not limited to that more rapidly rotting party….on the other hand, no Republican House member has yet said, in reference to President Biden, “Let’s impeach the motherfucker!” as Rep. Rashida Tlaib  did regarding President Trump. On the other hand, two Republican House members, Bill Posey and Jeff Duncan, evoked “Let’s go Brandon!” during House, which is the equivalent of  “Fuck Joe Biden.”

Chuy Garcia’s tweet is special, though. The Cook County House rep’s deep dive into vulgarity against  a random critic on Twitter was in print (though he deleted it eventually) and was unethical, unprofessional and unseemly in many ways. “Retarded,” of course, is a banned word in Progressive World. “Dipshit” is not acceptable discourse by an elected official, nor is “fucking” and its variations, though Rep. Talaib would doubtless argue that the normal rules don’t apply when the target is Donald Trump, just like “journalists” now argue that his existence justifies their routinely—but righteous!—biased and misleading reporting.

The tweet by Garcia is also hypocritical, since once upon a time he tweeted this: 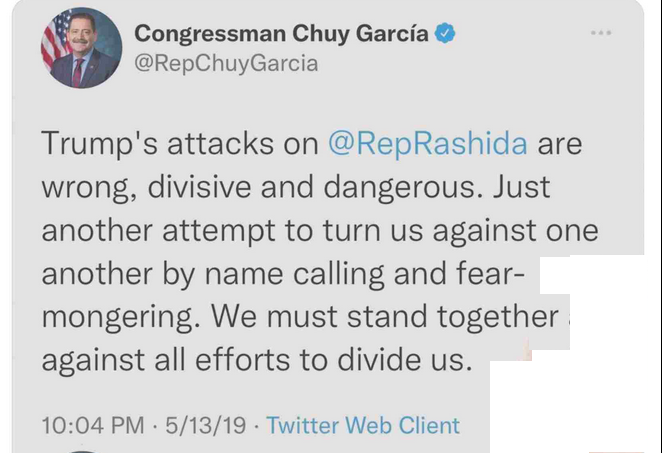 In fact, it’s doubly hypocritical, since the same House member he is defending with a paean to civility was the source of “impeach the motherfucker.”

I do hold Trump at least partially responsible for the incivility of creeps like Tlaib and Garcia. The referenced 2015 post, “A Nation of Assholes” and its many follow-ups held that having an incorrigible vulgarian and name-caller like Trump in the White House would inevitably cause societal civility to deteriorate.

This deterioration happened and is progressing still, though not every politician has succumbed, and those that have are signalling their own unfitness for high office.

I should also provide an update to another example that I mentioned yesterday in the bleak isolation that is this blog’s traffic on Saturdays. In Item #6, I wrote,

The Congressional Baseball Game is an annual contest for charity that pits Democratic and Republican members of Congress against each other. It was first played in 1909, and has symbolized Congressional comity, civility, and professional respect. The fact that the game this year supported the Boys and Girls Club of DC., Rep. Linda Sanchez (D-Cal) couldn’t restrain herself from giving a middle finger to the Republicans. Late yesterday, she claimed that she was responding to “sexist” comments. Even if that is true (and who knows?) her conduct was, as Will Smith would say, “unacceptable” for a high elected official in public….

First, Sanchez implied that she received the rude comments from the Republican dugout. “The Congressional Baseball Game is one of my favorite events of the year. It’s a great cause and brings both sides of the aisle together for a night off from partisan politics,” Sanchez told reporters. “That is why it really struck a nerve when I heard an offensive and misogynistic comment from the Republican side on my way back to the dugout. In the heat of the moment, I reacted. I have no tolerance for men who make women feel like they are unimportant or don’t belong – especially on the field,” she continued. “I will always stand against that kind of bigotry.”

Impugning Republicans and grandstanding too! But that’s Linda! Unfortunately for her, there was a reliable witness, Corey Inganamort, the mascot coordinator for the Washington Nationals. He tweeted,

“I was in the dugout with the Republicans last night. She is lying. Nothing offensive or misogynistic was said by anybody. In fact, everybody was shocked by what [Rep. Sanchez] did.”

Caught red-fingered, Sanchez promptly changed her story. “It wasn’t the team,” Sanchez told NBC News’ Frank Thorp “It was an obnoxious fan who shouts misogynistic shit at me every single year. I’m not going to dignify it with a response because it’s nasty and it’s crude, and it has no place at a charity baseball game.”

Unlike, say, a raised middle finger. But why did she initially say that the insults came from her GOP colleagues? [Answer below!]

If the Republican women would have stood up and said that’s not acceptable instead of, you know, trashing me for my response then we might have a place where there’s no misogyny that’s tolerated by anybody anywhere.

Ah! Republicans pounced, and Republican women made her make an obscene gesture!

Now back to Garcia: he has, predictably, blamed his staff for the “dipshit” tweet. Even if it wasn’t him tweeting like 7th Grade jerk, he hired someone who thought that was an appropriate way to address citizens on Twitter, and elected officials who allow others to speak for them under their signatures are dishonest, irresponsible and untrustworthy.

A Congress of Assholes.

8 thoughts on ““A Nation Of Assholes,” Congressional Division”