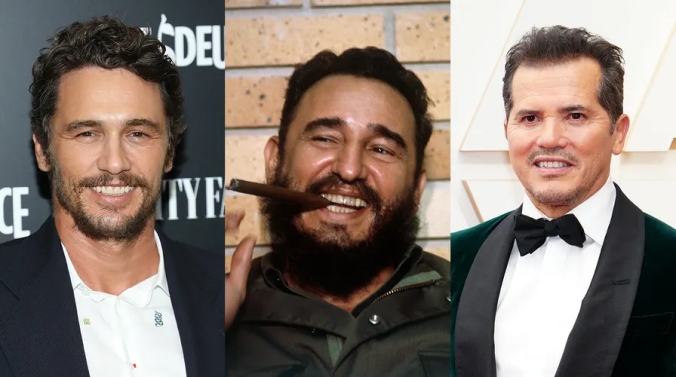 More than a decade ago, while I was the artistic director for a Northern Virginia professional theater I had co-founded, I offered the greater D.C. theater association a draft ethics code that I had developed after I realizes that the ethics alarms of the typical area theater professional were approximately the same as those of the average drug cartel boss. The response was telling: I received a formal thank-you, but was told that the theater community had no interest in ethics, and had done just fine without any code.

This attitude is not unique to Washington D.C. and environs, or regional theater. Performance artists generally and across all levels and regions tend to be incompetent at ethical analysis, and their ethics alarms aren’t merely dysfunctional, they are warped.

From the world of professional performing, for example, we have this controversy, arising from the announcement that actor James Franco (far left), a Portugese-Swedish-Jewish American, has been cast as Fidel Castro in a film project, and celebrated Hispanic actor John Lequizamo (on the right) was outraged over the casting choice.  “How is this still going on? How is Hollywood excluding us but stealing our narratives as well?” Leguizamo wrote. “No more appropriation Hollywood and streamers! Boycott! This F’d up! Plus seriously difficult story to tell without aggrandizement which would b wrong!”

As you can see, the actor was so upset that he lost the ability to communicate in coherent English.

But then, he’s an idiot. Is Leguizamo’s position that the only roles Portugese-Swedish-Jewish performers can play are Portugese-Swedish-Jews? That would be rather career-restricting, I would think. Leguizamo is from Colombia. Does he think he could play Castro? He’s not Cuban. What standard is he proposing, exactly? Kant holds that one’s ethical rules must apply universally, or they are invalid. Leguizamo is still ranting on this topic, and making less sense as he goes on. About an hour ago, he tweeted,

Latin exclusion in Hollywood is real! Don’t get it twisted! Long long history of it! & appropriation of our stories even longer! Why can’t Latinxers play Latin roles? Why can’t we play lead roles? Why can’t we they flip white roles to Latinx? We r the most excluded group in Amrca

Quick, someone tell John that Ana de Armas,a Cuban-American actress, is playing Marilyn Monroe in a much-ballyhooed Netflix series. Did he see Spielberg’s flop “West Side Story,” or doesn’t that count because the puerto Rican roles weren’t played exclusively by Puerto Ricans, but by “Latinxers”? No nationality has a monopoly on “their stories”: what would you call “Hamilton,” John? Everyone celebrated a cast entirely “of color” singing the story of the Founders, just about the whitest bunch one could imagine. If a white man complained that the show appropriated “our story,” I presume that you would call him a racist, which would be fair.

Oh! I get what you’re saying! The fair standard is that white Anglo-Saxon actors and Portugese-Swedish-Jews should only be allowed to play their exact genetic and ethnic twins, but “Latinx” performers, coincidentally like you, should be able to play any races, ethnicities–any role at all. All stories are fair game for “Latinx” actors, but Hispanic culture-connected stories are off limits anyone not born with some Spanish DNA in their cells. Right? Sure, that’s fair! That’s “equity”!

Sadly, this is the typical level of ethical, logical and critical thinking throughout the performing arts.