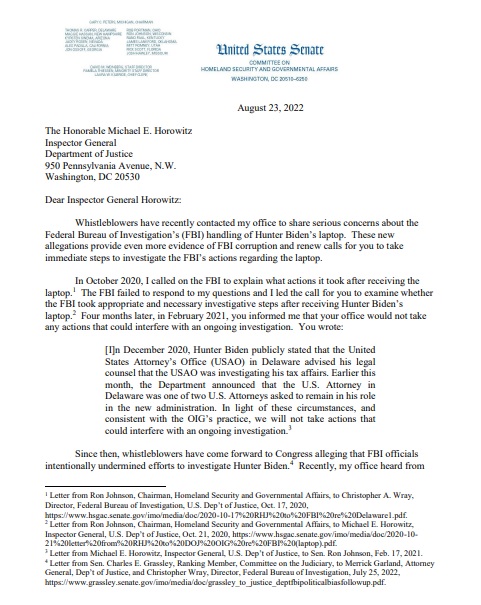 I still see it almost every day: a reference to Donald Trump’s stolen election “lie.” Trump, as is his wont, makes this slur too easy by his usual sloppiness of expression. First, he employs the language of certainty to express a belief that cannot be verified, and second, he keep focusing on voter fraud. However, as Ethics Alarms had indicated on many days in in many ways, there is a substantial likelihood that Trump’s second term was stolen from him (and the nation), not by fraud but by the continuous series of deliberate and unethical acts of sabotage committed against his Presidency, administration and campaign by Democrats, progressives, the news media, social media, popular culture, Big Tech, NeverTrump Republicans and the “Deep State.” (As an aside, the denials by the Left that the Deep State exists remind me of the once commonplace denials by Italian-Americans that the Mafia existed.)

This week, two bits of evidence supporting this position emerged:

1. Senator Ron Johnson (R-Wisc.) has heard from a whistleblower who claims that FBI officials told investigators not to look into Hunter Biden’s laptop before the 2020 presidential election, because the agency didn’t want “to change the outcome of the election again.”

“These new allegations provide even more evidence of FBI corruption and renew calls for you to take immediate steps to investigate the FBI’s actions regarding the laptop,” the senator wrote in a letter to Justice Department Inspector General Michael Horowitz this week. [You can read the whole letter here.]

2. Nate Silver, the 538 stat-head who is hardly a Trump supporters or even without lacking for progressive/Democrat biases, revealed yesterday in a series of tweets that there is evidence of “liberal public health elites” pressuring Pfizer to “change its original protocols” and delay it’s Wuhan virus vaccine approval, which “had the convenient side-effect of delaying any vaccine announcement until after the election.”:

Also, the late 2020 push from liberal public health elites that persuaded Pfizer to *change* its original protocols – and had the convenient side-effect of delaying any vaccine announcement until after the election – deserves more scrutiny…I don’t know for sure but yes the implication is that it may have been politically motivated in whole or in part. Especially given the people making the push, who tend to be strong D partisans. It’s a story that deserves more reporting and I’ve done some poking around myself.

“A bit more scrutiny” is an understatement. The news media has precluded any scrutiny of the ways Trump was denied a fair election, in part because the media was a large part of the effort to defeat him by misleading the public and keeping information that might hurt the chances of Joe Biden “from”in darkness,” as the Washington Post would say.

Or as Bill Clinton would say, whether or not the 2020 election was stolen depends on what the meaning of “stolen” is…

12 thoughts on “Breaking News On The Stolen Election “Lie””