The new, non-traditionally cast, “diversity”-pandering revival of “1776” is about to open on Broadway. Ethics Alarms already discussed it here: the production seems like a cynical, misguided, truly terrible idea that is likely to crash and burn, but as I wrote last month, “I hope the result is brilliant and illuminating.” I also wrote, “What I see, however, is a cynical abortion of a classic musical motivated by arrogance, ignorance, and greed.” In other words, the thing has a lot of self-inflicted problems standing in the way of critical and financial success, nicely symbolized by the photo above of an Asian-American woman playing slaveholding Continental Congress member Edward Rutledge singing “Molasses to Rum to Slaves” in the musical’s most dramatic scene. As a stage director and American history fanatic, I don’t see how having that song performed by someone who can’t evoke Rutledge in any way does anything but undermine the best song in the show. But hey, you never know.

One thing the radical production doesn’t need, however, is for that same performer to trash the production publicly. Here is “Rutledge,” Sara Porkalob, in an interview with Vulture’s Jason P. Frank:

“To me, the play is a relic. It is a dusty, old thing… On the inside, I’m cringing… I’m like, It’s okay. I wouldn’t have wanted it this way, but I am doing my job….[The direction] is horrible. I hate it… What I want to do with my time is make new works with collaborators…I feel like I’m going to work.”

Asked what she hopes to get out of being in “1776,”  Porkalob replies: “A Tony nomination, good reviews, and a smart, personable, hard-working agency that’s ready to rep me. Also, I guess more Instagram followers and more community here in New York. I don’t want just a career. I could make a career just being in commercial Broadway musicals….But I don’t want that to be my life.”

“At the end of the day, if I’m compromising my desire to do my own work, but the resources are there, it really just comes down to labor. If I’m compromising, I’d better be getting paid a lot more money, honey. I have to ask, ‘Do I want to give 100 percent of myself to this?’…No! They’re gonna get 75%, but that 75% will be great.”

Wow. She’s not only an ethics dunce, she’s a pathological narcissist and an asshole.

Performers like this—although I’ve personally never encountered one this extreme—are poison to a production. I would fire her for the last comment alone, even without the rest. She’s not being paid enough to do her best? Bye! And never bother to audition for me again. That statement should haunt her for the rest of her career, which, if there is any justice in the universe, will be nasty, brutish, and short. I expect performance artists to extend themselves if they are being paid nothing at all. My best work as a director has been pro bono.

Criticizing one’s own production, however, is also ample justification for firing for cause even without the “I’m just phoning it in but it’s good enough” comment; indeed, I believe that dismissal is mandatory. Porkalub’s statements betray her fellow cast members, the directors and the backers: it is part of her job to help sell tickets, not to broadcast negative publicity.

In the ensuing controversy over this toxic jerk’s remarks, @New York Theater ran a reader poll: 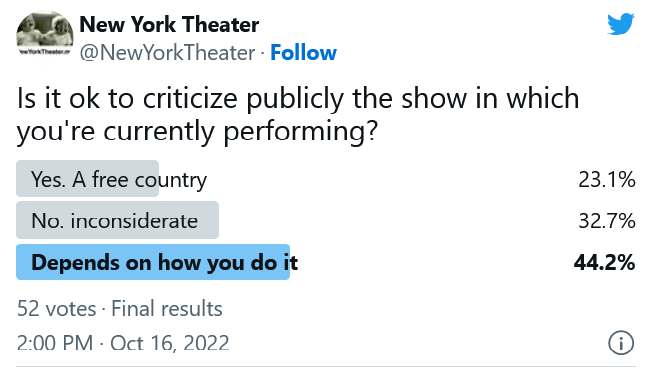 The main takeaway from these results is how few people have ever run an organization, mounted a theatrical production, have a clue about team-building, or could identify unethical conduct if it flew up their nose. Sure, she’s free to betray her colleagues and sabotage her own project: that doesn’t mean it’s excusable to do it. Morons. Her comments are a whole lot more than “inconsiderate”—they are divisive, destructive, unprofessional and a betrayal of trust. As for “Depends how you do it”—there is no way to attack a production you are part of in public and denigrate the directors that isn’t unethical and unforgivable.

The day after the interview came out, a co-director of “1776,” Jeffrey Page, posted  on his Facebook page:

Dear nameless person, I know that you feel good about that thing you said…I didn’t feel good about it. I know you feel like it is now your time in the sun. You ain’t put in the time and you ain’t done the work. You are ungrateful and unwise. You claim that you want to dismantle white supremacist ideology…I think that you are the very example of the thing that you claim to be most interested in dismantling.  You are fake-woke, rotten to the core, and stuck in the matrix; I hope that you get that increased IG following that you so desperately thirst.

Gee, that was inarticulate and juvenile—but that’s show biz! Getting in a public pissing match with your cast is also unprofessional, not to mention stupid and counter-productive. The most articulate message would be to fire her. Presumably, he doesn’t have the authority. If he does, he’s a weenie. If he doesn’t, those who do have the authority are fools.

Meanwhile, the ridiculous Ms. Porkalub is determined to get herself out of a hole by furiously digging. She has posted tweets like these: 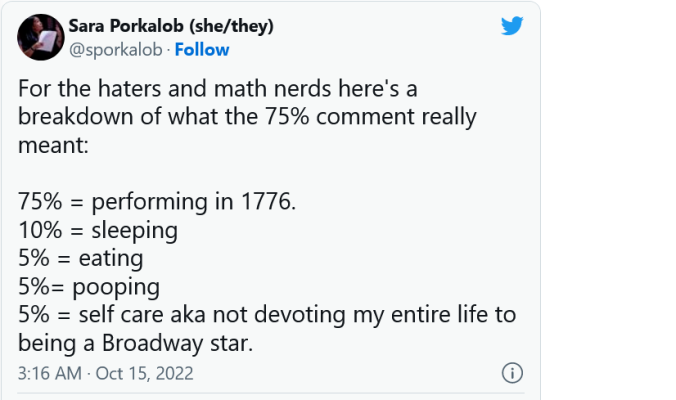 These move her beyond mere asshole status to the dark Ethics Alarms category of fick: someone who is unethical and proud of it.

I would have fired this ethics villain the second I saw the interview, and I guarantee that if she isn’t fired, the production will suffer.