Let me be clear: Tiffany Cross, recently fired as a show host by MSNBC, had and has no business being an on-air political pundit. She should never have been hired, and any legitimate journalism organization would have fired Cross years ago.

Let’s see: Cross has said that a “civil war” in the U.S. requires progressives to “pick up a weapon” in the fight for democracy. She called Supreme Court Justice Clarence Thomas “Justice Pubic Hair on My Coke Can,” referring to one of Anita Hill’s unsubstantiated accusations regarding Thomas creating a hostile work environment with sexually provocative jokes. She warned viewers about “White replacement” and called Republican members of Congress “White supremacists.” She openly rooted for Kyle Rittenhouse to be convicted, primarily because he is white, and said that those applauding his acquittal—since he wasn’t proven guilty—were disgusting. More recently, Cross sat by smiling as racist Ellie Mystal called Herschel Walker a “negro” because he’s a Republican.

Yet she was just dismissed from her lucrative gig at MSNBC because, the word is, she violated the network’s standards. Wait: MSNBC has standards? It still employs Al Sharpton, whose entire career was built on an anti-white, police-smearing defamatory lie which he has never apologized for or acknowledged. It employs Joy Reid, who is not only as much of a racist as Cross, she is inclined to post things like this: 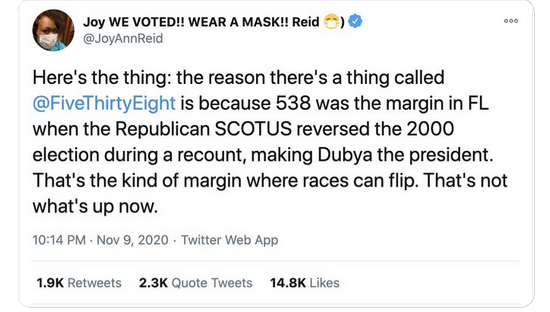 In other words, she just makes stuff up: 538 was not the margin in Florida, SCOTUS did not “reverse the election” (at no point was Gore found to be ahead in Florida), and FiveThirtyEight is named after the number of votes in the Electoral College. MSNBC accepted Brian Williams as an anchor after he had been fired by NBC for making up tales about his work during the Iraq War: NBC decided that Williams wasn’t trustworthy or professional enough to work there, but was good enough for MSNBC. No wonder. MSNBC still lets Lawrence O’Donnell have a show, even after he attacked Mitt Romney based on Romney’s religion.

Apparently what got Cross canned was saying in an interview not on MSNBC that Florida was “the dick of the nation.” That’s not even an original insult, and it certainly isn’t as vulgar as, say, Bill Maher calling two Republican women “a cunt” and “a twat,” or Stephen Colbert referring to President Trump as Putin’s “cock-holster”—and neither wit was fired by HBO and CBS, respectively. How would Cross know what breach of civility, professionalism or judgment would be deemed unacceptable among the biased progressive media, much less her network? The only sign of a standard I can find at MSNBC is the Martin Bashir standard: “Never say that Sarah Palin deserves to have someone shit in her mouth.” Tiffany had managed to steer clear of that one, so far at least.

This is the problem with organizations that have no real standards of conduct and don’t care about integrity: they place employees in an unfair position. The presence of Al Sharpton, a “star” too big to fire, means the whole network is corrupted by The King’s Pass. It has shown that it doesn’t mind fake news ( thinking of you, Rachel Maddow) and ignores or gives slaps on the wrist for conduct on the air that  even CNN and Fox News wouldn’t tolerate. How was Tiffany to know that her gutter-level joke about Florida would be seen as Crossing the line?

True, MSNBC is a marginally less unethical news source now that she’s gone, but MSNBC has made it abundantly clear that ethics isn’t its priority, or even on its radar at all. For whatever reason, the suits there just wanted to get rid of Cross. “Standards” had nothing to do with it.