There have been many unethical candidacies for U.S. President in American history, and some of them have been successful.

I am not referring to unethical candidates for the job, for there have been too many of them to count. An unethical candidacy occurs when a candidate’s purpose for seeking the job, method of doing so, and/or the effect on the nation of his or her campaign is especially reckless, harmful, or irresponsible. Perhaps the first unethical candidacy was that of Aaron Burr, who attempted to exploit a flaw in the election process to steal the presidency from his position as a vice-presidential candidate. Rutherford B. Hayes allowed himself to be put in office by an undemocratic back-room deal when his opponent, Samuel Tilden should have won both the popular and electoral vote.

Teddy Roosevelt’s decision to oppose his old friend, President Taft, in 1912, splitting his party, breaking his word (he had earlier refused to run for what was in essence a third term, agreeing it was best to hold to George Washington’s tradition), and all-but-insuring Woodrow Wilson a victory, was an exercise in ego and hubris. Eight years later, Sen. Warren G. Harding, who privately expressed doubts about his ability to fill the highest post in the land, may have allowed himself to be manipulated and used by corrupt political operatives for their own purposes. Franklin Roosevelt recklessly ran for his fourth term knowing that he was seriously and perhaps terminally ill, and didn’t take care to ensure that he had a competent Vice-President. (He, and the U.S., were lucky in that regard.)

Gov. George Wallace’s third party presidential run in 1968 was explicitly racist. The beneficiary of that candidacy, President Richard Nixon infamously pursued re-election with a new low of unethical and even illegal tactics against the Democrats. There have been others.

Donald Trump’s revolting candidacy, as yet unannounced, cannot fairly be called the most unethical presidential candidacy, but it is early yet. It may well prove to be one of the most harmful. As the United States faces some of the most difficult challenges in its history, Trump has chosen to use the nation’s process of deciding on its leader for his own ego gratification and self-promotion, without  preparation for the job, deference to fair campaign rhetoric, or acknowledgment of his own fatal flaws as a candidate. END_OF_DOCUMENT_TOKEN_TO_BE_REPLACED

The ABC News version: "I'm going to make him an offer!"

“Fight like a girl” —that is, like Palin—immediately spread over the internet, one more example of Palin’s uncanny bumper-sticker catch phrase talent. Now here is how ABC’s “This Week with Christiane Amanpour” played the video today:

“What we need is for you to stand up, GOP, and fight. GOP leaders need to learn how to fight—!” END_OF_DOCUMENT_TOKEN_TO_BE_REPLACED 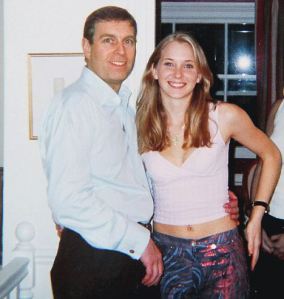 Prince Andrew with one of his friend's victims in 2001

The ethics of friendship is complicated.

President Bush claimed to be friends with Vladimir Putin. F.D.R. once said that Josef Stalin was his friend. President Obama was famously friendly with dubious characters like Rev. Wright and William Ayres.

History is full of heroes and near-heroes who had infamous friends, though the extent of the often friendship is difficult to know. Sammy Davis, Jr. and Elvis were supposedly buddies with Richard Nixon. Bill and Hillary Clinton were close friends with Dick Morris. Wyatt Earp was a life-long friend of “Doc” Holliday; Andrew Jackson may have been friends with pirate Jean Lafitte, who helped him win the Battle of New Orleans. We simultaneously celebrate loyal friends, and yet we also judge people by the company they keep. Should we condemn individuals who have friends with serious character flaws or a history of unsavory acts? Or should we admire them for sticking with their friends when everyone else is turning against them? END_OF_DOCUMENT_TOKEN_TO_BE_REPLACED 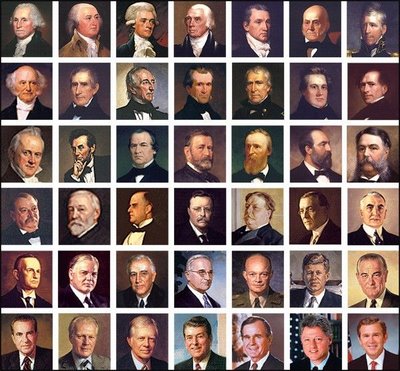 In commemoration of President’s Day, Ethics Alarms presents the ethics wisdom of the remarkable men who have served their country in the most challenging, difficult, and ethically complicated of all jobs, the U.S. Presidency.

Ladies and Gentlemen, the Presidents of the United States:

George Washington: “I hope I shall possess firmness and virtue enough to maintain what I consider the most enviable of all titles, the character of an honest man.” END_OF_DOCUMENT_TOKEN_TO_BE_REPLACED

John Hawkins of Right Wing News persuaded 43 conservative bloggers to send him their list of the twenty worst Americans in history. He then compiled a list of “The 25 Worst Americans” using their responses, with the rankings based on the number of blogger who listed an individual.

The list is disturbing, but not for the reasons you think.  What does it say about the priorities and values of conservative bloggers that the “worst American” among all the criminals, serial killers, scoundrels and sociopaths America has produced is, by this method of measurement...wait for it…