[ Forgive me for using the above clip in the jokey context in which it was presented: It was the best I could find on YouTube, meaning that I could embed it easily. ]

During remarks she made in Sunset, Louisiana this week on a stop to highlight the value of bringing high-speed broadband internet to communities, Harris got herself stuck on the phrase “the importance of the passage of time” in between her usual inappropriate giggles. Then, today, yet another Harris staffer fled the coop, moving former Speaker Newt Gingrich to say,

“You know, he [Biden] may or may not have cognitive decline problems at his age, but at her age, she’s just dumb. Let’s be clear, Kamala Harris may be the dumbest person ever elected vice president in American history and that’s why people keep resigning.If you were her national security advisor, and you were competent, and you’d worked hard, and you knew what you were doing, and you watched her in Poland break up laughing when she’s asked about Ukrainian refugees, you had to feel a sense of total humiliation. So I’m not surprised that that particular advisor resigned because it’s very clear that Kamala Harris should never, ever be allowed to leave the country.”

Is that a fair thing to say?

END_OF_DOCUMENT_TOKEN_TO_BE_REPLACED

I know Ethics Alarms has covered this before ( like yesterday’s compendium, #4), but it’s “Popeye” territory: there’s only so much I can stand. Or “stands.”

Several sources are quoting (Ugh! Yecchh! Ptui!) Hillary Clinton’s assertion that poor Kamala Harris is being unfairly criticized because of her gender. You know, like Hillary was. ( I actually typed that without breaking up laughing. It’s a Christmas miracle!) The losing Presidential candidate responsible for the most incompetent campaign in U.S. political history said,

“There is a double standard; it’s sadly alive and well,” Clinton told the newspaper. “A lot of what is being used to judge her, just like it was to judge me, or the women who ran in 2020, or everybody else, is really colored by that.”

Harris, meanwhile, has been reportedly whining to staff and confidantes about how none of the previous 48 Vice-Presidents were covered as negatively as she, nor so insulted by critics. So now we know that on top of her other throbbing deficiencies, Kamala Harris don’t know much about history, to quote Sam Cooke. END_OF_DOCUMENT_TOKEN_TO_BE_REPLACED

I always thought Glenn Yarbrough was the B version of Gene Pitney, who was better. Did you know that Gene Pitney wrote “Hello, Mary Lou (Goodby Heart)” and “He’s a Rebel”? He’s a singer we don’t usually think of as a songwriter, but like the great Bobby Darin, he was a prolific and a successful one who is in the American Songwriters Hall of Fame. Unlike Darin, however, Pitney didn’t record his own songs, saying in one interview that as odd as it sounds, his best songs were not ideal for his own voice and style.

The melody of “Baby the Rain Must Fall” was the creation of Elmer Bernstein, the acclaimed composer of so many classic film scores, like “The Magnificent Seven” and “The Great Escape.”

And thus endeth the pop culture sermon for the day….

More on the scary-horrible Kamala Harris…

1. Well that didn’t take long! Already the narrative is starting that criticism of Kamala Harris is based on racism and sexism, and not her dreadful personality, sketchy past, and career baggage.  Wholly predictable, and designed to keep the public just getting to know Harris from really learning about her by stifling critics. Journalists, of course, can be counted on to stifle themselves when a Democrat has a problematical record.

2. More spin...Dumped “Meet the Press” host David Gregory actually went on the air this morning to say Harris was “the safe choice.” Biden had no safe choices once he was trapped into naming a check-box candidate.  What Gregory meant, I assume, was that she was the least risky in a slate of horrible options. That is true.

3. “How deep is the ocean? How high is the sky?“…I neglected, in last night’s post, to recall this example of Harris’ hypocrisy, from April 2019, when Harris was widely regarded as a frontrunner for the Presidential nomination:

“I believe them and I respect them being able to tell their story and having the courage to do it,” Harris said at a presidential campaign event in Nevada.

Then, after Harris’s run for the White House flopped and she began stalking the Vice-Presidency, Harris supported Biden and dismissed the accusations of Tara Reade, though she had savaged Brett Kavanaugh based on Dr. Christine Blasey Ford’s far more dubious accusations. I can’t wait to hear how feminists explain that one.

I wonder: Who has the greater integrity vacuum, Elizabeth Warren or Kamala Harris?

Luckily for Harris, if you are “of color,” you can’t be a  hypocrite, or at least no white critic can point out you’re one. Those are the rules… END_OF_DOCUMENT_TOKEN_TO_BE_REPLACED 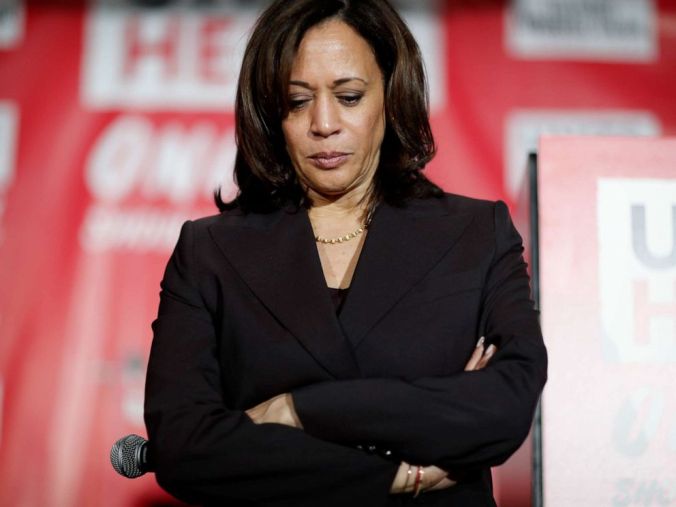 1. Ethics Alarms readers called it! Among those who were willing to choose the least bad of the three choices remaining to Biden, given his mandate to choose a black woman, Harris was the winner.

2. How objectively awful is Kamala Harris? This is the woman Joe Biden placed a heartbeat from the presidency, from the post here of December 3,  2019:

Let us stipulate: the failure of Kamala Harris to thrive in the race for the Democratic nomination for President was not because Democratic voters are racist or sexist.  It is because she was a lousy candidate from the beginning. Checking off boxes is never enough, thank heaven. She is a woman, “of color,” a lawyer and a Senator from a large and powerful state. To top it all off, Harris is relatively young, and attractive. Perfect!

Except it was easy to see that she was an empty suit with a penchant for saying stupid things, often things she couldn’t possibly believe and that contradicted her record as a prosecutor. She said that it was “outrageous” that the Trump administration wanted to deport illegal immigrants who had committed crimes. [Me: “It is not and cannot be “outrageous” to say that any illegal immigrant, criminal or not, qualifies for deportation. To maintain otherwise is to say that the United States cannot enforce its immigration laws, and not only that, it is “outrageous” to enforce the laws. Is that the position of the Democratic Party? “] She said that she supported legalizing pot because it brought people “joy.” You know, like heroin, rape, and child molesting. She said, when Joe Biden correctly pointed out that a President could not ban “assault weapons” by executive order, she responded, “Well, I mean, I would just say, hey, Joe, instead of saying, no, we can’t, let’s say yes, we can.”  Horrified when she saw the exchange,, law prof Ann Althouse wrote, “The transcript cannot convey the feeling and expression in Kamala Harris’s  [ response]. It is so awful, so lightweight and dismissive of constitutional law (and without any of the dignity of constitutional critique.”

There are plenty more catalogued here, and it is hardly exhaustive. Harris flopped because she proved beyond a shadow of a doubt that she was unqualified to be a Senator, much less a President. As if that wasn’t enough, she couldn’t manage her campaign, which had disintegrated into finger-pointing and defections. When Barack Obama was challenged in 2008 over his lack of leadership experience, he cited the success of his campaign. Slim indeed, but  Harris couldn’t even say that.

As the writing on the wall began to be undeniable, Harris stooped to race- and gender baiting, expressing doubts as to whether a “woman of color” could be elected President (in such a racist, sexist nation, she implied.) No, Senator it’s just that you can’t be elected.

END_OF_DOCUMENT_TOKEN_TO_BE_REPLACED

I’m not exactly disappointed that Biden passed on challenging Clinton and Sanders for the Democratic nomination, in part because if I ended up having to vote for him next November, I might have gone directly from the voting booth to the bridge. Still, ol’ Lunchbucket Joe would have offered some hope that a presidential candidate would emerge in this election cycle that it wouldn’t be historically irresponsible to vote for.

Conservative pundits keep writing that Biden would be identical to Obama, his third term. In our history, do you know how often that assumption has proven accurate.? Never. Van Buren was supposed to be Andy Jackson’s third term; Taft was Teddy’s, Bush was Reagan’s. The only difference now, and it is significant, is that in those three instances, the previous POTUS was strong and effective. Obama, on the other hand, has been weak, ineffective, destructive and incompetent. It is difficult to imagine how Biden could be worse.

Forget about Obama, though: why would Biden have been preferable to the Democrats who are serious candidates? Chafee and O’Malley aren’t worth discussing; they aren’t going to be on the ballot. As for the rest… END_OF_DOCUMENT_TOKEN_TO_BE_REPLACED

On CNN, the gang was discussing and chuckling over one of Joe Biden’s lesser gaffes, not that the same gaffe wouldn’t have had them screaming and shaking their fists if, say, Chris Christie had spoken similarly. In this case (with Biden, gaffes should be given case numbers; I’m guessing this one would be about #6,782,304), Biden used the uncivil term “bitch” when referring to the role of Vice President. This provoked Chris Cuomo to express his affection for Lunch Bucket Joe, saying…

“I still love Biden for what he is. I just do. I think his candor is refreshing – and when he is insensitive to something, he owns it. What more can you ask for? Perfection?”

What does this even mean? Let me rephrase that. What the hell does this even mean? “For what he is”? Does Chris mean “an ongoing embarrassment”? A gaffe machine a heartbeat away from the Presidency? An unapologetic clown in a position of high responsibility and influence? You know what Chris really means, don’t you? He means nothing more nor less than, “I love Joe Biden because I love liberal Democrats, even silly, inept, dumb ones.”

Is that an admission that we should take lightly? Does it matter? Yes, I think it matters. END_OF_DOCUMENT_TOKEN_TO_BE_REPLACED