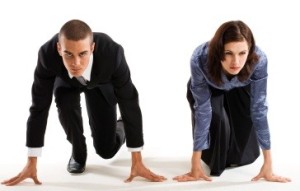 Some background, relevant to this topic:

I have mentored women executives. I have reported wage discrimination based on gender to an employer. I have called out a supervisor on sexual harassment, and, inspired by a younger sister who is twice the lawyer I could ever be but who had to work twice as hard to get the recognition I have, I continue to be active in opposing sexual discrimination and continue to help companies develop harassment-free cultures, which I view as an ethics issue. I mention this to try to demonstrate up front that I am no apologist for gender discrimination in wages or in anything else, as I note that today perpetrates a dishonest statistic that has been circulated by advocacy groups and uncritically accepted by the media and elected officials for decades, and ending the misinformation is wildly overdue. I repeat: I want women to be hired and paid on merit, fairly and on the same basis as men. But the lies have got to stop, and April 12th is the perfect day to stop it.

This is “Equal Pay Day,” designated by the National Committee for Pay Equity, which represents feminist groups including the National Organization for Women, Feminist Majority, the National Council of Women’s Organizations and others. April 12 is supposedly how long into the year “women”–as if this could possibly apply to all women— have to work at the same jobs as men before they earn what their male colleagues already earned the year before. The so-called 77% claim, that women earn only $0.77  for every dollar earned by a man for equal work, may well have been true decades ago. But it hasn’t been an accurate figure for decades.

The Department of Labor’s Time Use survey shows that full-time working women spend an average of 8.01 hours per day on the job, compared to 8.75 hours for full-time working men, or 9% less. This accounts for a large chunk of the statistical wage disparity.

Choice of occupation accounts for another big chunk in the wage gap. Women, far more than men, accept jobs emphasizing stability, better working conditions, regular hours, persona; satisfaction and having greater flexibility. Back to my sister: she has insisted on flexible hours to care for her two children, and was paid less in the same job category as male colleagues who didn’t have the burdens of single motherhood. She made the choice. It wasn’t gender discrimination: the larger salary was there, if she wanted it for what she had to give up.

There is another big factor that I had personal experience with as a manager of predominantly female staffs years ago, though I have never seen any reference to it in studies.  Men are generally better negotiators than women, who tend more than men to accept early offers rather than to bargain for more money. This can be an advantage, in a strange way: running small non-profits, I often hired women over men  because I could afford them. If I had authorization to offer up to, say $30,000 for a position but was budgeted for $26,000, I consistently found that I could get a woman with the same qualifications as a male competitor for less, often allowing me to hire an extra staff member with the funds I saved. It is not the employer’s ethical duty to negotiate against himself, though I did that too, when a talented female applicant asked for an amount below my lower limit. A lower negotiated salary in an early career job can easily translate into many thousands over a career. I have advised many female staff members to get negotiation training. (I have to say, not many did.)

There is still gender bias too; undeniably. The gap in pay for equal jobs, however, is not the clichéd 77%, and it is closing fast. A new study of 2,000 communities by a market research company found that in 147 out of 150 of the biggest cities in the U.S., the median full-time salaries of young women are 8% higher than those of the men in the same community. In two cities, Atlanta and Memphis, those women were making about 20% more. The  study suggests that the new reverse gap in that demographic is bigger than previously thought, with young women in New York City, Los Angeles and San Diego making 17%, 12% and 15% more than  male peers, respectively. It applies in smaller areas too, like the Raleigh-Durham region and Charlotte in North Carolina (both 14% more), and Jacksonville, Fla. (6%).

Some of those gains are lost later, as professional women who take time off in their thirties or even forties to have children lose ground in the salary competition to men on the same career track. Still, the monolithic image of the woman working just as hard as a male colleague for 23% less is simplistic, misleading and wrong, no matter how easy it is for feminists to paint it on placards. Dumbing down complex issues into simplistic numbers leads to misleading debates, a misinformed public, and bad policies. The examples today are too many to list, but the 77% is the only bad statistic to have its own day.

We should stop celebrating misinformation.