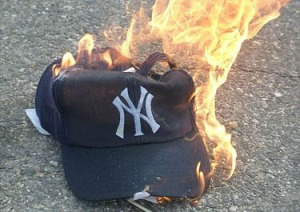 I think Hurricane Irene was sent by God to help the Red Sox. Hear me out! It makes mores sense than Michele's theory!

“I don’t know how much God has to do to get the attention of politicians. We’ve had an earthquake; we’ve had a hurricane. He said, ‘Are you going to start listening to me here?’ Listen to the American people because the American people are roaring right now. They know government is on a morbid obesity diet and we’ve got to rein in the spending.”

—-Rep. Michele Bachmann, GOP presidential hopeful and shameless demagogue, joining the discredited ranks of Pat Robertson, Glenn Beck and others to assert that weather conditions constitute proof that God agrees with her.

You can read my views on this arrogant, manipulative species of idiocy here, here and here.  I’ve written about it too much, and as an American living in the 21st Century, I’m embarrassed that I should have to write about it at all.

I have rock-bottom low expectations of televangelists like Robertson, and only slightly higher ones for media blow-hards like Beck. A member of Congress and presidential candidate should be able to meet a much higher standard. Bachmann, however, is obviously shameless as well as deluded, and, I think it’s time to conclude, just not very bright. One has to be fairly challenged mentally to believe this kind of nonsense, but really brick-dumb to announce such a belief publicly. Interesting question: Would it be less offensive  if she didn’t believe that extreme weather is God’s political statement about small government, but said it for effect? Clearly, no. As dumb as it is to say this when one does believe it, it is beyond belief dumb to announce it when one doesn’t—and dishonest in the bargain.

It’s funny, though. I assumed the hurricane was God’s way to make sure the New York Yankees had to play a double-header in Baltimore on Sunday against the Orioles, making it harder for the Yankees to win both games and increasing the likelihood that the Red Sox, whom God obviously roots for since He is infallible, would lengthen their lead in the A.L. East. And the earthquake…what was God up to with that, since the only structure in D.C. that suffered serious damage was the National Cathedral? Why would God do that? I just don’t think he would; I think Satan was responsible for the earthquake. Of course, that raises the possibility that the Prince of Darkness is the one trying to express his dislike of  big government, which would make Bachmann the candidate from Hell (hmmmmm…), except that the hurricane, which was presumably God’s idea, put FEMA to the test, and Ron Paul says that FEMA is part of government waste. Why would God send weather to show His dislike of big government when the hurricane will showcase one of the benefits of big government?

Michele, you just have to think this through some more. The Red Sox theory makes the most sense.

17 thoughts on “Unethical Quote of the Week: Rep. Michele Bachmann”