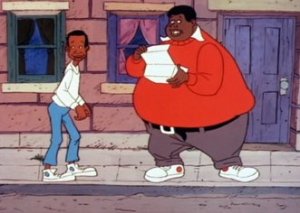 "Bill! They're putting me in foster care! How will you make THAT funny?"

Several recent ethics issues have raised the slippery slope question, which is itself a slippery slope. The rationale for any reasonable principle or act can usually be ratcheted forward in degrees until it becomes malevolent, dangerous or repugnant, including freedom, trust, loyalty, charity and honesty. Thus the easiest argument, at least for the mentally dexterous, that anything is unethical is the dreaded slippery slope.

The simple rebuttal to this is usually “let’s wait and see.” To claim that conduct is unethical for what it might lead to rather than for what it actually does is often, perhaps even usually, based on an unwarranted assumption, or a worst case scenario specifically concocted to foil otherwise unobjectionable conduct. When it is not based on an unwarranted assumption, however, is when proposed conduct or a new policy permitting it shatters a social norm or cultural standard that had previously been considered sacrosanct. In these cases, the slope isn’t merely slippery—which suggests “Be careful where you step next!”—but greased, meaning there is no longer any traction at all to stop a rapid slide to the bottom. A better cliché to use in such cases is “opening the floodgates.” Or perhaps “off a cliff.”

The recent post about the Dartmouth researchers who suggested that all manipulations of graphic images of celebrities be labeled as such is, I would argue, more floodgates than slippery slope. There is no obvious delineation point to stop the principle behind this oppressive constraint on illusion from spreading far beyond its origin. Similarly, the argument being made by the family of the mother with Stage 4 cancer that US Air is ethically obligated to refund the non-refundable tickets they could not use because of her terminal illness has no clear limits or coherent application. Are the refunds required because the mother is terminal? If she goes into remission, would the family be obligated to give the money back? What if she was only paralyzed? If the whole family was squashed by a boulder, would the airline be obligated to refund the money to their next of kin? What if the mother wounded herself terminally in a suicide attempt—would that change US Air’s supposed obligation of compassion? If so, would that mean that if the mother’s Stage 4 breast cancer occurred because she neglected to follow a physician’s recommended treatment, US Air could then refuse to refund the money without being pilloried for it? Sometimes that greased slope carries us into a swamp.

Now from Cleveland comes the story of the 200 lbs. + 8-year-old Cleveland Heights boy who has been taken from his family and placed in foster care because county case workers decided that his mother wasn’t doing enough to control his weight.

You can, and should, read the story here.  I find it shocking and Orwellian, and I am especially alarmed that the incident hasn’t caused more of an outcry than it has. A 200 pound 8-year-old is a concern, but he is not in imminent danger. The story’s details are infuriatingly vague—How tall is he? What does he eat? What are his genetics like? —and contain some details that make you want to scream at the computer screen. For example, what seems to have triggered the removal is that the child started gaining weight “rapidly” after a period of weight loss. Well, eight-year-olds have a tendency to grow. There is little in the story to indicate how the mother was neglecting the boy’s health or contributing to the weight gain.

What the story does indicate is that this outrageous decision—the first of its kind, as far as we know—is a product of another slippery slope, the government’s increasingly obtrusive efforts to control individual health choices because health care funding largely ignores individual accountability for risky lifestyles.  Astoundingly, the bioethicist interviewed in the story (Arthur Caplan, a professor of bioethics and medical ethics at the University of Pennsylvania) is less critical of the abuse of government power inherent in removing a child from his family than he is of the government’s failure to stop companies from “advertis[ing] unhealthy food and put[ting] toys in kids’ meals.”

Was he concerned about the violent intrusion into the relationship between a mother and her child? Not really.  He’s concerned about logistics. “The government cannot raise these children,” Caplan says. A third of kids are fat. We aren’t going to move them all to foster care. We can’t afford it, and I’m not sure there are enough foster parents to do it. ”

When a society sees more justification for removing a child from his family because he is fat than when his mother is on crack, has no job, beats her children or lives with a succession of men of questionable character, the slippery slope leads to, and off, a cliff.  That cliff represents government intrusion into personal decisions, lifestyles and relationships to a degree that was previously unimaginable.

2 thoughts on “The Fat Kid, the Slippery Slope, and the Cliff”