(I know everyone is going to hate this.) 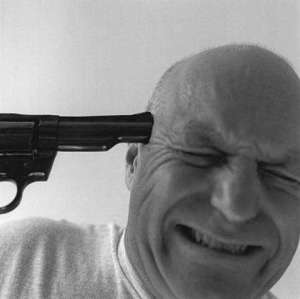 "Be compassionate, damn you!!! This thing is loaded"

Having a terminal illness does not justify bullying corporations into waiving fair and valid contracts, and using the media and public opinion to extort money out of companies that they have no obligation to surrender is unethical.

US Air has capitulated to a classic example of compassion bullying and agreed to refund the non-refundable airline ticket Lynn McKain purchased as part of a family vacation to Belize. This occurred after the McKain family sicced the media on the airline when a recurrence of breast cancer caused Lynn to cancel the trip on doctor’s orders. She requested a refund based on her misfortune, although there was nothing in the deal that suggested that there were exceptions to the ticket’s non-refundable features. Then, after the airline politely declined to waive the terms the McKain’s had agreed to in order to pay discounted ticket fees, the family alerted the media, with predictable results. There were heart-wrenching stories about McKain’s cancer treatment, making out the airline as an avaricious, mean-spirited cabal of inhuman monsters.

Finally, the airline gave in. It had no choice; the media and the McKain’s would keep the pressure on, making the episode a full-fledged public relations catastrophe, unless it did. The Compassion Bullies won, as they almost always do. Don’t think for a moment that this is good triumphing over wrongdoing, however. It is the opposite.

This was a shakedown to the tune of $4200. Instead of a gun or a hostage, the media and the McKain’s used the sympathy of people who were perfectly willing to demand compassionate behavior that wouldn’t cost them a thing. It’s a corporation, after all. Why shouldn’t it give away money to a family that is enduring a crisis? Make it hand over the money. Condemn it if it balks at surrendering the money. Even though the family has no right to it, and even though everyone in a free society is supposed to have a choice under which circumstances they engage in charity, with what and for the benefit of whom. Give the money to us, demanded the McKains of US Air.

Or you’ll be sorry.

The $4200 became the airline’s cash as soon as the tickets were purchased. It didn’t matter whether the tickets were used to fly to Belize, or to start a barbecue. But because everyone—yes, with reason—feels sorry for a young mother battling Stage 4 cancer, this gives Compassion Bullies a sense of entitlement and power. Their misfortune means the rules shouldn’t apply to them. That a company which fulfilled every aspect of a contractual arrangement the family entered into with its eyes wide open—non-refundable means non-refundable—wants to hold on to what is legally and ethically its property is regarded as selfish and  irrelevant. The company has to do what everybody else thinks would be kind and generous. The principle: “Make Others Do Unto Others What You Would Have Them Do As Long As It Doesn’t Cost You Anything.”

As I wrote the last time I confronted the Compassion Bullies (Remember  Enzo and “The Barefoot Contessa“?):

“Do all of us have an obligation to do a favor for a stranger simply because they asked for it? No. Do we have an obligation to do the favor if the stranger is sick? Young? Old? Dying? No, no, no and no. Accept any other answer, and we are declaring that whenever [a sympathetic party] delivers a request, it is really a demand, backed by the threat of public humiliation….dictatorship of the desperate, attack of the compassion bullies….Being kind and generous is ethical, but saying no when there is no ethical duty to say yes is not unethical.”

But forcing someone, yes even those evil corporations, to give up what is rightfully theirs, as the McKains and their media allies did to US Air is unethical. And the public should stop letting the Compassion Bullies get away with it.