The headlines shout out: “World’s Most Famous Atheist Admits: I Can’t Be Sure God Doesn’t Exist!”

Wow, what a confession. Stop the presses. 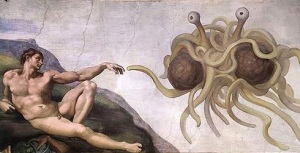 Can anyone be 100% sure this doesn't belong in the Sistine Chapel?

To his great credit, and knowing how the 50% (that is, those of below median intelligence, a sad number of whom reside in the profession of journalism) would react, Prof. Richard Dawkins, the British evolutionary biologist who is point man for the atheist assault on religion, told a student audience at Oxford during a “discussion” ( translation: informal debate) with the Archbishop of Canterbury that he thinks “the probability of a supernatural creator existing is very very low,” but he can’t be 100% certain.

Well, of course not. While this will be taken as a sign of weakness by the faithful who, of course, are 100% certain of the Supreme Being’s existence, no honest, intelligent, fair individual suffering from less than clinical levels of egomania and omniscience could possibly claim to know with certainly where the universe came from. Bravo to Dawkins for his honesty and integrity.