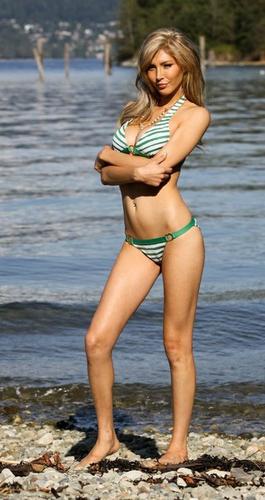 Jenna: too masculine for Miss Universe?

The Miss Universe Canada organizers have kicked contestant Jenna Talackova out of their beauty pageant because she was born male.  Fair? Well, the qualifications for the pageant require that an entrant be a “naturally born female.” I’m sure that was seen as a clear and reasonable restriction when it was devised, but let a few lawyers at it today. Jenna says she was always female, but just trapped in a male body. She was also “naturally born.” Hmmmm.

[UPDATE: (4/10/12) On April 5, the pageant announced that Talackova would be allowed to compete after all, and announced a rules change that will allow transgendered competitors next year.]

Jenna falsely stated on her entrant forms that she was “born female.” Since she has told officials that this wasn’t true, she is obviously no lawyer, but really: why shouldn’t a transexual be able to compete? The issue should be whether she’s a female now, right? The pageant might as well require that all contestants must be born gorgeous. Miss Universe Canada could, I suppose, duck the problem by requiring that no entrant can have appearance-enhancing surgery. Of course, then the pageant would have no contestants at all.

Jenna lied on her form, and that’s certainly enough to justify disqualifying her. But for the future, I’d suggest that the pageant enter the 21st Century. Transexuals are regarded as being members of their their new genders by the law, and should have all attendant rights, including the opportunity to enter a beauty contest. Nothing says a transgendered entrant has to win, but if one did—and Jenna certainly appears to have had a shot—it would be a rare example of the Miss Universe Pageant having positive social impact, for a change.

128 thoughts on “Fairness and the Transgendered Miss Universe Contestant”