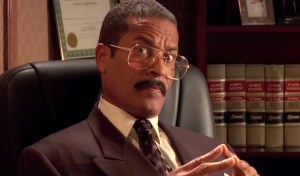 A perfect lawsuit for Jackie!

Not legally unethical, mind you, oh no no no! Remember, a lawyer is not unethical when he brings a crack-brained lawsuit as long as he can muster some vaguely plausible theory to support it. Even if he thinks the case is a long-shot of long-shots, if the lawyer has a good-faith belief that it could prevail without violating the natural laws of time and space, it’s “ethical.” Thus it is that the lawyer for the victims of a car crash caused because the teenaged driver of the other vehicle was reading a text message from his girlfriend can ethically bring a lawsuit against both the driver, Kyle Best, and his girl friend.

The victims, David and Linda Kubert, each lost legs in the bloody head-on collision. I don’t blame them for being angry, or for wanting to maximize the possible sources of damages for a life-altering accident that should not have occurred. Nonetheless, their assertion that the texting girl friend was electronically “in the car” by virtue of her text message sets the stage for a terrible precedent that would allow irresponsible drivers who cause mayhem by reading or answering text messages when their eyes should be on the road to sue those they were communicating with on an absurd consequentialism theory. Nobody made Best read the text message but his own miserable judgment. His girlfriend new he was driving? So what? It isn’t her responsibility to avoid a harmless act because he might turn it into the catalyst for a tragedy by his own recklessness. The theory of the lawsuit is unethical, because it unfairly assigns fault were there is none, divides accountability that is clear and indivisible, and threatens to create a terrible legal precedent that could, among other things, make reality out of the gag lawsuit on “Seinfeld,” when Kramer argued (with the legal assistance of Johnny Cochran clone “Jackie Chiles”) that a well-endowed female pedestrian wearing her brassiere on the outside cause his auto crash.

Now here’s your Bonus Ethics Quiz. If I had taken the cheap and tawdry road of making the joke that was teed up and ready, arguing that the Kuberts “didn’t have a leg to stand on,” as I am 100% certain that Fark.com will do soon if it hasn’t already, would that be…

6 thoughts on “Now THIS Is An Unethical Lawsuit (And a Bonus Ethics Quiz!)”