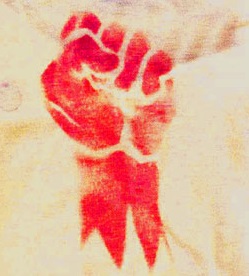 Here I was, naively thinking that the threatened jailing of a student for resisting a teacher’s efforts to make him remove his T-shirt with the image of a rifle on it was the most shocking proof of how imperiled free thought and expression are in today’s fearful, dim-witted and child abuse-rationalizing America. Then this jaw-dropping story came across my screen, and I realized that the situation is far worse than I imagined or could imagine—and I have a pretty good imagination.

Now the question is, I think, this: what are we going to do about it?

Nineteen-year-old Justin Carter has been in prison, since March. You will not believe why, or perhaps, being both paranoid and right,  you will. A Facebook friend and video game pal described him in an exchenge as “crazy” and “messed up in the head,” and Carter replied, with sarcasm detectible by anyone who isn’t an SS officer. “Oh yeah, I’m real messed up in the head, I’m going to go shoot up a school full of kids and eat their still, beating hearts. lol. jk.” A Canadian busybody read the exchange, and decided to report Justin to the Austin police, who then arrested him–he was 18 at the time—searched his family’s house, and charged him with making a “terroristic threat.”

The people who have done something terribly, unforgivably wrong, in fact, are President Obama, Vice President Biden, the hysterical exploiters of Newtown, the Justice Department, the IRS, the NSA, the members of Congress and the media who make excuses for the secret and excessive gathering of personal private data to “keep us safe,” and every other voice urging a nation founded on individual freedom and liberty to give up that core element of the American soul in cringing capitulation to fear that death is lurking around every corner.

“Justin was the kind of kid who didn’t read the newspaper,” his father told reporters. “He didn’t watch television. He wasn’t aware of current events.  . . . These kids, they don’t realize what they’re doing. They don’t understand the implications. They don’t understand public space.” Stop it! Just stop it—Justin understood public space just fine—what he didn’t understand is the relentless advancement of the disgusting, negligent, arrogant and indecent betrayal of the Constitutional rights in this government presided over by an alleged “Constitutional scholar.”  I didn’t understand it either. I didn’t think what happened to Jared Marcum—the teen in the NRA T-shirt—could happen in this country without immediate and near unanimous outrage, much less what has happened to Justin Carter. Did you?

Justin’s father also is warning other parents about the dangers of social media comments saying they “can and will be used against you.” Don’t warn them. Tell them to resist the creeping totalitarianism, indoctrination, speech and thought control seeded and harvested by this “progressive” government—it is progressive to throw teenagers into jail for making jokes to friends, you see, because poor Gaby Giffords reads a script saying “Something must be done…too many people have died” to Congress—to stop saying “Be careful,” to spread the story of the persecution of Justin Carter far and wide, and to start saying….

“We refuse to accept what you are trying to do to our spirit, our children, and America.”

34 thoughts on “The Persecution Of Justin Carter And The Consequences Of Fear-Mongering: If This Doesn’t Make You Angry, Something’s The Matter With You”