Here are four logos from U.S. institutions of learning.  Each was or  is under attack by groups of students or administrators as being “offensive,” and in each case, the school’s administration either spent or is spending time and money to comply with the concerns. You have to guess the reason for the offense in each case.

Give up? Well, back in 2009, we have recently learned, Karen L. Gould, who had just taken over as the first woman president of Brooklyn College, raised $107,000 to replace the old logo (the silhouette of the school’s landmark La Guardia Hall clock tower), because she thought it looked like a giant penis. [An earlier version of the post surmised that she therefore believed the logo was sexist. There is no evidence of that; it was my surmise and my error.]

She would not be happy living in Washington, D.C., clearly.

Ready for the next one? Here’s #2, from the University of Connecticut:

No, no penis, just too scary for those delicate flowers of womanhood, according to a University of Connecticut student feminist who has complained to that school’s female president. She claims the Husky is menacing to women, and suggests rape. No word on what fate is in store for the dog.

Now #3…the University of Kentucky. Can you spot the offensive part?

Well? Yes, it’s another rampaging penis, masquerading as a tongue. This is an old one, with the offense being registered in 1994. Some say it was a joke, but the school’s brass decided not to take any chances, and got rid of that sexy little curl.  OK, now you’re ready for the tough one:

#4,  from the University of Denver: 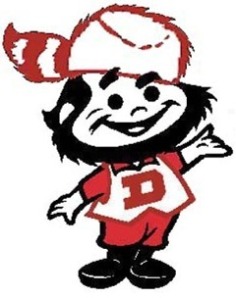 I know, I think he’s kinda cute too. But he’s been officially banned, while the school looks for a logo that is less offensive to well, someone. Chancellor Robert Coombe says that “Boone [“Denver Boone” is the little guy’s name] was a polarizing figure that did not reflect the growing diversity of the UD community, but rather was an image that many women, persons of color, international students and faculty members found difficult to relate to as defining the pioneering spirit.”

It’s clear that eventually all school logos, mascots and nicknames will have to go in the spirit of political correctness and to avoid offending anyone at all. Native Americans are degrading, ethnic figures are controversial, cartoons are stereotypes, some animals are examples of species chauvinism, others are too frightening and symbolize rape, warriors celebrate violence, men exclude women, whites exclude blacks,  pioneers and explorers suggest the rape of the natural world, any real historical figure undoubtedly did something, said something or excluded someone that constitutes an eternal offense,  and anything with a dome, a point or that constitutes a straight line is too much like a penis, also unsettling feminists.

Of course, the real problem is the unethically lazy and irresponsible administrators who always follow the path of least resistance, and allow these kind of power plays—for that’s all they are—to turn campuses paranoid and create student equivalents of the accusing girls in the Salem witch trials, who terrorize all with the threat that they may level an accusing finger and cry, “Sexist! Racist! Insensitive! Offensive!” These logo wars are how our institutions of higher education train the next generation of censors, race-baiters, fear-mongers and political correctness bullies to be our children’s teachers and our elected leaders.

49 thoughts on “Logo Ethics: How Insane Is Campus Political Correctness? A Quiz”