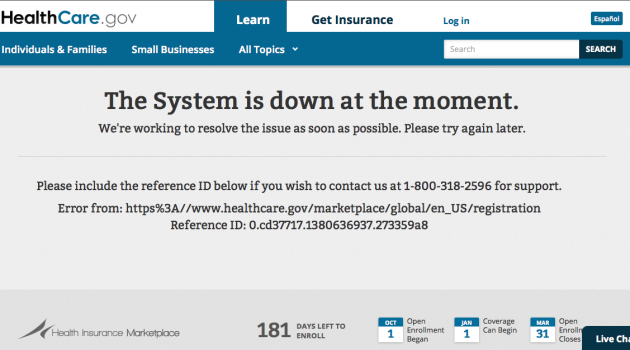 Ezra Klein is a relentlessly progressive Washington Post reporter. He’s obviously also a smart guy, and it is a shame that he has allowed his total immersion into pro-Democratic politics render him incapable of seeing current events in  anything but political combat terms. But that is what he has become, and as a result, his analysis of any issue must be considered pre-poisoned by the lack of any objectivity, and a rooting interest in “his side.”

Here is an instructive paragraph from his Post blog, in a post that was also re-written slightly as a column this weekend. He was nominally criticizing the Obama Administration’s Affordable Care Act website:

But the Obama administration did itself — and the millions of people who wanted to explore signing up — a terrible disservice by building a Web site that, four days into launch, is still unusable for most Americans. They knew that the only way to quiet the law’s critics was to implement it effectively. And building a working e-commerce Web site is not an impossible task, even with the added challenges of getting various government data services to talk to each other. Instead, the Obama administration gave critics arguing that the law isn’t ready for primetime more ammunition for their case.

No, Ezra, the disservice wasn’t that the incompetent website didn’t quiet the law’s critics. The disservice was that the Administration wasted hours of hopeful citizens’ time when they, for some inexplicable reason, still trusted the government to be able to deliver on our President’s grandiose rhetoric, and discovered that after three years of preparation, Obamacare still wasn’t ready, and, if they are of an analytical bent rather than blind worshipers at the throne of Big Government (like you), they might also have been given good cause to wonder whether placing the government in charge of core private decisions like whether or not to have health insurance is such a good idea after all.

All Klein can see is that this is a setback for his side in the political wars, that a party that says that the government is too big and  isn’t capable of taking over one-sixth of the economy without making a mess of it wasn’t put in its place by a shining performance. That’s why he wants the website to work? How about wanting it to work because the law promised to make things better, not lead Americans to online, Soviet-style queues, excuses and frustration?

Klien’s article is pure spin, when what is needed, by the President as well as the public, is for him to join the critics, not just of the website but of the government that produced it. Rather than bemoaning the fact that his ideological foes’ criticism will be seen as having been validated, why doesn’t he concede that based on the evidence so far, they may have a point? That’s what any objective observer would do, if there is such a thing in D.C.  Ah, but a true loyalist can’t speak the truth while the team is in trouble. Here’s the non-spinning journalist take on last week’s fiasco, by CNN’s Wolf Blitzer:

“An embarrassment for the administration, Hopefully, they’ll get all those glitches out of the way by Monday, if possible. They’ve only had three years to get ready for this roll out.”

Not unfair, not political, just factual: an embarrassment, and there’s no excuse for it.

Klein, of course, argues that there is an excuse, and it’s a good thing, when you think about it: the website collapsed because demand was higher than the the administration anticipated. See, you stupid conservatives? People want Obamacare after all!!! That is not the takeaway from this, and no trustworthy pundit should pretend it is. The takeaway is apparent in the Saturday Night Live query: How can you claim millions of Americans don’t have  health care and be surprised that millions of Americans don’t have health care? The takeaway is that poor planning and execution of the roll-out of a massive, expensive and life-altering health care program requires care, expertise, planning and competence, and the early indications are that the government is not up to the task, as opponents of the law have been saying all along. That should be a concern to everyone, not just critics, and supporters of the law should be thinking more than “Oh, no! Now critics have ammunition!”  They should be thinking–“Oh, oh. Maybe we don’t know what we’re doing after all.”

Klein, as I said earlier, is a smart guy. His progressive orientation should inform his analysis and opinion,  not dictate it; it should give him perspective, not blindness. When analysis turns into partisan spin, it is neither journalism nor punditry, but dubious advocacy, and we get too much of that already.