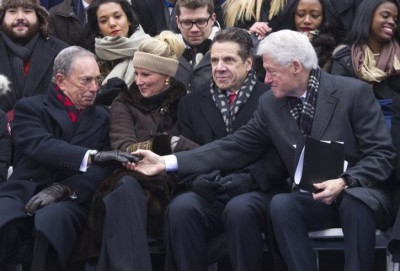 A couple of initial observations on an ironic first Ethics Hero for 2014:

The speakers lined up for  Mayor Bill  de Blasio’s inauguration’s made one wonder if being rude, arrogant and confrontational is a mandatory qualification for being a New York progressive. Though such ceremonies are supposed to celebrate the orderly transfer of power in a democracy and establish a foundation of unity in a city, state or nation before the fur starts to fly, de Blasio’s hand-picked celebrants decided instead to engage in over-the-top revolutionary rhetoric, divisive hyperbole, and attacks on the outgoing mayor, Michael Bloomberg. Chaplain Rev. Fred Lucas Jr compared the city to a “plantation” in the invocation, suggesting that New York City perpetuated the equivalent of slavery.  Former calypso singer and actor Harry Belafonte, who has morphed into a bitter and angry old man in his twilight years, then described the city in cartoonish terms, divided between the oppressed and the 1% oppressors.

Belafonte called the American justice system “deeply Dickensian,” which means either that he is remarkably ignorant of Victorian England’s realities, has never read “Dombey and Son,” or is just intentionally misrepresenting reality.  He ludicrously spoke about crowded prisons, as if that wasn’t a non sequitur in a city where the incarceration rate is 30% below the nation’s while falling 36% over the past decade. Then Belafonte promised that Mayor de Blasio “would not let this city remain a community divided.” How he can do that without stopping his supporters from using outright lies to divide it further, the “Banana Boat Song” minstrel didn’t say. De Blasio’s new public advocate, Letitia James, directly attacked the record and governing philosophy of Mayor  Bloomberg, and  demanded a government “that cares more about a child going hungry than a new stadium or a new tax credit for a luxury development.” This is called, in logical fallacy circles, “the false choice” error.

It was all too much for the rational, the reasonable, and the fair. One paper and pundit after another pronounced the nasty proceedings a blight on New York politics. Even the uber-partisan New York Times was revolted, condemning de Blasio’s speakers (some defenders actually suggested that he had no idea what they were going to say. Sure.) for “marring the event with backward-looking speeches both graceless and smug.” “Mr. Bloomberg had his mistakes and failures, but he was not a cartoon Gilded Age villain,” wrote the Times in an editorial. “He deserved better than pointless and tacky haranguing from speakers eager to parrot Mr. de Blasio’s campaign theme.”

Finally the ex-President spoke, the main event besides the mayor himself. Clinton knows that using inaugurations as opportunities to bash the outgoing government  is a bad and amateurish habit of unstable states and Marxist revolutionaries, and that such arrogant thinking has taken root too deeply in the highest reaches of  U.S. power of late, contributing to gridlock and the politics of division and hatred. New York City is probably in for a lot of that from now on, based on the gang de Blasio unveiled, but for one day, at least, a better statesman tried to restore mutual respect and dignity to the proceedings, reputedly adding some or all of the following on the spot:

“I also want to thank Mayor Bloomberg, who has committed so much of his life to this city. He leaves this city stronger and healthier than he found it. More people are coming here than leaving,” Clinton said. “With all of our challenges, people know somehow deep down inside there’s something special about New York. So, I’m grateful to both mayors — Mayor Bloomberg for his years of service, and for the legacy he will leave, and to Mayor de Blasio for his good and caring hands.”

Thank you, President Clinton, on behalf of Mayor Bloomberg, New York City, and what used to be the traditions of honorable government. New York voters appear to have inflicted on themselves ta reign of the righteously indignant, who intend to govern by exaggeration, division, demonizing and extremism. As for Mayor de Blasio, we’ll see if he can leave “this city stronger and healthier than he found it.”