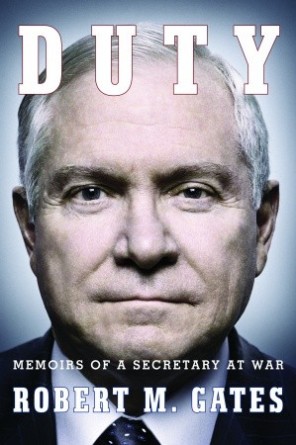 When General George Marshall, World War Two military leader, former Secretary of State, and architect of the Marshall plan, was offered a million dollars to write his memoirs in the 1950s, he demurred, saying that there was no way he could write a truthful memoir without undermining people still at work in the government and military.

And then there was David Stockman…Paul O’Neill

Bottom line: these people betray their colleagues for money, and often, as is Robert Gates’s case, out of spite. Former Defense Secretary Gates, like the others, was given an opportunity to serve his country in a high executive branch position. He was privy to policy discussions and the inner workings of the administration. He was trusted. To reveal details of his tenure while the administration he worked for is still in office, done in a way designed to provoke criticism and embarrass his former associates and boss, is the height of disloyalty, and a breach of implicit confidentiality.

The honorable and ethical way to write such a book would be to wait until it could not actively interfere with the work of the Executive Branch. The people may have a right to know, but they do not have a right to know everything immediately. People in high policy-making positions must be able to be themselves, express opinions, and have productive meetings with the confidence that those they work with are not collecting notes for a future Book-of-the-Month sellout. Books like Gates’s undermine that trust, make it more difficult to get candid and controversial opinions and ideas into the decision-making process, and ultimately hurt all of us. The former  Secretary and those who appreciate the additional ammunition for administration-bashing can assemble a lot of rationalizations for the  book, but they all boil down to “Everybody Does It,” the most threadbare and cowardly rationalization of all.

The ethical thing would have been for Gates to write the book in a few years, or not to write it at all. The ethical conduct for the reading public is to discourage betrayals, no matter who is the one betrayed, by sending such books to the remainders bin.

I suppose I should mention that except for the substitution of Robert Gates’ name for that of Paul O’Neill, and replacing “Treasury” with “Defense,” every word above was written in 2004, when I condemned the sell-out of fired Bush Treasury Secretary O’Neill, who had just provided the information used in a Bush-bashing tell-all called “The Price of Loyalty: The Education of Paul O’Neill.” (Yes, the old Ethics Scoreboard is coming in handy today.) Every word applies with equal force to the new memoir by Gates, who was President Obama’s Secretary of Defense and whose current tell-all attack has set Washington buzzing, except that Gates’s conduct is ethically far worse. O’Neill was a loose cannon and amateur in government: he was a poor appointment, and while his book was a betrayal and unprofessional, he shouldn’t have been trusted in the first place. Gates, in contrast, is a consummate professional who has served many Presidents, and such a book coming from him is shocking. He must know, or have once believed, that Marshall was right. It is being said that this is the first time any former Cabinet member of Gates’ status has attacked his former superiors while they were still in office, and that is nothing for Robert Gates to be proud of. It is shameful. It is especially shameful because, based on the excerpts that have been released so far, it seems that the book was at least in part motivated by frustration and anger. Those emotions may be justified, but they can not in turn excuse breaching the trust of the President of the United States and damaging the  presidency that Gates once pledged to serve.

A few final observations that I did not or could not consider in 2004:

46 thoughts on “Betrayal: Robert Gates Gets Even”