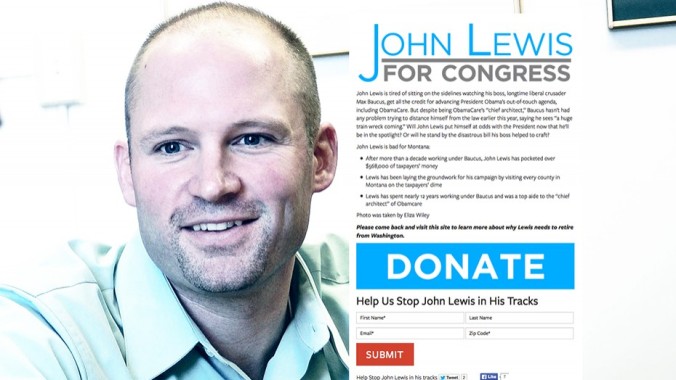 I owe an apology to Michael Steele, the ethically clueless, dim-bulb predecessor to Reince Priebus as Chairman of the Republican National Committee. Still nauseous from Steele’s despicable 2010 fake census mailing fundraising scam, I referred to Priebus era deceptions like employing misleading editing of excerpts from Solicitor General Donald Verrilli’s defense of the Affordable Care Act before the Supreme Court, and sending out solicitations for donations that look like overdue bill notices as examples of “the Curse of Michael Steele.”  I’m beginning to think, however, that Steele wasn’t the problem, and that it was he who was infected by the unethical instincts of the GOP, rather than the other way around.

The Tampa Bay Times recently reported on the experience of citizen Ray Bellamy, who wanted to make a political contribution to Alex Sink, a Democrat running for Congress in Florida.  A Google located “http://contribute.sinkforcongress2014.com,&#8221; and sure enough, there was a large photo of Sink and the trappings of a campaign site. Assuming he was at the correct destination and without reading the text, Bellamy clicked on a button at the bottom of the page, sending $250 to Sink’s campaign, or so he thought. But the button was under the words, “Make a contribution today to help defeat Alex Sink and candidates like her,” which Bellamy also didn’t read. He felt he had been tricked. He had.

This isn’t a case of inadvertent bad design, like the infamous “butterfly ballot” that led some inattentive Florida Democrats to vote for Pat Buchanan instead of Al Gore, and helping to make the 2000 election the unholy mess that it was. No, it appears that such misleading website addresses luring Democratic voters to anti-Democrat sites are an intentional, national strategy that is happily, proudly and shamelessly being employed by Priebus’s Republican National Committee and its cousin, the Republican National Congressional Committee. The curse is all his now.

The political organization has purchased over a dozen domain names of Democratic candidates up for election and set up sites to attract misdirected donations like the one that fooled Ray Bellamy. The NRCC stands by the tactic and mocks Democrats for failing to grab up Internet real estate important to the party’s candidates.  It is making no aplogies. “Democrats are behind the game in digital,” NRCC spokeswoman Andrea Bozek told Time. “They should be buying the URLs for their candidates. I think that’s a pretty basic campaign tactic.” She said the NRCC has been promoting such sites for the past year and intends to roll out more of them as the midterm elections approach, while also buying up domain names for Republican candidates so Democrats can’t play the same slimy game. “Democrats are clearly pitching stories on these effective websites because they are worried about voters learning the truth about their candidates’ disastrous records,” Bozek told NBC.  “Anyone who reads the website understand these are negative attacks. Also as required our disclaimer is at the bottom.”

The various media stories about the ploy interview various experts about whether it is illegal or not. It doesn’t matter. The trick is dishonest and designed to fool people, and a party that intentionally fools people and says, as Bozek does, “I think that’s a pretty basic campaign tactic” has told the American public all it needs to know. We will trick you. We will fool you. Don’t believe what you think we have said, and don’t expect us to make it easy for you to know what we are doing. We will do anything to win. We don’t care about ethics, or fairness, or transparency, and you cannot trust us.

I agree that the media descriptions of the websites as “fake” is a blatant, partisan-planted exaggeration. Here’s one of the sites; here is another. Using the candidate’s name in the URL is deceptive and wrong, but come on: the text “Fed up with [Democrat Congress member’s name]?  Sign up today”, is

and hardly hidden from view. Nor does the text immediately under the large campaign logos like this…

…hide its intent or disguise it in any way. Under the Kirkpatrick logo, for example, the site says,

A career politician and insider, Kirkpatrick was booted out of Congress by Arizonans in 2010 after she sided with Nancy Pelosi and supported ObamaCare. But in 2012, she managed to return after Pelosi’s allies came to her rescue with millions of dollars. That probably explains why Kirkpatrick continues to be in Pelosi’s back pocket.

Kirkpatrick is a huge embarrassment to Arizona. How?

This is not what can be fairly called “fine print.” It’s not a fake pro-Kirkpatrick website, it’s an anti-Kirkpatrick site that only would seem otherwise to the careless and the foolish who only read headings before giving away their money.  Even in the similar anti-John Lewis site that heads this post, which is reproduced considerably smaller than the actual graphics, so much so that most of the text is unreadable, the bolded words “Help us stop John Lewis in his tracks” are difficult to miss. The fake URLs, however, are intentionally deceptive and an undeniable dirty trick, which is bad enough. The tactic is designed to draw the careless and the foolish, who are legion, and who are the natural targets of most political communications.  When NBC asked Bozek whether the website was potentially confusing to a potential donor seeking to support a Democratic candidate for Congress,  she said: “I think we give voters a little more credit than that.” That’s a lie. Both party treat voters as if they are gullible idiots, because enough of them are to swing elections.

I don’t trust parties who make it clear that they will use deceit to mislead voters and then argue that “it’s a pretty basic campaign tactic.” Such a party cannot effectively criticize, for example, an intentionally misleading pledge designed to promote health care legislation that “if you like your current plan, you can keep it. Period,” as a lie—which it is—because such lies are also “pretty basic campaign tactics.” If Republicans will deceive the public to win elections, they will deceive the public once they are in office. Buying up opponents’ likely web addresses so their supporters will go to the wrong websites seems like a small deceit, but those who engage in small deceits for small pay-offs are always likely to move on to greater deceits for larger pay-offs. If this is how the Republican Party wants to present itself, make no mistake what it means:

You can’t trust Republicans, because if they can trick you and get away with it, they will.

31 thoughts on “The Republican Pattern Of Deceitful Tactics: Can This Party Be Trusted? No.”