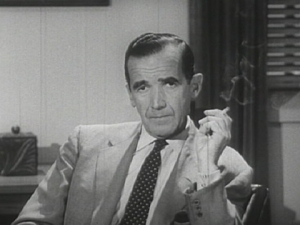 At last report, rolling in his grave…

I believe that the field of journalism ethics has been negated, as the news media now routinely ignores the most obvious conflicts of interest, and make no effort  to avoid them, address them, or disclose them.

Hamas has published media guidelines instructing Gazans to always refer to the dead as “innocent civilians” and to never post pictures of armed Palestinians on social media. Hamas has prevented foreign reporters from leaving the area, and it is easy to see how foriegn journalists would conclude that the best way to ensure their safety is to avoid angering their “hosts.” Seemingly mindful of these concerns, the New York Times’ reporting on the Gaza conflict from Israel depicts tanks, soldiers, and attack helicopters, while virtually all images from Gaza are of dead children, weeping parents, bloody civilians, ruined buildings, overflowing hospitals, or similar images of pain, carnage and anguish. As Noah Pollack noted in the Weekly Standard website,  a Times photo essay today contains these images:

“…three of Gaza civilians in distress; one of a smoke plume rising over Gaza; and three of the IDF, including tanks and attack helicopters. The message is simple and clear: the IDF is attacking Gaza and harming Palestinian civilians. There are no images of Israelis under rocket attack, no images of grieving Israeli families and damaged Israeli buildings, no images of Hamas fighters or rocket attacks on Israel, no images of the RPG’s and machine guns recovered from attempted Hamas tunnel infiltrations into Israel.”

Is this just naked anti-Israel bias, or is the Times simply trying to report the story without getting its reporters’ into further peril? I’ll be charitable and presume the latter: fine. But that defines a clear conflict of interest that mars the objectivity of the Times’ reporting, and the paper has an ethical obligation, under its own guidelines, to disclose it in every report where it might be relevant.

After Newsbusters pointed out to its readers that The Washington Post published a story on anti-Israel protests written by a virulently anti-Israel graduate student named Britain Eakin, the Post admitted that it had assigned her without realizing that she had a conflict of interest, posting this:

EDITOR’S NOTE: The Post covered a protest outside the State Department on July 20 against U.S. policy in the Middle East and Israel’s actions in Gaza. One reporter sent to cover the protest, Britain Eakin, is an intern who has written opinion pieces elsewhere that sharply criticize Israel in the conflict. The Post should not have sent her to cover the protest and, had it known of her writings, would not have done so.

Newsbusters, flushed with success, gratuitously praised the Post for admitting its error. I won’t. Finding Eakin’s writings as easy as checking her Twitter feed, where her anti-Israeli and pro-Hamas editiorials for al-Jazeera America and the website Counterpunch were linked.  Doesn’t the Post have a conflicts check procedure when it assigns new reporters? Does it provide any guidelines or training on conflicts at all? Is Eakin still being employed by the Post, after undermining its credibility by not disclosing her biases? Or was the Post just caught doing what it does routinely—assigning reporters with political and ideological agendas, and engaging in damage control?

The “Seinfeld” episode where George Costanza tries to brass through being confronted by his boss for having sex on his desk with the office cleaning woman comes to mind in situations like this. “Was that wrong?,” George asks, as if this was a gray area. “Should I not have done that?” Admittedly, the “news organization” in question is MSNBC, a journalistic ethics free zone, but even so: on a recent edition of his MSNBC show, Jose Diaz-Balart was broadcasting from the National Council of La Raza’s (NCLR) conference in Los Angeles. He hosted an illegal immigrant activist and favorably responded to her calls for the legalization and citizenship, and used his program to support the NCLR agenda. He never mentioned that he was being given  a special award at that very conference, the Ruben Salazar Award for Communication, given “each year to an outstanding communications professional dedicated to portraying news relevant to US Hispanics.” At one point a guest spilled the beans (no ethnic slur intended) by congratulating him; even then, he didn’t explicitly explain what was going on. Was this because he knew he had an undisclosed conflict?

When major members of a profession are routinely disregarding the professional’s duties to avoid conflicts of interest and to disclose all potential conflicts, there is rebuttable presumption that such a profession is no longer a profession at all. U.S. journalism’s conduct is making that presumption difficult to rebut.

55 thoughts on “State Of U.S. Journalism: “Conflict of Interest? Oh, THAT Old Thing!””