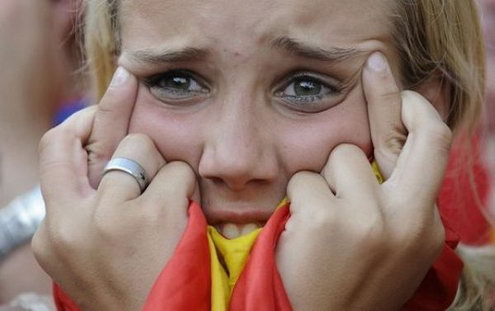 The simple answer to the question in the headline is: we should all want the truth to come out, whatever it is, and be dealt with honestly and justly. I don’t think that result is possible, unfortunately, just as it proved impossible in the Martin-Zimmerman tragedy.If the truth could be determined, however…if an experimental, advanced video recorder just happened to capture everything that occurred between Officer Wilson and Mike Brown, including in the squad car; if it captured the incident from all angles, and we could hear and see everything that transpired between them, what would we want that to be, recognizing that the tragedy cannot be undone?

Would we want it to show that Mike Brown was murdered, that he was fleeing for his life when he escaped the car, then turned, fell to his knees ( as at least one witness claims) and was gunned down with his hands in the air? Obviously many Americans, including Brown’s family, the Ferguson protestors, many African-Americans, civil rights activists, police critics, politicians and pundits, have an interest in seeing this be the final verdict of investigators, for a multitude of reasons. The grieving family wants their son to be proven innocent of any fault in his own death. Others, especially those who prematurely declared Officer Wilson of guilty of “executing” Brown, have a strong interest in being proven right, for even though it would not excuse their unfair and irresponsible rush to judgment, such a determination would greatly reduce the intensity of criticism leveled at them.

[Side Note on Ethics Dunce Jay Nixon: That won’t stop the criticism here, however: Whatever the facts prove to be,  Gov. Jay Nixon’s comments are indefensible, and inexcusable. Now the Democrat is denying that they meant what he clearly meant to convey: calling for “justice for Brown’s family” and a “vigorous prosecution” can only mean charging Wilson, and that is what those calling for Wilson to be arrested took his comments to mean. If the Governor didn’t mean that, as he now claims, then he is 1) an ignoramus and 2) beyond incompetent to recklessly comment on an emotion-charged crisis in his state without choosing his words carefully.]

Or should we hope that the facts exonerate Wilson? After all, shouldn’t we want the one living participant in this tragedy to be able to have some semblance of a life without being forever associated with villainy? Certainly his family and friends, as well as member of the Ferguson police force who want their own ranks to be vindicated, and police all over the nation who have had their profession attacked and denigrated in the wake of the shooting, fervently hope that the narrative pushed by the demonstrators is proven wrong. Others want to see Wilson proven innocent for less admirable reasons. They want to use the incident to condemn police critics, and undermine and discredit civil rights advocates, especially long-time ideological foes like Al Sharpton. They want Eric Holder to look biased, (he looks biased anyway, because he appears to be taking sides) and to make the case—one that a single episode neither supports nor can possible rebut—that police do not have itchy trigger fingers when their weapons are pointed at young black men.

From the standpoint of ethics, which means that the best outcome will be the one that does the most good for society, the choice is complex.

The proof that Wilson gunned down Brown without justification would focus needed attention on police procedures and the perilous level of distrust between black communities and law enforcement. This can only be a beneficial result. Yet it will also serve to vindicate what should never be acceptable, the knee-jerk assumption that Wilson, because he was white, killed Brown because he was black. Even if the facts unquestionably prove homicide, that assumption remains unjust and wrong. Yet the demonstrators and the race-hucksters will cite them as proof of not just Wilson’s racism, but police racism and indeed pervasive white racism. Wilson’s guilt will give political propellant to those who profit from portraying the United States as a racist society where blacks are endangered simply by walking down the street.

If the facts show that Wilson was innocent, and fired his gun in reasonable fear for his safety, there is one obvious result than no one should find objectionable: it will mean that Wilson can escape punishment for something he didn’t do, despite an organized national effort to make him the scapegoat for Brown’s death. It will also focus attention on the reckless, shameful and cynical race-grievance industry, which chooses incidents like the Trayvon Martin shooting or the Ferguson incident as a platform for political posturing, making up narratives that serve their ends with little concern for truth or collateral damage. Being proven wrong may lead some journalists and pundits to be more careful the next time. It will make some fools, like Governor Nixon, Washington Post columnist Eugene Robinson, and professional bigoted ass Spike Lee look like the fools they are.

But Wilson’s exoneration will also allow an obviously insensitive and incompetent police department to avoid the policy and attitudinal overhaul it so obviously needs. It will allow a festering distrust between the black community and police to be knocked far down the list of national priorities, ensuring more police shooting deaths until, inevitably, one or more are  proven to be a racist executions. It will embolden racists, and by immediately casting the demonstrators as trouble-makers and vandals, undermining the sincerity and legitimacy of their civil rights concerns.

My greatest fear, however, is that even if the facts prove Wilson innocent, political pressure from the same unscrupulous activists who continue to state as fact that Trayvon Martin was profiled, stalked and murdered will persuade prosecutors and perhaps even the Justice Department to persecute Wilson and mollify “the base” by making him endure the ordeal a criminal prosecution, as “justice” for Michael Brown.

I am torn and conflicted.

What do you wish the evidence would show?

14 thoughts on “Wishing Ethics: What Should We WANT The Outcome To Be In Ferguson?”