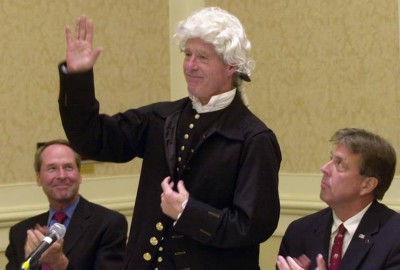 Now that’s who you want defending you in your capital murder trial..Thomas Jeffer..wait, WHAT???

Dennis Hawver, an Ozawkie, Kansas attorney, was disbarred last week by the Kansas Supreme Court. The court ruled that Hawver showed “inexplicable incompetence” as a defense attorney for Phillip Cheatham, charged with first degree murder and tried in a 2005.  Cheatham’s conviction was overturned and  a new trial was ordered  in 2013, on the grounds that Hawver did not provide an adequate defense and thus Cheatham did not receive a fair trial. Yes, I think that was a fair assessment, given that..

He really impressed the Supreme Court in his disciplinary hearing, though. He appeared dressed as Thomas Jefferson–his hero, he said—and  testified that his client agreed to pay him the $50,000 fee only if jurors returned a not guilty verdict—an arrangement forbidden by the ethics rules.  At one point,Hawlor shouted at the three judge panel, “I am incompetent!” as he pounded the lectern.

Taking him as his word, they  voted unanimously to disbar him, stating in their opinion that the totality of evidence leads to a “virtually inescapable conclusion” that Hawver failed to meet his professional ethics obligations while representing Cheatham, specifically citing his “inexplicable incompetence.”

19 thoughts on “Now THIS Is An Incompetent Lawyer”