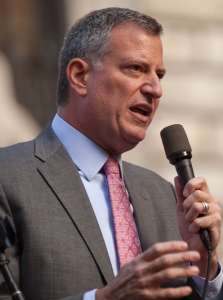 Integrity and leadership are not the same thing, Mayor…

New York City Mayor Bill de Blasio’s relations with his own police force could not be worse, and this is not in the best interest of the citizens both the mayor and the police are duty-bound to serve. Can the rift be repaired?

This week de Blasio ruled out one avenue of peace: he said he would not apologize for his remarks following the Eric Garner grand jury decision not to bring charges against the officer who appeared to precipitate the unarmed black man’s death by using a choke-hold. The mayor said…

“You can’t apologize for your fundamental beliefs. The things that I have said were based on my beliefs, the truth as I know it. Can we do a better job communicating, and listening, and deepening an understanding of what our officers need? Yes.”

I can’t think of a better example of a dilemma where the most ethical conduct is still irresponsible leadership, and thus, from the perspective of a leader’s obligations, unethical.

From an isolated perspective, de Blasio is asserting his integrity. “I could apologize and help smooth over my toxic relationship with the police, but that would require me to be insincere, and I’m not going to do that,” he is saying. He is saying that his constituents can trust him to be straight and honest, and if that means that he must pay a political price, he will pay it. This is admirable, on a human level. Praiseworthy…in a vacuum.

De Blasio, however, doesn’t have the luxury of being ethical in a vacuum. He is the mayor of a city with a lot of problems, controversies, obstacles to effective governance and people in need. The context of all of his words and actions must be his duties to address those issues, and his integrity, in this case, must be subordinate to getting the job he was elected to do done.

What de Blasio just did was to stand by his statement that he believed the New York police were sufficiently racist and untrustworthy that he worried about the safety of his dark-skinned, bi-racial son. He had said this:

“…Chirlane and I have had to talk to Dante for years about the dangers that he may face. A good young man, law-abiding young man who would never think to do anything wrong. And yet, because of a history that still hangs over us, the dangers he may face, we’ve had to literally train him—as families have all over this city for decades—in how to take special care in any encounter he has with the police officers who are there to protect him. And that painful sense of contradiction that our young people see first, that our police are here to protect us, and we honor that, and at the same time, there’s a history we have to overcome, because for so many of our young people, there’s a fear. And for so many of our families, there’s a fear. So I’ve had to worry over the years. Chirlane’s had to worry. Is Dante safe each night? There are so many families in this city who feel that each and every night. Is my child safe? And not just from some of the painful realities—crime and violence in some of our neighborhoods—but is safe from the very people they want to have faith in as their protectors. That’s the reality.”

“That’s the reality.” ‘My police force is sufficiently stocked with racists that I am in fear for the life of my son,” is what this statement says, or seems to say to his police. Not only that, but in the context of when the statement was made, de Blasio was suggesting that the specific officers involved in Garner’s death were racist as well…that Garner died because he was black. De Blasio’s latest statement doubles down, and says that this is the “truth as he knows it.“

That’s fine. But if I am a New York police officer, I now know that my ultimate supervisor and the city’s leader does not trust me, or my colleagues. I know that in a controversy where the facts are not certain, the leader of the city will gravitate to the position that I, or my colleagues, are in the wrong. That means that the mayor does not trust me, and thus I cannot trust the mayor.

Leadership must embody basic ethical values, but it has its own alignment of those values as well. Ethical conflicts abound and are endemic to the task, which means that there are situations where any position means violating one ethical value or another. Absolutism does not work for leaders. Indeed, the difference between a good—and that means effective–leader and a bad one–as in “can’t lead”—often is knowing when to compromise principles, when to be dishonest, unfair, unkind, or harsh, and when to sacrifice pride and personal ideals in order to be accountable, responsible, and competent. If a leader’s devotion to an ethical principle causes his or her ability to lead effectively to be significantly diminished, then that leader has an ethical obligation to do something else for a living.

Reading the comments in various websites discussing this story, I see frequent sentiment like this one, from a commenter called “Sundae Sky”:

“That is excellent. Never apologize for your beliefs; you owe them nothing. Other than the materials they are asking for to do their jobs.”

This is a common misconception among those who have never led an organization or who do it badly. You owe the organization, city, group, nation, team, army or country you are trusted to lead whatever is necessary to get the job done well. If that means humbling yourself and retracting a statement that you may believe but never should have said out loud, then you do it, have an obligation to do it, and are ethical to do it. Sky would be lousy mayor too.

De Blasio has chosen his pride and principles over being able to run the city. This tells us that

2. He’s an admirable human being, but can’t be trusted with any job that requires moral and ethical compromise.

3. His administration in New York is doomed to fail, and perhaps catastrophe.

4. Unless he learns and changes, this is a certainty.

If he won’t do what is necessary to be an effective mayor, he should resign.