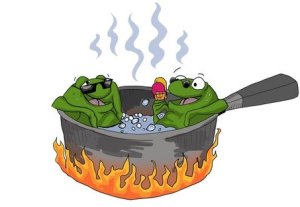 “This is a great community college, you know?”

I’m willing to entertain the notion that the exigencies of the situation may have justified Boston’s police ordering citizens to stay in their homes during the dragnet for the Boston Marathon bombers in 2013, Barely. Still, the explosion of extra-legal, unconstitutional abuses of power by national and state governments during the Presidency of Barack Obama is profoundly troubling, and even more so is the complacency of the public and media when it occurs.

Yes indeed, I see this particularly frightening fish-rot as being initiated from the head in the White House, who has embraced the governing theory that if consensus and compromise on desired measures, laws and policies can’t be achieved under the Constitution’s formula, do it anyway. This isn’t strength, you know. It is weakness, the desperate resort of an unskilled executive with contempt for democracy. Under this administration, we have seen a President and a Justice department refuse to fulfill their duties and defend a duly passed and signed law that they just didn’t like (DOMA). Wrong. We have seen a President unilaterally amend his own sloppy health care law because he knows that if he tried to fix it legally, the Congress would gut it. Wrong. We have seen Obama repeal immigration restrictions by executive order, and declare that the Senate was in recess in order to avoid the bother of getting legally mandated  confirmation of his appointments—that one, at least, was struck down by the Supreme Court.

The cumulative effect of all of this is gradually increasing public tolerance for official breaches of the rule of law, at all levels of government, and by private entities too. I believe that that this threatens the democratic culture, and I do not understand why progressives are not as outraged by this development as moderates and conservatives. Do they really think that having allowed Constitutional protections to erode so their precious agenda can be advanced, those protections will be suddenly vigorous again when their adversaries have the upper hand? What utter, utter fools:

The sickening effect of this complacency was on display at Kirkwood Community College in Monticello, Iowa, where Hillary Clinton spoke yesterday. Students told reporters that the Secret Service locked them in their classrooms as the Democratic presidential candidate arrived.

Campaign organizers explained later that they tried to cause as little disruption as possible. That’s right, as little as possible: just trample on students’ constitutional rights a little bit, because, come on, what’s flagrant and criminal abuse of power among friends?

This is false imprisonment. It is a crime, and it is a tort. The students have viable actions against the college for permitting it, and against the Secret Service for inflicting it. I don’t yearn for the Sixties often, as it was an ugly and culturally destructive time in out history, but at least the cantankerous, political, angry and obstreperous students of that era wouldn’t have squatted silently like sheep as the ruling class locked them in their class rooms. We would have broken the windows. So should those Iowa students. It doesn’t matter that it was “only” for a few minutes. One minute of illegal restraint is too much.

Hillary Clinton isn’t a queen; she isn’t even an elected or appointed official. She has no right to demand, or accept, the imprisonment of U.S. citizens for a second to expedite her convenience. The pattern is now established: Clinton expects to violate conflicts of interest requirements, engage in naked influence peddling, destroy evidence, skirt government transparency and security rules, and now violate basic citizens’ rights as she chooses without any consequences or complaints at all, with the news media standing silent.

Imagine what she will try to get away with if she gets elected.

It is a big deal, dammit. The rule of law is a big deal; civil rights are a big deal. This casual infraction is the embodiment of the metaphor of the frog being boiled to death so slowly that he doesn’t jump out of the pot.

And the frog is us.