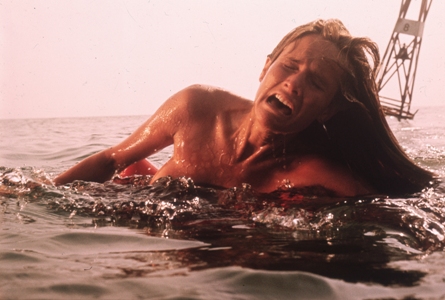 From the Associated Press:

OAK ISLAND, N.C. (AP) — The mayor of a coastal North Carolina town where two young people were severely injured in shark attacks this weekend says she doesn’t think emergency workers had enough time between incidents to close the beaches. A 12-year-old girl was attacked just after 4 p.m. Sunday in Oak Island, and a 16-year-old boy was attacked less than two hours later about two miles away. The girl lost part of her arm and suffered a leg injury. The boy lost his left arm…

Beaches were open for the two-hour stretch Sunday but closed after the second attack.

Oak Island Mayor Betty Wallace told The Associated Press on Monday that she didn’t think that gave workers enough time to decide to close the beach between attacks. …Wallace says that even if the beach had closed after the first attack, the order might not have extended to the area of the second incident.

It was unclear whether the same shark attacked them…

The beaches were open Monday, with a boat and a helicopter patrolling the water.

OK, I know what happens next! The helicopters spot a fin in the water, and there’s a panic on the beach, and it turns out to be two kids with snorkels and a fake shark fin. The younger boy points to his brother and says, “He made me do it!” Meanwhile, the Great White goes over to the lagoon and bites the leg off a guy with a bad fake Boston accent.

If, as I suspect, Mayor Wallace is Amity Mayor Larry Vaughn come to life from “Jaws” and identifying as a woman as well as disguising herself accordingly to get another job as a resort town mayor—which means that she is a woman, of course—then old Larry sure has a flat learning curve. On the other hand, if Mayor Wallace isn’t Larry Vaughn, someone needs to make her watch “Jaws,” quick. Is it unethical—irresponsible, negligent, incompetent— for any Mayor of a coastal town not to be aware of the lessons of that film?

Mayor Wallace has added something to the script, however: maybe it was cut from the movie, like that strange scene with Quint in the music store, and Larry, being an idiot and all, thinks it exonerates him. Now he—sorry, she—is using a moral luck-based rationalization that I hadn’t yet added to the Ethics Alarms Rationalization List. I’m calling it “Convenient Futility,” or “It would have happened anyway.”

Not closing the beaches was irresponsible, whether the second victim could have been spared or not. Clearly, since no actions were taken to close the beaches and no decision was made to take them, the Mayor had decided to ignore this particular problem until it swam up and bit her on the ass!

It was just luck that the second attack happened quickly enough and far away enough that the Mayor could claim that closing the beach wouldn’t have worked. If the attack occurred the next day and was fatal, as in “Jaws,” the Mayor would have no such excuse. That’s moral luck.

It will also be moral luck if the rest of the “Jaws” plot doesn’t come to life from this point on…or if it does. Larry clearly never learns.

I do thank him, er, her, for the new rationalization, however, and here it is. I haven’t yet determined whether it is a sub-rationalization of another one, such as #8. “No Harm, No Foul,” or deserves its own category:

“Convenient Futility,” or “It wouldn’t have mattered if I had done the right thing.”

One of the more pathetic excuses incompetent and negligent individuals try to employ when they have made bad decisions is to argue that a better decision would have not made any difference, so, by implication, it wasn’t such a bad decision after all. It may or may not be the case that the irresponsible or incompetent decision wasn’t the reason for the related harm, but that is just moral luck. The decision was wrong when it was made, and whether it actually caused the damage, harm, or catastrophe because of what the law calls “intervening causation” in no way mitigates the individual’s incompetence.

The rationalization confounds law and ethics. I was once on the jury for a medical negligence lawsuit in which a woman was suing a doctor for causing her to go blind by giving her an incompetent diagnosis. The doctor’s defense was that she would have lost her sight anyway because she didn’t follow the treatment prescribed by another doctor. That defense worked: he wasn’t legally responsible for her blindness due to an intervening cause. Nevertheless, the doctor was still an incompetent, dangerous doctor. He was just lucky that his ineptitude didn’t blind her.

“It wouldn’t have mattered because the same thing would have happened even if I was competent” is still an admission of incompetence.

7 thoughts on ““Jaws” Ethics: A Real Life Larry Vaughn Models Rationalization #49, “It Would Have Happened Anyway””