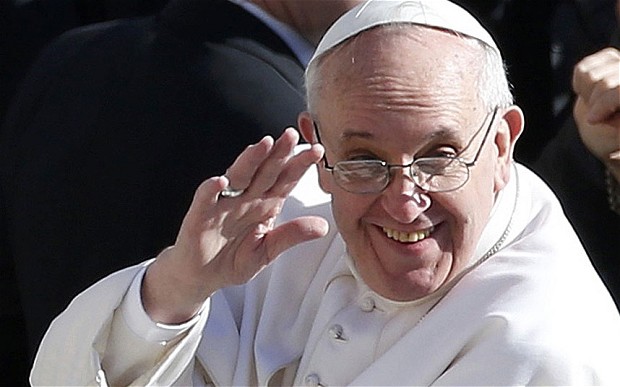 The absurdity of the U.S. media doing backflips over the Pope while the largely godless progressive movement momentarily treats a religious leader as if he is the authority on all things was magnified by the Pope’s remarks to Congress yesterday, which you can read, if you have time on your hands, here.  One example will suffice, or at least one is all I have time and stomach for.

The Pope called for open borders, specifically in the U.S:

“On this continent, too, thousands of persons are led to travel north in search of a better life for themselves and for their loved ones, in search of greater opportunities. Is this not what we want for our own children? We must not be taken aback by their numbers, but rather view them as persons, seeing their faces and listening to their stories, trying to respond as best we can to their situation. Let us remember the Golden Rule: ‘Do unto others as you would have them do unto you.’ This rule points us in a clear direction. Let us treat others with the same passion and compassion with which we want to be treated. Let us seek for others the same possibilities which we seek for ourselves. Let us help others to grow, as we would like to be helped ourselves.”

To begin with, this is ethically and politically simple-minded: no serious ethicist believes that reciprocity works as an ethical system in all circumstances, and one  of those circumstances  in which serious people recognize it does not is governing nations. Sounds nice, though, doesn’t it? But never mind. Never mind also that a nation built on ideals, traditions, cultural norms, and an acceptance of common values cannot take in unlimited people unfamiliar with and unsympathetic to these core cultural elements and survive. The issue, for now, is hypocrisy.

The Pope’s own domain, Vatican City, a sovereign political entity, has millions of visitors a year but allows only those who meet strict criteria to be residents or citizens. According to a 2012 study by the Library of Congress, about 450 of its approximately 800 residents have achieved citizenship . Citizenship is limited to church cardinals who reside in the Vatican, the Holy See’s diplomats, and those who have to reside in the city because of their jobs, such as the Swiss Guard. Spouses and children who live in the city because of their relationship with citizens,  including the Swiss Guard, are also granted citizenship. Very few of the Vatican’s citizens are women.

Applying the Pope’s supposed principles that he lectured the Congress about yesterday, he should be allowing hundreds of thousands of Syrian refugees, and, if they choose, Mexican immigrants, to join the happy few in his domain. Of course, he won’t, because he isn’t insane. His apologists will argue that the Vatican is different, that it can’t open its doors because the result would be chaos, and the Vatican wouldn’t be the Vatican if it did.

This is also true of the United States, but The Golden Rule notwithstanding, the Pope doesn’t really care about that. He cares about talking in broad generalities divorced from political, financial and demographic realities, resulting in utter hypocrisy, and the cynical partisans using his hypocritical remarks to support their own irresponsible policies exploit it.

Pope Francis is the Hypocrite of the Year.

52 thoughts on “Yes, The Pope Is A Hypocrite”