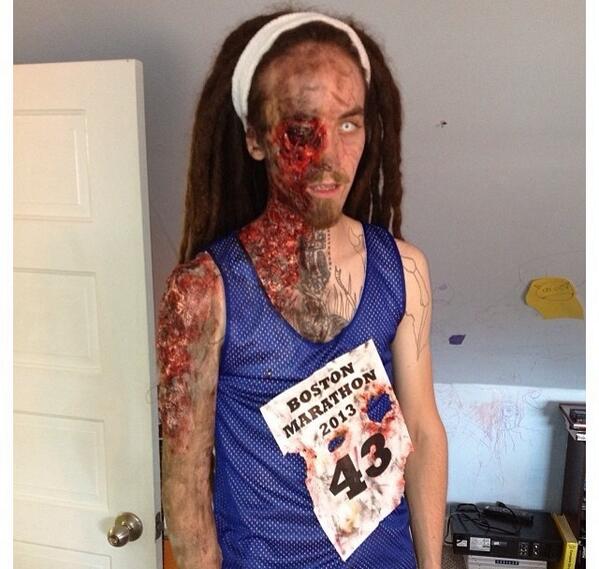 The standards of acceptable Halloween costuming, as you might have predicted given the catalyst President Obama has given to extreme restrictive political correctness, keeps evolving to the hypersensitive and the restrictive. The issue is easier with children’s costumes: children’s masquerades should be age-appropriate; they should not be manikins for their parent’s senses of humor or political views, and as long as they are in the spirit of horror movies, the criticism of those who don’t understand horror movies should be jeered at or ignored. The major controversies arise now over adult costumes. Ethics Alarms has been covering the phenomenon for  awhile: let’s review the topic as previously explored here before I delve into its 2015 edition:

In 2011, I wrote about a law firm that was caught by the New York Times having a Halloween party in which employees and lawyers were encouraged to dress as homeless people. The firm was in the foreclosure business. Ick. But it was still a private party. (A disgruntled employee publicized the photos (Unethical.). Can there be such a thing as a private party today? Good question.) I wrote,

It makes no sense to have a standard requiring private costumes, speech or entertainment to be appropriate for wider exposure. Baum told the press that this year’s party, held last week, raised money for the American Red Cross, and employees were warned they could not wear costumes that “might be interpreted as offensive.” Well, good luck with that. Witch costumes show “an appalling lack of compassion” for the victims of the Salem witch trials. Ghosts show disrespect for the dead. Zombies might be taken the wrong way by the handicapped or mentally challenged. PETA members will say that dressing like Shamu celebrates slavery. Halloween costumes among friends and colleagues should be exempt from public charges of offensiveness by anyone not invited to the party.

In 2013, the issue was the proliferation of black humor-themed costumes for sale, like “Ann Arexia”…. 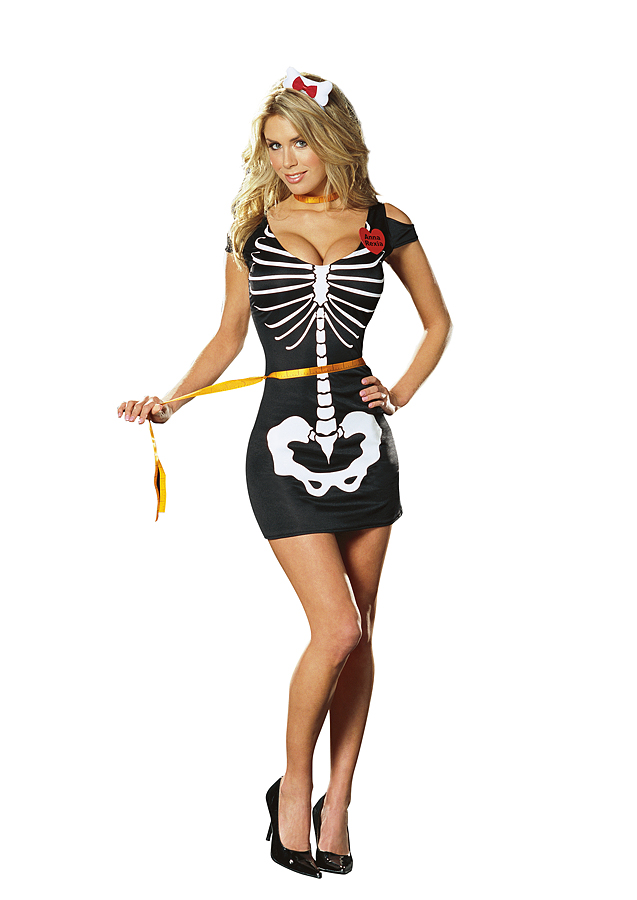 Trivializing death or mocking it is any way is guaranteed to offend somebody. My solution: if it offends you so much, don’t participate in Halloween. Boycott it. Don’t give out candy. Let everyone else—you know, those enough to distinguish reality from make-believe and satire from insults—have a good time once a year….If Halloween is worth keeping—and though I have never been a devotee, I’d say anything in this increasingly grim world that provides escape, amusement and fun is worth hugging and cherishing, not to mention keeping—then the limitations on it should be few, and perhaps none. Almost all of the traditional costumes of Halloweens in saner times were arguably offensive to somebody. Those who had lost loved ones could find the skeletons, zombies and ghosts insensitive to the tragedy of death. Witches are doubly offensive, both as the mockery of a religion, Wicca, and as a trivialization of the tragedy in Salem, Mass.

Pirates still cause death and destruction: what’s amusing about that? Hobos, the old standby that any kid could create with some burnt cork, a stick and a bandana are just poor homeless people…how dare you make fun out of their plight? Princesses are sexist and encourage stereotypes; soldiers celebrate war: think of all the millions who have died! Monsters ridicule the deformed and disabled: we should show compassion for Dr. Frankenstein’s creation, not fear. Dressing as Eyegore or the Hunchback of Notre Dame is obviously cruel and disgusting to all those hunchbacks we see very day. Space Aliens challenge biblical beliefs, good historical figures—Lincoln, Washington–that’s disrespectful; bad ones—Dracula, Henry the Eighth—celebrate evil deeds and cruelty. Athletes? Football celebrates violence and head trauma; baseball steroid use; hockey, more violence; basketball: out-of-wedlock kids. Celebrities? Please. Kim Kardashian? Kanye West? Honey Boo-Boo? How many celebrities aren’t offensive? Most of them offend me. But who wants to dress up as Tom Hanks?

Funny that I should have mentioned Kanye West and the Kardashians.

Heath Morrow, an elementary school teacher at Chestnut Grove Elementary School in Decatur, Alabama, was forced to issue a public apology for dressing up as Kanye West at a private Halloween party. A representative for the school district read the apology at a press conference on Monday. Did he do anything wrong? No. Was it any of the school’s business what costume he chose to wear at a party with no connection to the school? No. This is bullying and political correctness enforcement, and nothing better nor less. Morrow is even being investigated by the school, for what, I cannot imagine. Bad taste in his private life? Bigoted friends? Not liking rap?

Morrow is white, so he had on Kanye make-up. How else was he supposed to dress as Kanye West? The accusation in such episodes is that the make-up is “blackface” as in minstrel shows, which mocked blacks in demeaning fashion but  it obviously was not. As Reason’s blog pointed out:

“Morrow clearly isn’t demeaning black people in general. He isn’t dressed up as a black person; he’s dressed up as Kanye West. And it should be okay to mock Kanye West. He’s a ridiculous celebrity! He’s maybe running for president!”

Even this relatively reasonable blogger, Robby Soave, gets disorient from all the political correctness gas pumped into the air. “Morrow should have neglected to darken his skin in order to avoid accusations of blackface,” he writes. Huh? He should avoid something that isn’t blackface (the word is “make-up”) to avoid accusations of doing what any reasonable and educated person should know he isn’t doing? How do you dress up as a famous black man without being black? The episode could have been used by a school interested in teaching history and critical thinking to explain the difference between make-up and blackface. The school preferred, and apparently so does Reason, to cave to manufactured offense. (See: The Niggardly Principles. Discuss.)

What’s the theory that makes a Kanye West costume unethical? Only blacks can make fun of Kanye West? Can white morons (a.k.a Trump supporters) legitimately object to blacks wearing a Donald Trump costume? How about an Abe Lincoln costume? What about a light-skinned black man who is a make-up whiz and lightens his skin, places the moles just right, and makes himself the spitting image of old Abe? Is that as offensive as the Kanye costume? Well, the PC warrior argues, that isn’t blackface, and there is no such thing as whiteface. But the Kanye make-up isn’t blackface either: it’s Kanye-face.

Kanye is also a Kardashian, and the other current Kardashian costume being attacked as “offensive” is the Bruce/Caitlyn Jenner costume. There are two of them, in fact: 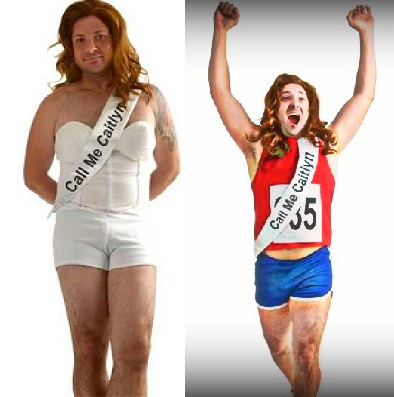 Jenner is at least as ridiculous as West; the fact that trans individuals should be supported in their quest to be treated fairly and to be free from prejudice doesn’t trans celebrities should be immune from satire.  Jenner isn’t just any trans woman, she’s a cynical, self-promoting, reality show trans woman who married into the most outrageous and culturally corrupting reality show family of them all.  She is fair game at Halloween.

“Part of the problem is that many ads for the costume showed a scruffy-faced, hairy-chested man wearing it, which sends the incorrect and offensive message that transgender women are men in dresses. “If a man wears the costume with the intention of mocking Caitlyn Jenner, and by extension all transgender women, that is just mean-spirited and unacceptable,” says Nick Adams, GLAAD’s director of programs for transgender media. “Transgender women are women, and when Caitlyn Jenner or any other trans woman steps out into the world as her authentic self, she isn’t wearing a costume.” (Two online retailers have removed this version of the costume from their sites.)”

How many more ways could this be wrong?

“Part of the problem is that many ads for the costume showed a scruffy-faced, hairy-chested man wearing it, which sends the incorrect and offensive message that transgender women are men in dresses.”

No, it doesn’t, any more than any drag costume—Queen Victoria, Marilyn Monroe, Hillary Clinton—sends the message that the Queen, La Monroe, and Hillary are “men in dresses.” I’ve never found drag funny (perhaps due to my father, who detested Milton Berle’s weekly drag bits), but it’s an old British music hall and American Burlesque tradition. It wasn’t invented to mock Caitlyn Jenner.

“If a man wears the costume with the intention of mocking Caitlyn Jenner, and by extension all transgender women, that is just mean-spirited and unacceptable,” says Nick Adams, GLAAD’s director of programs for transgender media.”

How do you know what the “intention” is? Maybe it is to be politically incorrect. maybe it is to be funny. Maybe it’s to honor Caitlyn. The intention is to dress up in a costume. It’s Halloween. Intentions are not required or relevant, and assuming intentions is unfair.

“Transgender women are women, and when Caitlyn Jenner or any other trans woman steps out into the world as her authentic self, she isn’t wearing a costume.”

Neither is Barack Obama, Donald Trump, or any other celebrity who an adult chooses to dress up as on Halloween. So what? It’s a Halloween costume.

“(Two online retailers have removed this version of the costume from their sites.)”

So two retailers were extorted, bullied and pressured into pulling the costumes. That doesn’t prove wearing the costumes is legitimately offensive, or unethical.

As with the West costume, the standards being articulated here are incoherent. Let’s say identical twin males both wear Jenner costumes, but one of them now identifies as a woman. They look identical in their costumes, but the trans twin’s costume, meant to honor Jenner, is fine, but the male twin’s is offensive?  Last I heard, Jenner has the same Y chromosome and male equipment as any guy wearing a Caitlyn costume.  Would it be more appropriate for a woman to wear it? Less offensive?  More offensive?

The same people who are offended by the Jenner costume also argue that a girl or woman should be able to be anyone they want on Halloween, that gender shouldn’t matter…unless they decide to be offended, apparently.

I have come to believe that if costumes like the obviously black humor-themed costume of “Ann Arexia”, then we should just kill Halloween as one more casualty of the humorlessness, free speech stifling, and mandated sensibilities that political correctness bullies continue to inflict on us in the name of diversity and compassion. If not, then let’s agree that anything goes, and declare Halloween a political correctness-free day where offensiveness is not merely tolerated but encouraged as an exercise in perspective, free expression, and defying dignity, fear, and societal conventions.

At the time, some commenters quibbled that I didn’t really mean anything goes. Anyone who has visited here much understands that I hold that there are always exceptions, and that they don’t invalidate rules. Wearing a costume designed to incite violence or exploit a current deepening societal divide is unethical conduct called “throwing gasoline on a fire,” and that conduct is not confined to Halloween. Wearing an Emmet Till costume with a noose, or a Mike Brown costume with his hands up, is exploiting Halloween to hurt others and cause societal damage, unless no “others” are going to be at the party. Racists have a right to have private parties too.

It is also important to recognize that people have a right to make their own assessments about the character of someone who wears a tasteless Halloween outfit in their eyes. What is wrong is to try to exploit, constrict and ruin a non-political tradition to advance political or social agendas.

12 thoughts on “Of Kanye And Caitlin: What Are Rational Ethics Standards For Halloween Costumes?”