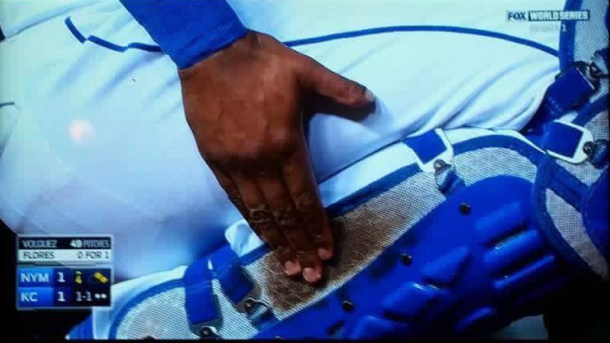 Cameras during Game #2 of the 2015 World Series revealed that Kansas City Royals catcher Sal Perez had what appeared to be pine tar on his shin guard during the game. This would presumably be there for the purpose of surreptitiously smearing some of the gunk on the ball, then throwing it back to the pitcher so he could “get a better grip on the ball,” a.k.a “tamper with the baseball so it can do loop-de-loops.” This is illegal. It is cheating. According to Rule 8.02(a)(2), (4) and (5), the pitcher shall not expectorate on the ball, on either hand or his glove; apply a foreign substance of any kind to the ball; [or]  deface the ball in any manner. The rule is unambiguous, and if a pitcher or a catcher is caught violating the rule, they are thrown out of the game with a suspension and fine to follow.

None of this happened to Perez or his pitcher that night. According to NBC Sports blogger Craig Calcaterra, a former practicing lawyer who I am officially disgusted with, the reason was that “Nobody cares,” including Calcaterra.

I wrote extensively about Major League Baseball’s unethical attitude toward violations of this particular rule last year, after an absurd sequence in which Yankee pitcher Michael Pineda was caught by TV cameras apparently using pine tar on his pitches without compliant from the opposing Red Sox, followed by Sox manager John Farrell saying that he hoped he would be “more discreet” about his cheating “next time,” and then when Pineda was more obvious about it next time, Farrell complained to the umpires, who threw Pineda out of the game (he was also suspended). I wrote,

In subsequent interviews with Farrell and others, the explanation that emerged was this gibberish: “everybody” uses something to grip the ball better when it is cold (and often when it isn’t); hitters don’t mind because they don’t want to get hit. Pineda’s offense wasn’t that he used pine tar, but that, as Farrell suggested before the game, that he was “blatant” about it. That gave Farrell no choice, you see….even though his own pitchers also use foreign substances to grip the ball (in unequivocal violation of a baseball rule), and this sets his team up for “retaliation.”

Everyone agrees that it’s acceptable  to break a rule that an umpire will throw you out of the game for breaking?

Pineda’s offense wasn’t that he broke the rule, but that he was open and obvious about it?

What kind of ethics reasoning is that? If there is a rule, enforce it. If the rule is deemed useless or ill-considered, get rid of it. To have not only a professional sport, but the professional sport’s championship series and showcase, operate by the “principle” that rules will be arbitrarily enforce and ignored and that all it takes to make cheating not cheating is for the opposing team to agree that it is cheating too obliterates the integrity of the game, the championship, and the rules. Isn’t that obvious?

Not to lawyer Calcaterra. Get a load of this: Craig writes in part…

More significantly the Mets — who would be the ones to make an issue out of it if an issue was to be made — laughed the matter off… Either for the stated reason — what [ Mets Manager Terry] Collins said about better grip [ so batters won’t get hit by pitches] (1) [  “I don’t know if  [the Mets catcher] does it. He probably does. Throughout baseball, everyone does.” (2)]— or for the more plausible reason: the pine tar or whatever it is does give the pitcher an advantage but their pitchers are doing it too, so there’s no percentage in getting into accusations over it during a game.(3) Heck, Yogi Berra was doing this for Whitey Ford before your mom was born. If Yogi did it, who are you to throw stones? (4), (5)

People like bright red lines when it comes to matters of cheating, but it doesn’t really work like that in practice. It’s dangerous to have situational ethics, but in some situations ethics are practically and somewhat understandably malleable. If the Mets are willing to look the other way — (6) and they were, either because they simply don’t care (7)or because their catchers have gunk on their shinguards too — I’m not sure where the mandate to start inspecting shinguards comes from, even if pine tar on shinguards is not, strictly speaking, kosher.

I underlined the screaming rationalizations Craig is endorsing, an impressive seven in one paragraph, two verbatim; the rest is just obviously unethical or mind-numbingly stupid. The Rationalizations are (1) #29. The Altruistic Switcheroo: “It’s for his own good,” (2)  1. The Golden Rationalization, or “Everybody does it”, (3)  3. Consequentialism, or  “It Worked Out for the Best,”   (4) 11. The King’s Pass, The Star Syndrome, or “What Will We Do Without Him?” (5) 32. The Unethical Role Model: “He/She would have done the same thing” (6) 42. The Hillary Inoculation, or “If he/she doesn’t care, why should anyone else?” and (7) 50. The Apathy Defense, or “Nobody Cares.”

His argument also encompasses two more:  30. The Prospective Repeal: “It’s a bad law/stupid rule,” and 39. The Pioneer’s Lament, or “Why should I be the first?” The stupid section is this gibberish:

“People like bright red lines when it comes to matters of cheating, but it doesn’t really work like that in practice. It’s dangerous to have situational ethics, but in some situations ethics are practically and somewhat understandably malleable. …I’m not sure where the mandate to start inspecting shinguards comes from, even if pine tar on shinguards is not, strictly speaking, kosher.”

I know for a fact that Craig isn’t stupid, so this qualifies as a full-fledged ethics breakdown. I hope it occurred in the strikingly ethically clueless world of sports journalism, because if he thought like this as a lawyer, he was lucky not to get disbarred.

“People like bright red lines when it comes to matters of cheating, but it doesn’t really work like that in practice.”

Sure it does. If a player breaks a rule that is in black and white in the Rule Book, unambiguous and clear like this rule, he’s cheating, and should be stopped and punished. “But it doesn’t really work like that in practice” just means, “Thanks to corrupt and unethical people who think like me,” cheaters often get away with it.

“It’s dangerous to have situational ethics, but in some situations ethics are practically and somewhat understandably malleable.”

In other words, situational ethics! “Malleable” means that one changes one’s ethics to meet one’s needs: that’s not ethics, that’s making up rules and values as you go along; that’s expediency. “Somewhat understandably” is lawyer-talk for “I know this is bullshit, but I bet I can slip it by the dumb ones.”

Well let me explain it for you, Craig: the mandate comes from the fact that there’s a rule against a pitcher using pine tar on pitches, players are doing it anyway, in the World Series, and umpires are charges with seeing that the rules are obeyed.  Clear now?

“…even if pine tar on shinguards is not, strictly speaking, kosher.”

Utter deceit. This also a variation on Hillary’s trademark rationalization, 19A The Insidious Confession, or “It wasn’t the best choice,”   minimizing an offense by a misleading description. Not only isn’t it “strictly kosher,” it’s flat-out illegal, banned conduct. Saying it’s not strictly kosher is true, but misleading. Not strictly kosher means not kosher, and kosher, in a non-Jewish faith context, means genuine, legitimate, proper, above-board, genuine, correct, legitimate, legit, fine, admissible, acceptable, or orthodox. Things that are not any of those things may be illegal, but kosher still doesn’t mean legal.

If a rule is determined to be a bad one, then eliminate it. Until it is eliminated, violating it is cheating. Teams can’t eliminate a rule by mutually agreeing to violate it. Does Craig think two lawyers agreeing to fabricate evidence and encourage perjury would eliminate the unethical nature of their conduct? Does he think the trial would still have any integrity if that was allowed to occur? I know: baseball isn’t the justice system.

But rules are rules.

21 thoughts on “World Series Ethics: Another Pine Tar Sighting, As Baseball Ethics Rot Gets A Thumbs Up From Legal Ethics Rot”