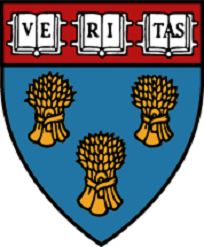 See that seal to the left? Apparently that is a racist symbol that must be banned. At least that’s the conclusion a group of Harvard Law School students have come to, thus compelling my conclusion that either Harvard Law School is no longer a trustworthy institution for training young minds in relentlessly logical analysis as the practice of law at 400 bucks an hour requires, or that it is admitting too many students so indoctrinated in mindless progressive cant that they are beyond help.

These young adults need to skip the law and go straight to community organizing.

I’m sure all of you saw the bushels of wheat in the Harvard Law School seal and immediately recoiled in disgust and horror. No? That’s because need a masters in Obscure Harvard History to understand what these fanatics are complaining about:

From the Harvard Crimson:

A new student movement at Harvard Law School is organizing to change the seal at the school, which the students argue represents and endorses a slaveholding legacy. The seal is the coat of arms of the family of Isaac Royall Jr., a slaveholder who endowed the first professorship of law at Harvard.

They have launched a Facebook page and are now in the process of further organizing. They are drafting a letter to send to the Dean of the Law School Martha L. Minow with their positions, according to Mawuse H. Vormawor, a Law School student and organizer of the effort. Students involved in the effort argued that imagery from a slaveholding era has no place at today’s Harvard Law School.

“These symbols set the tone for the rest of the school and the fact that we hold up the Harvard crest as something to be proud of when it represents something so ugly is a profound disappointment and should be a source of shame for the whole school,” said Alexander J. Clayborne, one of the Law students involved.

Vormawor pointed to the research and scholarship of visiting Law School professor Daniel R. Coquillette, who recently published a book about the first century of Harvard Law School, as inspiration for the movement. In the book, Coquillette details the relationship between the Royall family’s slaveholding and the endowment of the Law School.

Thus proceeds the process of airbrushing history, withdrawing credit that has been justly  earned, and judging past figures  by the standards of today. This is a particularly silly example, as the design of the seal is likely to be meaningless to 99% of Harvard law students, not to mention 99.99999% of everyone else.

It’s not an ugly seal. It’s just a boring seal. I don’t recall noticing it and I was on the Harvard campus a lot,  since my mother worked there. I guess the seal was on the application I filled out when I applied to the law school (I was rejected—twice). Maybe the school should include a little explanation on its letterhead about how the bushels might as well be a drawing of Simon Legree.

Harvard Law School might not exist were it not for Isaac Royall Jr., since his bequest was used to establish it. Any institution must always recognize debts to its founders: the ethical principles are loyalty and gratitude. Those who attend allegedly intellectual institutions should also be able to figure out that it isn’t 1719 (when Royall was born), and that when he endowed the law professorship, his belief that blacks were inferior to whites was nearly universal among whites, in the Colonies and everywhere else.

Even Professor Coquillette, who calls Royall “a coward, and a brutal slaveholder,” believes that the student protest is misguided.

“As a historian…you just deal with the fact that this guy founded the school and tell the truth about it,” he said. “To change things is to act like [they] didn’t happen, and that’s a mistake.”

That is the prevailing trend, however. I received criticism in July when  I wrote about the significance of taking away Bill Cosby’s bust in Disney World and trying to remove the names of Confederate generals from schools  in this post, especially the part where I suggested that the trend, if unchecked, would lead directly to the Jefferson Memorial. I concluded the post writing:

There is no stop to this slippery slope, for the political correctness mob will never stop. Stop airbrushing your history, your heroes, your geniuses and your trailblazers, America.  It is wrong—dishonest, incompetent, unfair, irresponsible, destructive….and so, so short-sighted and stupid...Because this isn’t just airbrushing. It is bulldozing. And the culture, history and perspective it will leave the nation with will be flat, bleak, and a lie.

So I now ask those critics, do you still think it is so unimaginable that a generation of American leaders in the near future, educated in the most prestigious of our universities, won’t insist that Thomas Jefferson’s face on Mount Rushmore and his prominent memorial on the Potomac are both a “source of shame” for the whole nation?